Long COVID and why choosing to expose children to infection rather than vaccinate them is negligent and harmful.

Let’s do a deep delve into Long COVID – this syndrome that some in the Joint Committee on Vaccination and Immunisation (JCVI) are in denial about!

Long COVID is a real multi-system syndrome that occurs in those infected (far more common than in uninfected controls), predominantly impacting the young.

Let’s do a deep delve into this syndrome that some in the Joint Committee on Vaccination and Immunisation (JCVI) are in denial about!

(Sadly, some scientists on the JCVI, who decide whether our children get access to vaccines or not, believe it is not really serious enough to consider vaccinating children – and that it is better to infect them.)

Some stats first. There are several studies that now put the overall incidence of long COVID as between 10-50% of those infected, depending on symptoms studied and cohorts studied. Let’s look at some of these.

First, ONS data and REACT-1 data. These are some of the most robust data on long COVID. Why?

The ONS data compares symptoms post-infection among those infected with control groups of those confirmed not to have the infection. Persisting symptoms were 8 times more common among those testing positive with PCRs compared to those who were negative.

This strongly challenges the rhetoric by some about ‘floating numerators’ and that this is ‘background symptoms’ in the population. The ONS survey showed very clearly that 13.7% of those infected (1 in 8) developed long-term symptoms superior to 12 weeks compared to less than 2% in control groups.

“But it doesn’t affect young people.”

It absolutely does! The majority of those affected are less than 50 years old.

“But it’s just mild symptoms that don’t matter, and most people only have one symptom.”

Unfortunately, there is a plethora of symptoms, and many of them are very common, so many people present with a combination of symptoms. The ONS only examined 21 – there are hundreds of symptoms.

This means the ONS estimate may be underestimating the prevalence of long COVID considerably.

Also, these symptoms are not mild. Of the around 1 million people affected, two-thirds said it impacted their day to day activity. And 400,000 have had persistent symptoms for more than a year.

These 400,000 sadly include 9,000 children who have been affected for more than a year. This isn’t a mild syndrome or a short one for thousands of our young who have been impacted due to policies where they were forced to go into unsafe environments without adequate mitigation.

So, what does the REACT-1 study, which examined more than half a million people, show? This study is limited to the 18 and over in England. It examined 29 symptoms, and showed 1 in 3 people with COVID-19 had symptoms lasting more than 12 weeks. This included young adults.

Numbers and proportions of participants who reported one or more symptoms. | Imperial College London

For most affected, this wasn’t a single symptom. It was a combination of many symptoms, e.g. 20% of those infected reported 3 or more symptoms and 17% reported 4 or more symptoms at 12 weeks. — Note that there isn’t much drop off in the prevalence of symptoms after 12 weeks.

Plots showing persistence of symptoms as a proportion of those who reported symptoms at any time. | Imperial College London

So, if symptoms persist for 12 weeks as they do in 1 in 3 people as per the REACT-1 study, they tend to persist for much longer (up to 22 weeks or more).

Also, one-third of those with one symptom persisting said it impacted their day to day lives – that is just above 10% of cases.

That this is a disease that affects the most disadvantaged and women more might explain why many are happy to dismiss it. 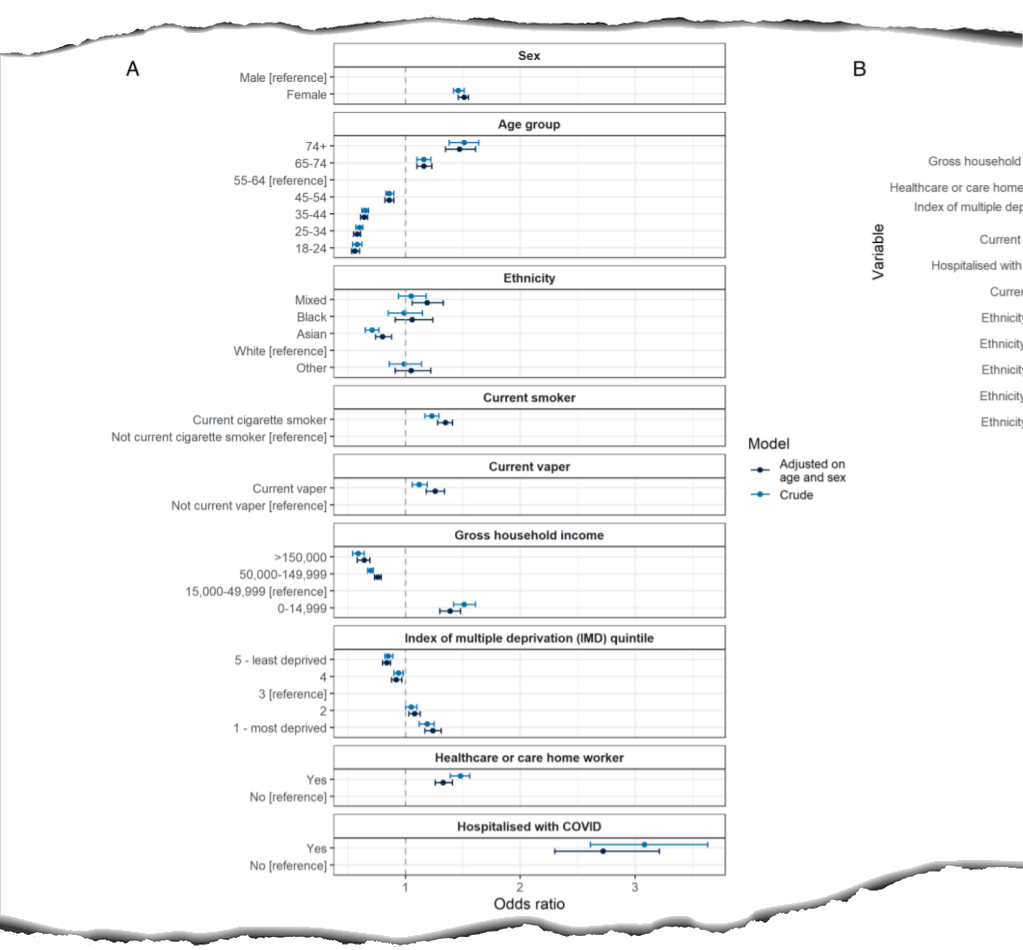 So, to summarise, long COVID is common – even in young people with mild infection who don’t have to go to hospital. And it also affects children, and is usually multiple symptoms, that in many affect day to day lives.

Let’s look at other data now.

The cognitive symptoms (brain fog, memory loss, difficulty concentrating, sleep disturbances) tend to become prominent later in long COVID, and also last longer. These are worrying also because there are now studies showing the virus affects the brain, even in younger people.

I have summarised some of the evidence here. There is strong evidence now that even those with mild infection can have long-term structural brain changes, including thinning of grey matter is specific brain areas related to smell, taste, memory, and emotion.

Neuro-psychiatric disease is common post-COVID even among those not hospitalised with severe infection.

COVID-19 also appears to be associated with increased risk of strokes, and other neurological conditions at 6 months post-infection:

What else do we know about what COVID-19 does to our immune system?

There is good evidence now that acute infection with COVID-19 leads to a plethora of auto-antibodies against many tissues in our body. We do not know the impact of these fully yet.

We also know that acute infection has impact on many organ systems in those affected with severe infection, including among young people. A recent study of over 70,000 hospitalised patients showed that half had at least one organ system affected – lung, kidney, heart, brain or gut.

The risk of organ dysfunction was 38.9% in those aged 19–49 years – clearly impacting a very high proportion of young people as well.

Another large study among those hospitalised in England showed that 1 in 3 were re-admitted after discharge, and 1 in 10 died within 5-6 months. This was 4-8 times higher than in the control hospitalised group studied – matched on many factors.

Organ disfunction was common, and far more prevalent in those hospitalised with COVID-19 than in the control group. And more associated with COVID-19 in under 70s compared to over 70s.

There are also many studies that suggest SARS-CoV-2 impacts our immune system – including T-cell ageing and dysregulation of immune responses following infection. There is also evidence of virus persistence in some tissues.

I hope this will go a way to convince those who still aren’t that long COVID is a biologically complex syndrome that is common and concerning. It impacts young people, and is often quite functionally severe and debilitating. So, let’s not minimise this.

Yes, we don’t fully understand the underlying pathology yet, and this will take time, but all indications are that it is serious – even in children. And very likely affects multiple organ systems, with long-term impacts even on young people.

So, there is uncertainty, but this uncertainty doesn’t mean we can ignore these very real risks – when all signs are pointing in a very worrying direction. We must adopt the precautionary principle and protect our young from this multi-system chronic disease.

There is scientific consensus that this is not just a respiratory disease, but a multi-system one. Here is a really good review from Nature on this.

Choosing to expose children to infection rather than vaccinate them, when millions across the world have been safely vaccinated, is negligent and harmful. We are exposing children to a multi-system chronic illness we don’t understand and don’t know how to treat.

If you are one of the scientists who made this choice, please be honest that this is ideology, and not science. Because the evidence tells us to be very very cautious about exposing children to infection, and that the benefits of vaccines far outweigh harms.

I partly wrote this so anyone could use it to counter false narratives and unevidenced critique from long COVID deniers. Please, feel free to share this piece to anyone who suggests that there isn’t strong evidence for long COVID.

They can then engage on facts.

ps. I also wanted to add that there is some amazing patient-led work in this area which looked at 74 symptoms of long COVID, and consistent with many other studies showed that neuro-cognitive symptoms tend to increase and persist over time, which is deeply concerning.

Blowing bubbles is dangerous for children.

“We are now storing up trouble for the future” – Experts.

Home Office: Loved ones are left in limbo for months on end.

Government has more interest in allowing vulnerable children to be targeted by traffickers than tackling traffickers.