Brexit. Assessing the mood in Stratford-upon-Avon.

A sizable proportion of the British public has resisted the Eurosceptic propaganda over the years and retained a healthy scepticism not towards the EU, but towards our present government.

Saturday 20 November saw a coordinated “action day” by members of the European Movement across the country. The European Movement is the largest pro-European organisation in the UK, and its main pro-European voice. Its current slogan is “Brexit isn’t working”, and the object of the action day was to assess how well this reflects public perceptions, as well as to promote the aims and values of the movement.

The movement’s branch in Stratford-upon-Avon is Stratford4Europe. We pitched our stall outside the main post office. It would be particularly interesting to take a snapshot of current opinion in this town, which voted 52:48 in the referendum five years ago, exactly paralleling the national picture.


We had been prepared for a depressing experience. After all, Brexit was supposed to be done and dusted and many folks would not be sorry if they never heard the B-word again. Despite these misgivings, about a dozen core members of Stratford4Europe turned out to test the water and were pleasantly surprised at the relatively friendly reception we were accorded.

The centrepiece of our street stall was a “Brexitometer”, a large whiteboard with questions requiring simple yes or no answers, plus a table with leaflets expounding the theme that “Brexit isn’t working”. It was not immediately obvious to passers-by which side we were on, some wondering whether we were Brexiters complaining that the Government’s approach wasn’t radical enough. This we deemed to be an advantage, as we wanted to engage people from both sides of the debate. 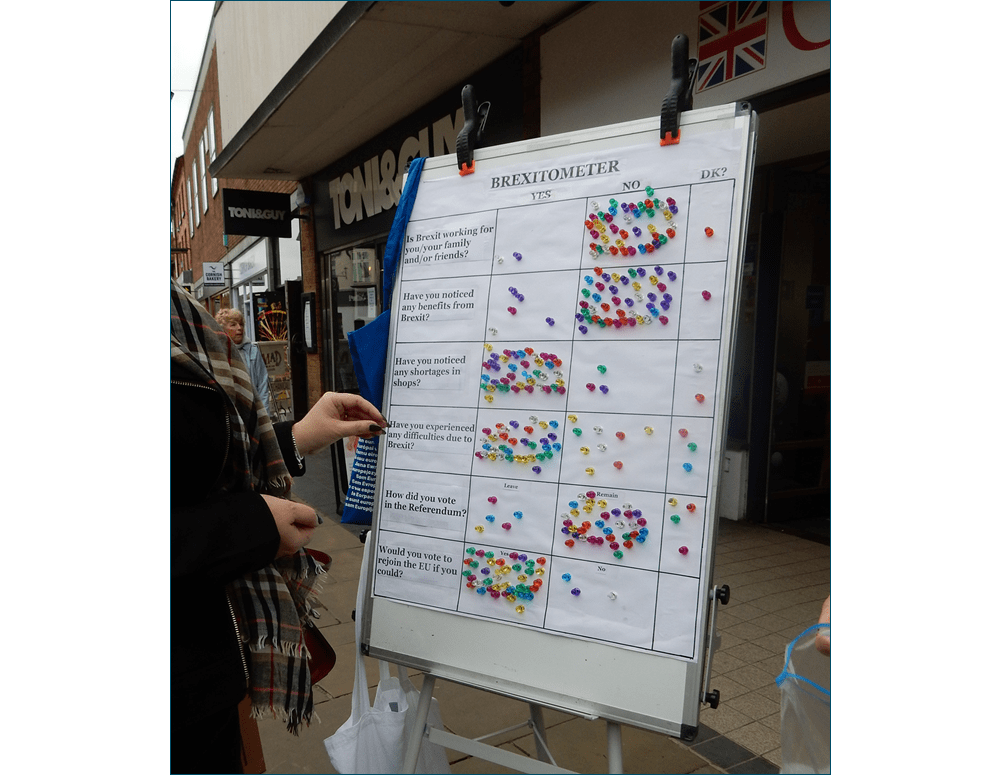 As it turned out, most (about three quarters) of those who stopped to talk to us were people who had voted Remain, some of whom expressed pleasure that the European cause had survived and was still alive and kicking. In contrast, those who voted Leave seemed to find the subject aversive, not something they wanted to talk about or think about, something best forgotten.

Outright hostility from Leavers was less in evidence than when we campaigned in 2019, though there were occasional negative reactions along the lines of “We’ve got to get right out, get rid of them”. Who “them” might be was unclear, and before we could ask the gentleman had disappeared, but one suspects that if we asked if he meant the Italian waiter at his local restaurant, he would have said no, of course not.

Those who took part were invited to answer six questions about their view of Brexit and whether it was working, by placing small, coloured magnets on the whiteboard. Exhorting them loudly to do so and to excellent effect was one of our numbers, with his refrain of “Roll up, roll up! It’s five seconds of pure pleasure, completely free. Stick the magnets anywhere you like!” And they did roll up, often queuing for the privilege of expressing their view that Brexit was not working.

As at all similar street stalls, there were those who hurried by, intent on their day-to-day business. But many did accept our leaflets. The event also provided an opportunity to meet like-minded souls and to reaffirm that the candle still burns for those who want to rejoin, even if the wait might be a long one.

The view that David Cameron’s referendum was unasked for and unnecessary was heard more than once. Some people were doubtful whether the EU would ever have us back, after we had behaved so deplorably.

Overall, what impressed us was that despite the relentless barrage of vitriolic propaganda against the EU, to which our dominant Eurosceptic media have subjected us over so many years, a sizable proportion of the British public has resisted these blandishments. They are not so easily fooled, and they retain a healthy scepticism not towards the EU, but towards our present government.

Over 80% felt Brexit was not working and would vote to rejoin the EU if they could.

Brexit is clearly not working in Stratford-upon-Avon.

It’s the newspapers’ fault if Boris Johnson was pictured on a train maskless – Business minister.