Damning documents and testimonies from researchers working with Professor Didier Raoult claim that biological results were falsified in order to demonstrate the effectiveness of hydroxychloroquine against COVID-19.

Independent French online investigative magazine Mediapart has had access to damning documents and testimonies from biologists, doctors, interns and assistants working with Professor Didier Raoult – the French microbiologist specialising in infectious diseases who familiarised and promoted hydroxychloroquine as a treatment for COVID-19 despite the lack of evidence for its effectiveness – who talked of “regrettable scientific and ethical practices” and claim that biological results were falsified in order to demonstrate the effectiveness of hydroxychloroquine.

The Mediapart journalists accessed the transcripts of a series of one-hour interviews conducted in October by the Université of Aix-Marseille, the Assistance publique-hôpitaux de Marseille (AP-HM), the Institut de Recherche pour le Développement (IRD), and Inserm.

During the interviews, several members of the Institut Hospitalo-Universitaire Méditerranée (IHU) who work with Didier Raoult described a reality that is far removed from the one presented by the professor who likes to boast that his teams include 10% of the most cited French researchers. 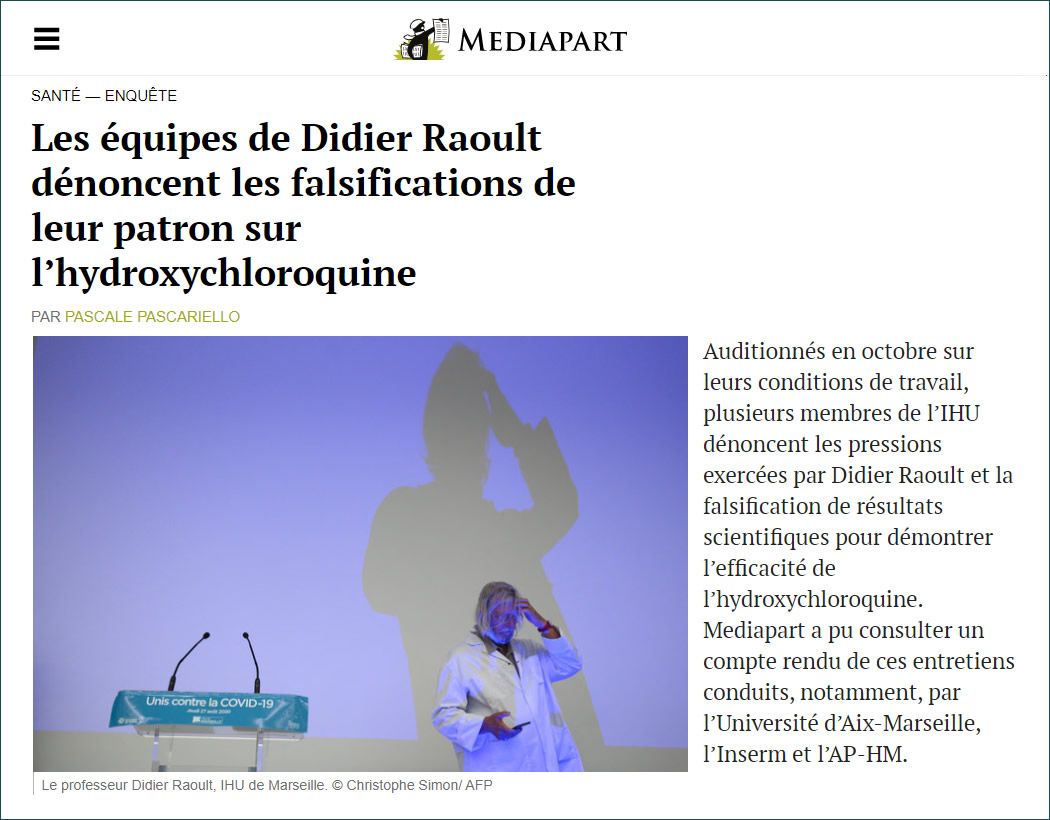 “There has been no real science behind the IHU’s publications for years,” one of the researchers explained. “The results presented must correspond to the hypotheses made by Didier Raoult. If not, the people concerned may be publicly devalued and their competence questioned.”

According to the documents seen by Mediapart, members of the IHU claimed that the “increased media coverage of Didier Raoult” then fuelled a “climate
of cult of personality” with the “broadcasting of videos of Didier Raoult on a
loop, inside the building.” Any criticism of the treatment became therefore impossible. “The absence of contradictory debates within the IHU reached such a paroxysm that the slightest question was unwelcome.” In staff meetings, for instance, if anyone asked a question, the answer would often be: “Shut up, you’re not paid to think!”

In vitro testing of Hydroxychloroquine and Azithromycin on SARS-CoV-2 shows synergistic effecthttps://t.co/KUaag6N5FF

When Professor Didier Raoult started to claim that Hydroxychloroquine was working. | Twitter

The staff interviewed explained that they witnessed the falsification of biological results that led to the conclusion that hydroxychloroquine had a beneficial effect. As the results of PCR tests in a study comparing patients from the IHU taking the treatment and patients from the Nice University Hospital (control group without hydroxychloroquine) not taking it “did not go in Didier Raoult’s direction”, the two groups of patients were analysed using different criteria. The threshold of positivity of the tests was modified which meant a greater number of results negative for patients in Marseille and therefore showed that hydroxychloroquine had a beneficial effect.

In order to do this, Professor Didier Raoult “removed the biologist doctors from
the schedules” and in return set up a software to automate the results favouring negativity, without prior validation by the researchers.

“The results thus presented must correspond to Didier Raoult’s assumptions. Otherwise, [the researchers] may be publicly demeaned and their competencies questioned,” Mediapart reveals.

Other journalist investigations have recently documented what seems to be a total disregard for scientific ethics and the law in dozens of studies published by the professor who was just a couple of weeks ago before the disciplinary chamber of the Nouvelle Aquitaine’s Order of Physicians, accused of violating the code of medical ethics by promoting hydroxychloroquine against COVID-19. A year ago, the Council of the Order of Physicians of Bouches-du-Rhône and the National Council of the Order of Physicians took legal action against Didier Raoult. A decision should be made on 3 December.