Given the potential threat of Omicron, it makes sense to assume a worst-case scenario and plan for this, rather than respond too late.

I know people will accuse me of ‘fearmongering’, but I am really concerned by the potential threat posed by Omicron. Why?

On Friday, we heard about the detailed work done on surveillance and characterisation of this new variant from South Africa. It has far more mutations compared to the original variant compared to Delta.

Many of these are shared with other Variants of Concern (VOCs), while many are new:

From an epidemiological perspective, the aspects that are most worrying are:

1. A rapid increase in frequency of this variant in Gauteng and other South African provinces against a Delta background. While the sequencing data will be skewed (figure 1), data from PCR testing shows rapid growth (figure 2).

As this variant (like Alpha) is detectable on PCR tests (it shows a spike dropout, also called SGTF), we can look at changes in frequency across multiple provinces.

It shows consistent rapid rises to dominance or near-dominance across all regions, although samples are small in some.

It is worth remembering that Delta took 6 weeks or more to gain dominance in most regions. Here, we are seeing a variant that has likely been detected early (given the signature on PCR tests) that has rapidly gone from 0% to 40-60% in a matter of weeks (2 weeks or so). That is very worrying.

2. The rise in frequency is associated with an increase in R – this is something we saw with both Alpha and Delta – and once again suggests that it increases transmission, either through increased transmissibility, escape, or more likely both.

Gauteng currently has an R of about 1.9, with the Omicron variant being dominant, which again suggests a high effective R for this variant and a considerable advantage over Delta.

While this advantage might be different in different contexts (background transmission, background immunity), it does suggest a very high level of fitness relative to Delta (escape, transmissibility or both) in the South African context currently.

For a variant to become dominant so quickly, we might expect a growth advantage 5-6 times higher than Delta. Of course, this is not definitive in any sense, given we need to look at this in different contexts, but it is very concerning, even as we wait for more data.

It is worth remembering that this growth rate does not really tell us about Ro or transmissibility, because both escape and transmissibility confer an advantage, and we still don’t know who is susceptible to Omicron, and the level of cross-protection from Delta and other variants.

Worryingly, it has spread quite rapidly across South Africa, which suggests that it has very likely spread to many other countries as well. We have already identified cases in Israel, Belgium, and the extent of spread will be greater than we know. 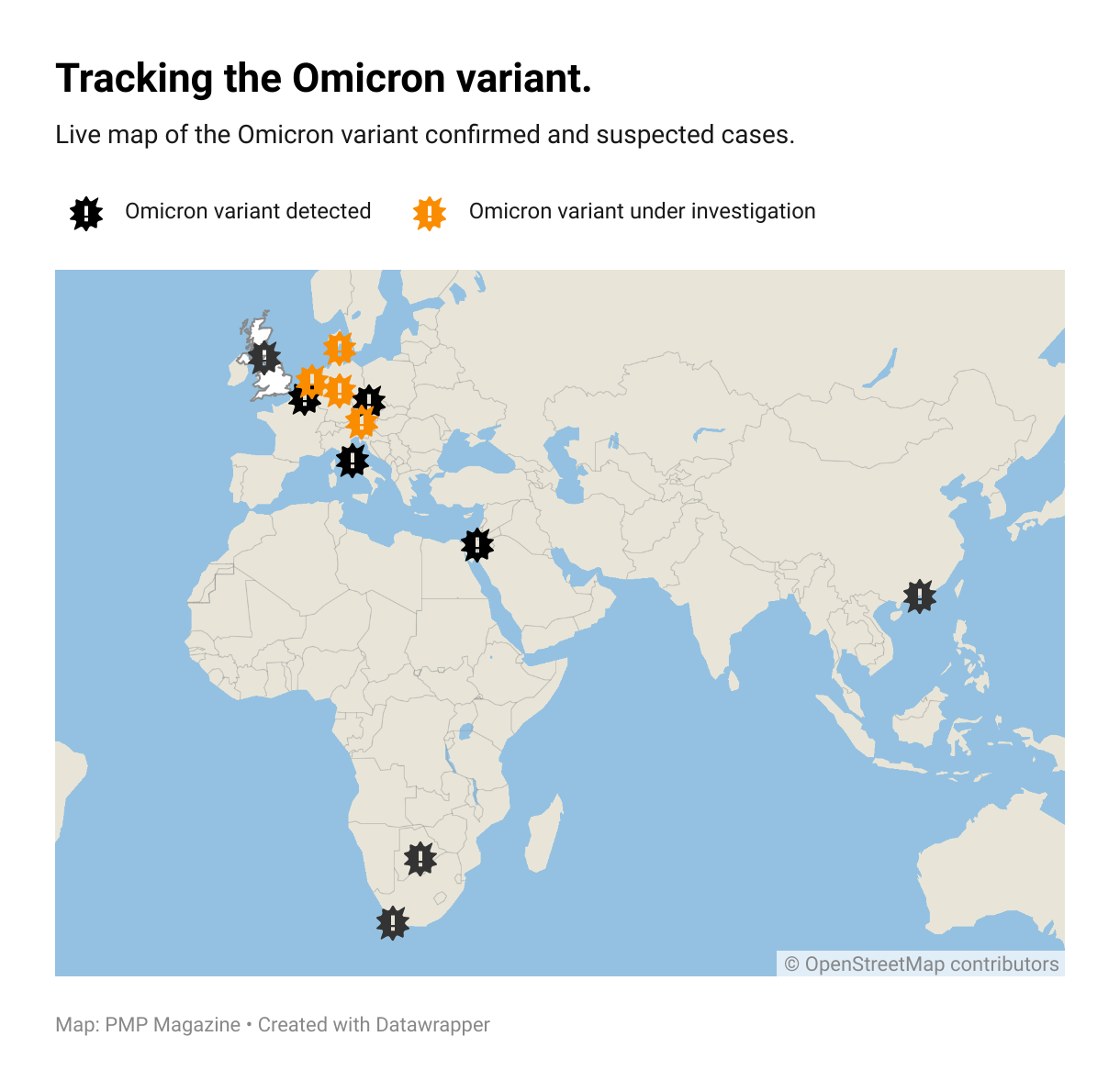 Although there is much uncertainty, given the potential threat, it makes sense to assume a worst-case scenario and plan for this, rather than respond too late. If the response turns out to be an overreaction, it can always be scaled back.

But missing early opportunities to contain a real threat will be fatal. As with Delta. This means strict border restrictions – not just prospective red list bans, but more comprehensive mandatory quarantines across the board (given this is likely widespread).

PCR testing with TaqPath assays that are able to detect these variants in travellers and those quarantining, as well as retrospective identification across people who have travelled in from affected areas recently.

The holes in the UK response concern me.

Israel is already taking many of these measures, and other countries should follow.

Given this variant is already in the UK, given the rapidity of spread, we also need to consider domestic measures to contain this, as Israel is doing. This variant is likely to outpace surveillance efforts given the sort of spread seen so far.

This means we cannot rely solely on test, trace, isolate, and support (TTIS) to contain it. We need to take measures like mask mandates (high-grade masks), and strict mitigations in classrooms, where the spread of Alpha and Delta initially happened, and Omicron will also likely happen if it does enter the community.

It also means speeding up vaccination efforts – boosting and vaccinating children – while the variant may show a degree of escape. Every single layer is needed and will help. Israel is putting HEPA filters in classrooms – we should speed this up in the UK as well.

Border restrictions are vitally important, even if the variant is present here already because this can slow spread, which may give us vital time to prepare a response to protect the public and the NHS maximally – particularly at a point where the NHS is already in crisis.

Before I get accused of more fearmongering, I don’t know if the variant will have all the properties above, but the signs aren’t good, and so far it looks like a possible step change from Delta. I hope I am wrong about this, and that future research shows otherwise.

But it is best to plan for the worst, rather than get by on hope. It is much better to overreact than underreact given the potential of this threat. And signs so far suggest that the potential threat is high.

In Iran, one man exercises complete control for his lifetime. In the US, it’s now six people.

Government could be forced to come clean over VIP Test and Trace contracts.

The G7 has returned to being a gentlemen’s club.