Meat-eating is a big climate issue – but isn’t getting the attention it deserves.

Coal, cars, cash and trees: but what about the cows?

UK prime minister Boris Johnson launched the COP26 climate summit in Glasgow with the mantra of “coal, cars, cash and trees”. But thus far the summit has largely ignored the elephant in the room. Or rather, the cows, pigs, chickens and fish.

The global food system is currently responsible for about a quarter of all human-made greenhouse gases, a figure that is projected to increase. The increase in food system emissions alone threatens warming above 1.5℃. There is no doubt we need to stop burning fossil fuels, but reducing livestock consumption in high- and middle-income countries is also vital to both protect the climate and restore nature.

Governments at COP26 have pledged to halt deforestation and cut methane emissions by 30% by 2030. Eating lots of meat is a big driver of both, but so far no reduction targets have been announced. The pledge to protect nature signed by 45 governments didn’t mention meat consumption at all, while the US agriculture secretary claimed in an interview that Americans don’t need to produce or eat less meat at all.

Here are four reasons why less meat (and dairy) on our plates needs to be on the table at COP26.

It is not very efficient to feed plants to livestock when we could eat the plants directly ourselves. Even though cows, sheep and goats can eat grass, unlike humans, they still need lots of land for grazing which could otherwise store more carbon dioxide as natural forests, grasslands or bogs, or in some cases be used to grow plant crops for human consumption. These animals also produce substantial amounts of methane in their digestive systems, which is a powerful greenhouse gas.

The carbon footprint of beef and lamb is roughly three times higher than that of pork, poultry or farmed fish per 100g of protein, and 24 times higher than pulses such as beans and lentils. Livestock produces just 18% of global calories and 37% of protein but is responsible for more than half of food’s greenhouse gas emissions.

Small amounts of meat and dairy have a role in sustainable food systems, while some plants have quite high environmental impacts and some nuts use lots of water. But in general, even meat with the lowest carbon footprints still has higher emissions than the highest emitting plant-based foods which are high in protein. 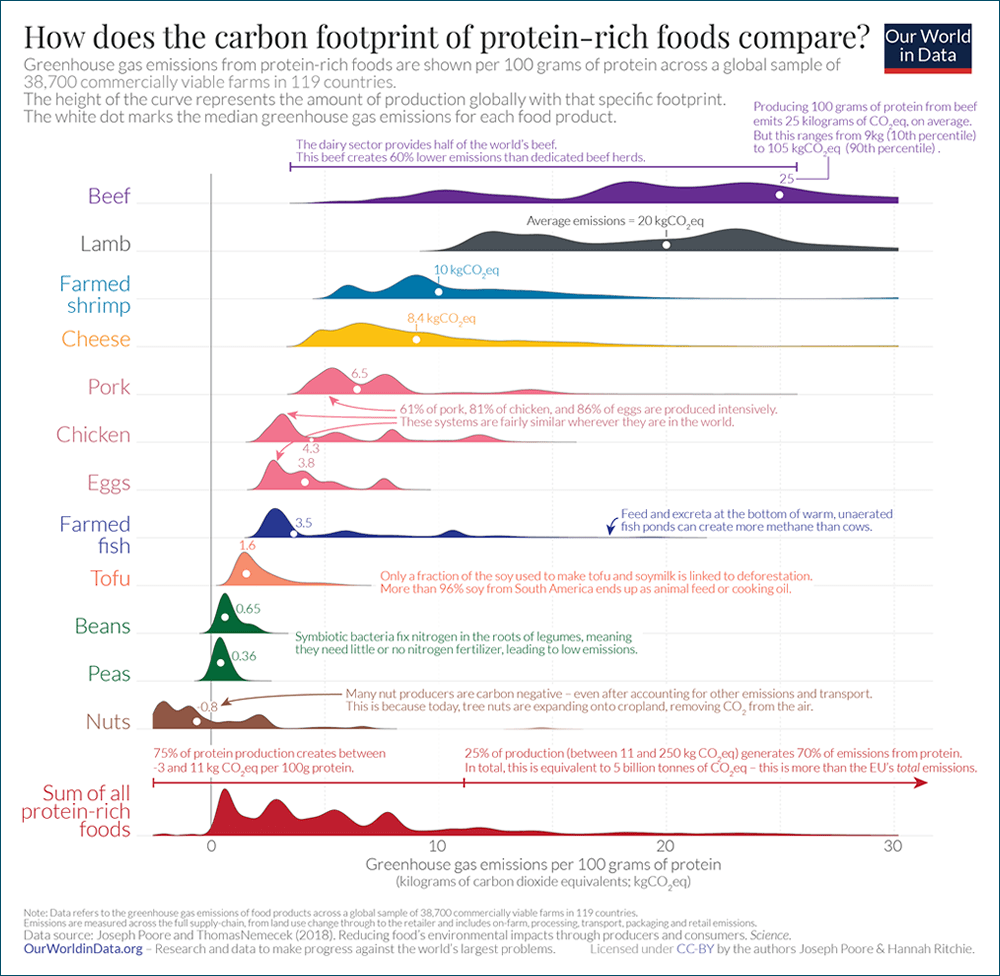 Beef and lamb are by far the most carbon-intensive sources of protein. Some nuts can even be carbon negative, if the nut trees are grown on former croplands. | Data: Poore and Nemecek, Science / Chart: Our World in Data, CC BY-SA

Farmland takes up 50% of Earth’s habitable land, and the vast majority of that farmland is used for livestock and their feed. Farming is the leading cause of natural habitat loss, which is the biggest threat to wildlife. Beef production is the top driver of tropical forest loss.

Eating more meat means that more natural habitat needs to be cleared and deforested, and the diets of people in high- and middle-income countries can be key drivers of global deforestation. Conversely, reducing meat consumption would free up land which could be restored to benefit people and wildlife, and store carbon.

3. Meat production has quadrupled since the 1960s

Since 1961, meat production worldwide has quadrupled as meat supply per person has almost doubled (from 23kg to more than 43kg) and the human population has more than doubled (from 3 billion to 7 billion).

Meat consumption is also very unevenly distributed. Just as richer countries tend to have higher greenhouse gas emissions, they also tend to eat more meat. For example, the average US citizen is supplied with 124kg of meat a year, whereas in China, Nigeria and India it’s 61kg, 7kg and 4kg respectively. 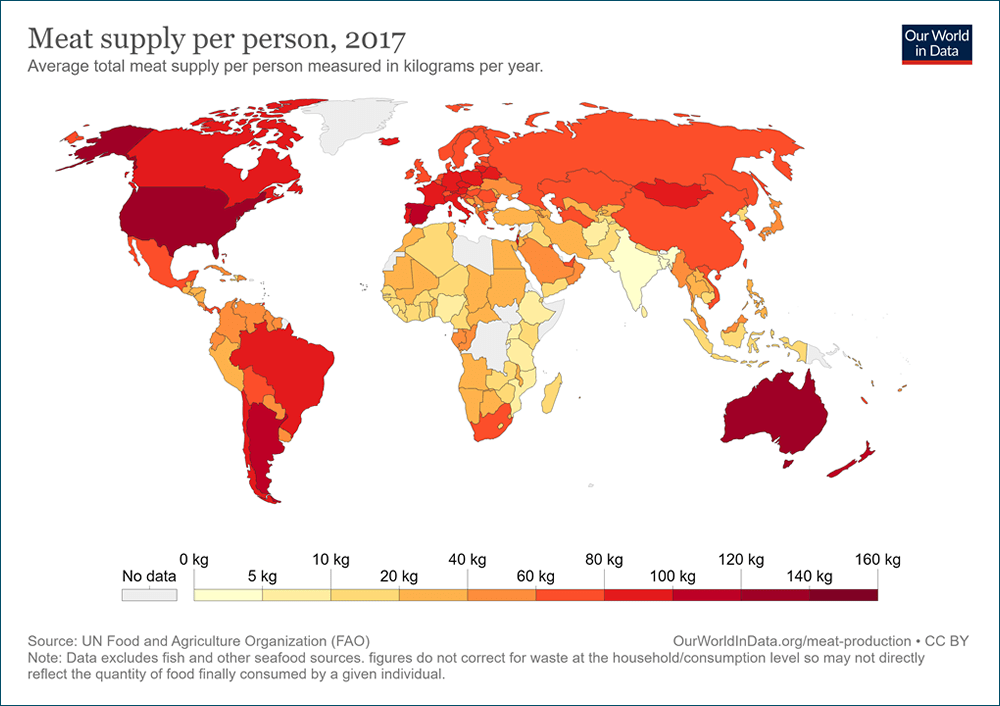 A map of global meat supply looks similar to a map of carbon footprints or average incomes. | FAO / Our World in Data, CC BY-SA

Healthy and sustainable diets broadly overlap: diets with small amounts of red and processed meat, and high in vegetables, wholegrains and pulses. There are some important exceptions: oily fish benefits health but the fuel used by fishing boats means it generally has higher greenhouse gas emissions than plant-based proteins, while many fish populations are overfished. Sugar, on the other hand, has a relatively low environmental impact but doesn’t have any nutritional value besides calories.

The Planetary Health Diet – a healthy diet designed to minimise environmental damage – recommends on average three small portions of meat, two small portions of fish and seven glasses of milk a week. However, many of the poorest people in low-income countries eat less meat and fish than this or don’t have access to healthy alternative foods. They could benefit from increasing, not decreasing, the amount of animal products they eat. This makes it even more vital that people eating lots of meat, fish and dairy cut back.

There are many different policies that could make healthy and sustainable diets more accessible. These include removing subsidies for livestock farming, helping livestock farmers to transition to alternative farming systems, making menus mostly plant-based, and promoting behaviour changes through prominent positioning and cheaper prices for healthy and sustainable food. Education and public information – while important – won’t be enough by themselves. We need to step up to the plate: the planet depends on it.

How Omicron was found and what we know so far.

Our meat obsession is destroying the planet – The solution is to change how we see animals.

Either we kill coal or coal will kill us.

Five things you need to know about the Glasgow Climate Pact.