What are the symptoms of omicron?

Omicron is continuing the trend set by delta, causing symptoms that resemble the common cold, suggesting that the current government’s guidance for PCR testing (based on only three symptoms) is woefully outdated.

For nearly two years, millions of members of the public have been submitting daily health reports to the ZOE COVID Study, helping us to track the pandemic as it unfolds. In particular, the 480 million reports submitted via the study’s app have shown that as the virus has evolved, so too have the symptoms it causes.

Back in 2020, it quickly became clear that the original and alpha versions of the coronavirus caused three very common symptoms – cough, fever and loss of smell – as well as at least 20 others. These included fatigue, headaches, shortness of breath, muscle pains and gastrointestinal problems, as well as more unusual phenomena such as skin rashes and “COVID tongue”.

When delta appeared, we then noticed a shift in the most frequently reported symptoms. Previously common symptoms such as shortness of breath, fever and loss of smell fell down the rankings. Cold-like symptoms – including a runny nose, sore throat and persistent sneezing – became more common, along with a headache and cough, particularly in people who had been vaccinated.

Omicron appears to be continuing the trend set by delta. It’s causing symptoms that are much more like a regular cold, particularly in people who’ve been vaccinated, and fewer general systemic symptoms, such as nausea, muscle pains, diarrhoea and skin rashes.

We looked at health reports from people who reported having COVID in December, as omicron spread through the UK, and compared them with data from early October when delta was the dominant variant. We then checked our findings from this comparison by also analysing data from a small group of contributors who had been told by the government that their positive PCR results were suspected or confirmed omicron infections.

Our analysis showed no significant difference in the overall symptom profile of delta and omicron, with the top five symptoms in both time periods being a runny nose, headache, fatigue, sneezing and a sore throat. But when it comes to the overall prevalence of the symptoms, there are some clear differences. 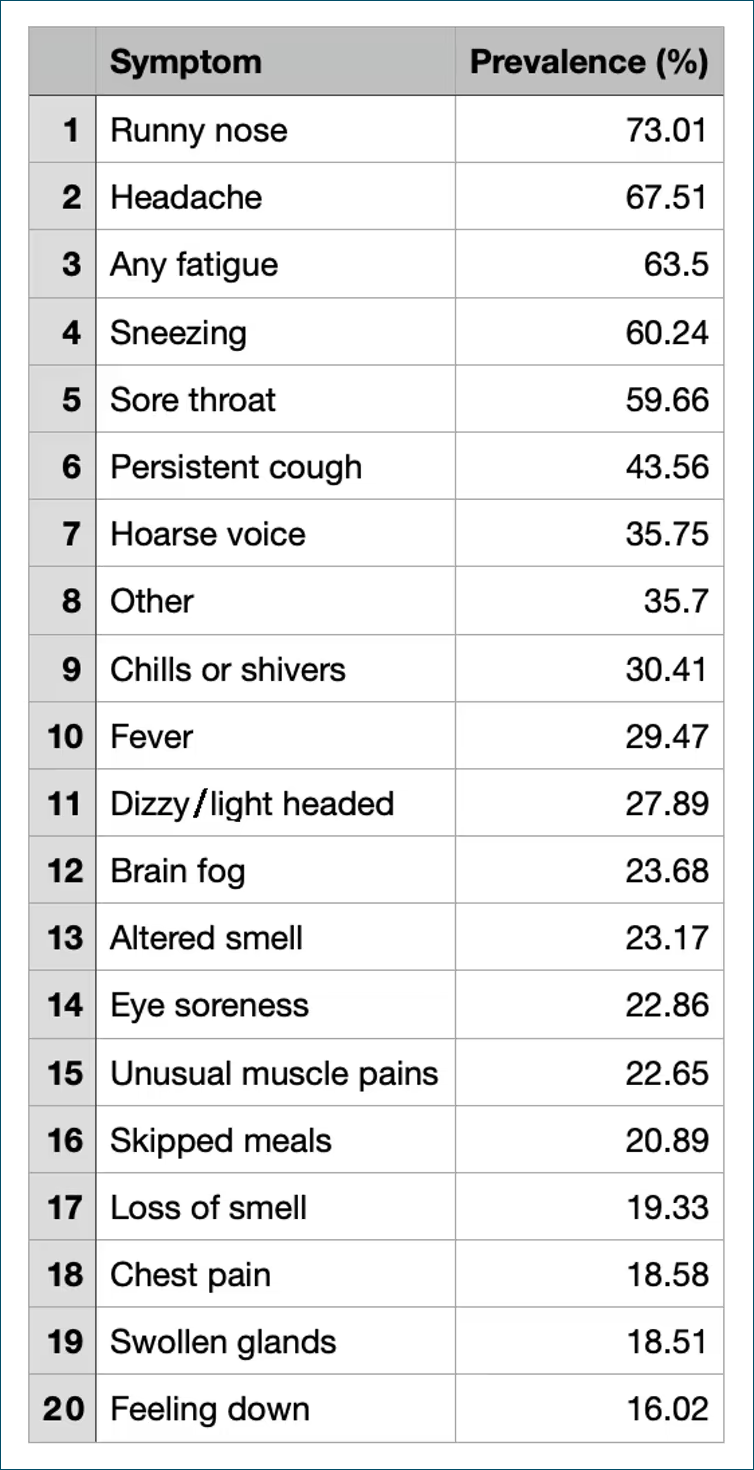 For example, anosmia (loss of smell or taste) was in the top ten in October but has fallen to 17th place. What was once a key indicator of COVID is now only seen in around one in five people testing positive. And according to our data, less than a third of people (29%) will ever experience a fever, which is also far less common than we’ve seen in the past.

Importantly, we found that only half of people with COVID had any of the classic three symptoms of fever, cough or loss of sense of smell, suggesting that the government’s guidance for PCR testing (which suggests that you should get a test if you have one of these three symptoms) is woefully outdated.

How bad is omicron?

This new variant is much more infectious than previous variants, causing a surge in cases across the UK and in other countries. And although it’s not yet clear whether we will be facing an overwhelming wave of hospitalisations from the disease, it’s important to remember that while omicron and delta may feel like a cold to many of us, they can still kill or cause long-term symptoms that disrupt daily life, especially for people who have not been vaccinated or are immunocompromised.

So far, we’ve seen the majority of cases in younger people, but we’re also now seeing cases rising in older age groups while the overall infection rate remains so high. The recent rise in positive cases in the over-75s is worrying, but we’re hopeful that the high levels of vaccination in the UK in older and more vulnerable groups will continue to translate to milder symptoms and few hospitalisations. The major problem with omicron is more the wave of sickness absence it’s causing in key health staff.

Get TODAY IN COVID in your inbox every day to better understand what happens next with the pandemic.

Is it omicron or a cold?

As we head further into the depths of winter here in the UK there are some pretty nasty colds going around, as well as the perennial flu. The ZOE COVID Study app data tells us the symptoms caused by the current COVID variants are very similar to those of a regular cold. This means that it’s not possible to know for sure what you’ve got based on symptoms alone. When the rate of COVID is high, a new sore throat, runny nose or unusual fatigue should be treated as COVID until you’ve been tested.

Because contributors to the ZOE COVID Study app log any daily symptoms they’re experiencing, as well as any COVID test results, we’re also able to track the prevalence of non-COVID colds. Just three months ago, around one in 12 people with new respiratory symptoms tested positive for COVID. However, with omicron around 50% of “new colds” currently are, in fact, COVID.

So if you or a family member are feeling unwell, there’s a good chance that it could be COVID, especially if you’re sniffling and sneezing a lot. You should stay home and get tested to be sure. Bear in mind that although lateral flow tests are good, especially if you swab both your throat and nose, they are less sensitive than PCR tests. When you do one, try and repeat it in the following days, as a single negative lateral flow result isn’t a guarantee that you aren’t infected.

Finally, regardless of the government guidelines, whether you have COVID or not, it’s best to stay at home if you’re feeling ill with strange or cold-like symptoms, and to avoid contacts and wear a mask if you do go out, to avoid spreading your germs to others who may be more vulnerable.

How to make sense of the UK’s new testing rules.

End of global COVID-19 pandemic in sight — WHO chief

Long COVID: Why it’s so hard to tell how many people get it

Many people are still shielding from COVID – and their mental health is getting worse.

Our current COVID vaccines could soon be updated to target new variants.