Instead of wasting more money on failed immigration policies, on hurting and othering people, the UK Government could use it to help people struggling in this country.

Today’s report by Together With Refugees on the increased costs created by the Nationality And Borders Bill is important in a number of different ways. Mainly though because it undermines one of the key arguments used for tougher legislation.

It is not enough, as I and others often do, to just tell people that refugee rights should be respected, or talk about international law and human rights. If you are struggling to feed your family or put a roof over your head these arguments aren’t exactly your main concern.

If someone is struggling and perceives that taxpayer money is going towards paying for people coming from abroad then it is understandable why some may latch onto the arguments that we should be helping here first.

It has never been an “either/or” situation though.

The current costs of immigration enforcement already run into the hundreds of millions. The vast majority of those costs aren’t on accommodation or benefits. They are on detention, deterrence and deportation. Costs which could easily be avoided.

If you just take the cost of deportation flights alone you are talking about millions of pounds. If the Borders Bill is implemented, and the government achieves its objectives, those costs can only increase.

The figures in the report aren’t plucked out of thin air. For example, we already see how much offshoring costs from looking at Australia, and for the UK it inevitably will cost more due to where asylum seekers may end up being offshored. 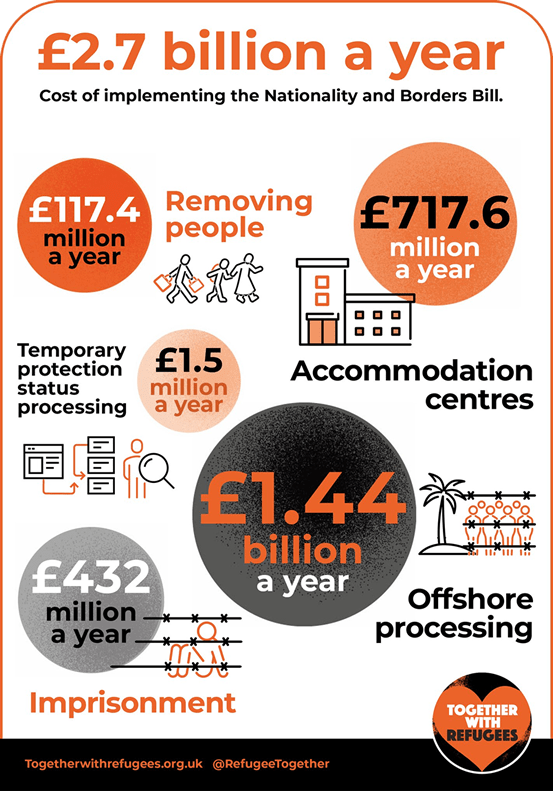 It is also telling that, despite claiming that the #AntiRefugeeBill – as it is known by some – will cut costs to taxpayers the government has not released its figures on it. Something which, when pushing such a significant piece of legislation, should automatically send up a red flag.

That extra £2.7 billion estimated in the report, on top of existing costs, which the Home Office itself claims exceed £1 billion, is a double whammy. Not only does it mean increased taxation, but it is also money which could be used to help people here.

Imagine for a second if, instead of continuing to waste billions of pounds a year on policies which have been proven to fail, we invested it in helping develop local communities so that it benefitted everyone, helped with costs of living, homelessness, etc.

Detractors will immediately claim that this could create what is termed as a “pull factor”. The reality is that the two main such factors for people coming to the UK are language and family ties, neither of which change by throwing more money at border policies.

The UK has, despite claims to the contrary, never really been a prime destination for people seeking asylum. Overall, numbers seeking safety here are relatively low. Even the Home Office has been unable to publish any evidence to support its claims.

Asylum “benefits” are more generous in countries such as France, Germany et al, so the “asylum shopping” line has never particularly held any water, but people who have lost everything do feel safer where they speak the language and know people, and that won’t change.

If instead of wasting yet more money on failed policies, we used it to help people who are struggling here, and develop communities in parallel, then we could help both asylum seekers and those in need now.

As I said, it isn’t an “either/or” situation.