EU as a Line of Defense for Ukraine?

Can the EU be a line of defense for Ukraine or other countries such as Georgia and Moldova in a potential territorial conflict with Russia?

After Ukraine formally applied for membership in the European Union on February 28, Georgia and Moldova followed suit on Thursday. Like Ukraine, both countries have a history of Soviet occupation and host contested regions on their borders where Russian-backed rebel groups have been fighting against their armed forces and have even formed breakaway republics.

Especially after the invasion of Ukraine, both countries are feeling the threat of Russian expansionism even more acutely.

But can the EU be a line of defense for Ukraine or other countries in a potential territorial conflict with Russia? A survey by the European Council on Foreign Relations in seven EU countries in January 2022 shows that citizens of these countries did see the EU in a position of responsibility given the then hypothetical invasion of Ukraine by Russia.

Responses indicating the EU should defend Ukraine were almost as numerous as responses mentioning NATO as a defender of Ukraine. While a NATO involvement (or a NATO membership of Ukraine) is very unlikely given the major implication of nuclear power and NATO member the United States entering into the war with Russia, the ways the EU can assist in the defense of Ukraine are actually more varied even if they stop short of immediate membership of Ukraine – or other countries potentially at risk for that matter. 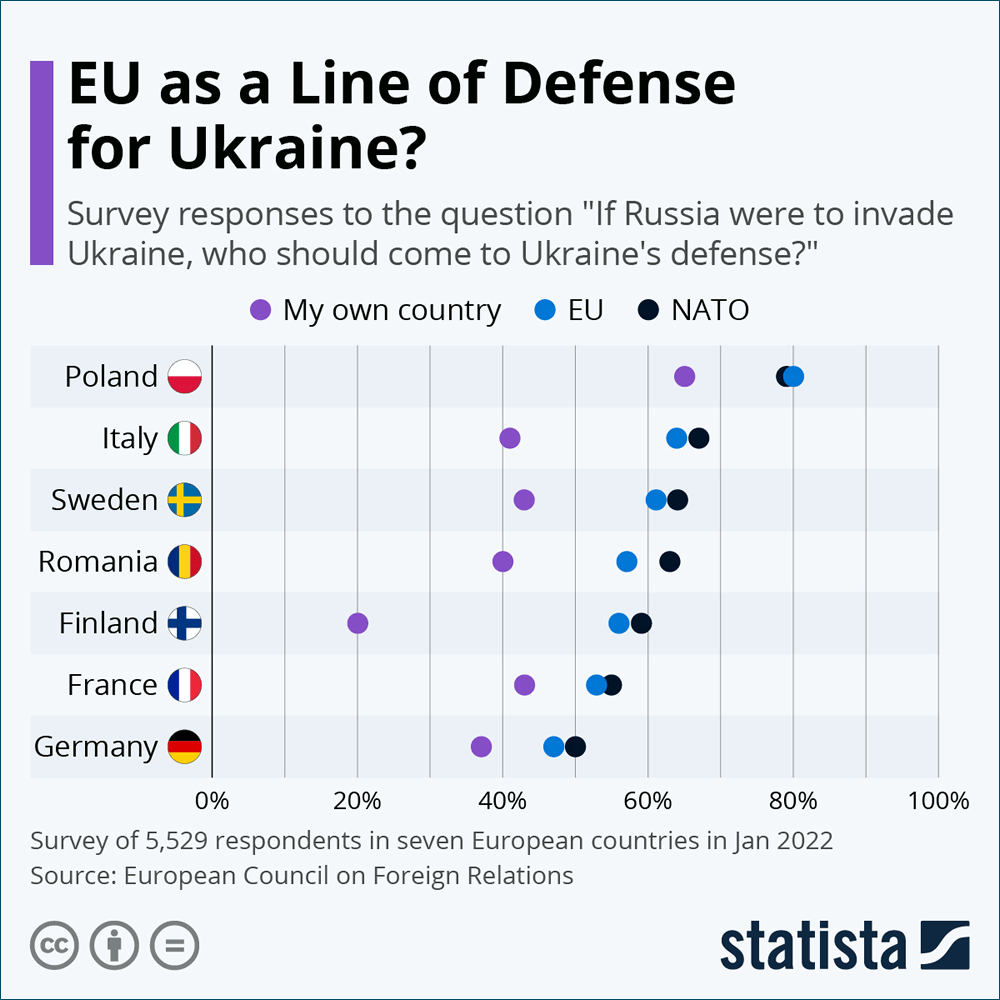 This chart shows survey responses to the question “If Russia were to invade Ukraine, who should come to Ukraine’s defense?” from seven EU member countries (as of Jan 2022). | Statista

The EU member states have already coordinated with each other to send military equipment to Ukraine, while also showing a uniform front on sanctions, refugee admissions and other aspects of the conflict. An oil embargo could be the next coordinated step taken by the EU.

The EU is unlikely to issue any military mandates on Ukraine, but in the current situation – where neither NATO nor any individual non-NATO, non-nuclear power is able to enter the war against nuclear power Russia – this does not necessarily disadvantage the EU as a party trying to influence this war. NATO, like the EU, has been coordinating among members to send weapons to Ukraine, for example from France, while also supplying intelligence, but as its primary objective is the defense of its member states, it is actually able to do less in the current scenario.

The involvement through intranational bodies that they are members of was more popular among EU respondents of the ECFR survey. Defense of Ukraine as a task of one’s own country was much less highly rated, especially in Finland and Germany.

NATO involvement in the defense of Ukraine was the highest almost across the board, closely followed by defense through the EU.

More articles in War in Ukraine

Putin’s mobilisation speech: what he said and what he meant

Survey shows British people, and especially Tory voters, feel very differently about some refugees than others.