Abortion. Complicated? Or not?

The U.S. Supreme Court throwing out the precedent-setting Roe v. Wade ruling draws strong feelings on both sides of the issue.

The U.S. Supreme Court throwing out the precedent-setting Roe v. Wade ruling obviously draws strong feelings on both sides of the issue. Some say is a complicated issue.

Many of us grew up believing that the Court would never take away a right it had in the past “given” to the American people or ruled constitutional. And, if abortion has a moral aspect to it, I always viewed that as a religious aspect, and the Constitution grants us freedom of religion. Or to believe in nothing if you choose.

All the talk about Roe being decided badly by prior courts is balderdash.

Subsequent courts reaffirmed the decision which was, by the way, a ruling made nearly 50 years ago by a court majority comprised of seven votes, five of whom were nominated by Republican presidents.

Ironic, in a sense, that last week’s decision to toss out that precedent was made by five justices nominated by Republican presidents. Interesting looking at life through America’s 2022 political lens and how different the Republican Party is from itself 50 years ago, or even 15 years ago.

The decision also demonstrates that America, which is a democracy – majority rules – now is governed almost completely by a minority:

Sens. Manchin and “moderate” Republican Susan Collins of Maine have said they were “misled” by nominees for the court who strongly implied, and some would say outright said, they were not the types to overthrow precedent or Roe.

But those Justices were exactly that type when judgement day came.

Did they lie when they testified to Congress? Many nominees in their confirmation hearings hedge the truth, by a lot. Now, nominees’ answers are “nuanced,” to say the least.

If Collins and/or Manchin, or others, think the nominees lied in their Congressional hearings, they should file articles of impeachment against the justice(s) rather than whine they were “misled.” This is much too big a deal to whine and not investigate your options.

Justice Clarence Thomas, key to the decision we got, said that there are other rights we have under the Constitution and Court rulings that should be reviewed. Like same-sex marriage. Like access to contraceptives. Like same-sex relationships.

Republican colleagues of his went out of their way to say this decision did not presage overturning other “rights.” Um-hmm.

One precedent Thomas neglected to mention is Loving v. Virginia which holds that the Court ruled laws banning interracial marriage violate the Equal Protection and Due Process clauses. Thomas is in an interracial marriage. He is married to Ginny Thomas whose role in former President Trump’s coup attempt is still being investigated. Think he’ll upend his marriage by ruling it unconstitutional?

Curious, too, that Thomas rarely spoke in Court hearings and never asked questions. Until he was in the majority. Now you can’t shut him up.

Most importantly, different religions treat abortion in different ways. The Constitution – in its original wording (no interpretation required) gives us all freedom of religion. Some religions believe abortion is wrong and contrary to the teachings of their religion. They clearly are among the minority that wanted Roe overthrown.

Other religions, though, don’t teach that.

For example, the Jewish Talmud, the text most central to Jewish law, states that a fetus is “mere water” and is not granted personhood until birth.

That belief doesn’t hold that everyone must adhere to it. Clearly other religions’ beliefs must be respected. But the Jewish belief, too, must be respected as much as those religions that ban abortion in the free America we know and love(d).

If we are to have freedom of religion, then the choice in abortion is the right American law:

Choose it if you want. Don’t choose if you don’t.

Overall, not really that complicated. 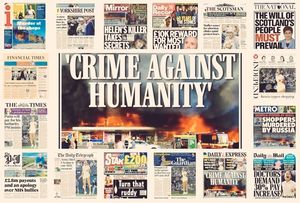