Government could be forced to come clean over VIP Test and Trace contracts.

It looks likely the Government will be forced to come clean over companies handed VIP Test and Trace contracts.

For more than a year, Good Law Project has been working to uncover the politically-connected firms that benefitted from the Government’s £37 billion Test and Trace programme.

We know that 50 companies with close links to Ministers, Peers and Government officials were given access to a priority route through which they secured lucrative COVID testing contracts. But, shockingly, the Government has refused to come clean over which firms profited.

Now, following our long Freedom of Information battle, the UK Health Security Agency (UKHSA), which took over responsibility for the testing regime, has finally confirmed that it is making contact with the 50 ‘VIP’ firms in order to answer our request.

We’ve gone back to UKHSA, calling on them to publish both the names of companies who received priority treatment and the names of those who referred them.

We expect to hear back by 5 July and will publish their response, along with, we hope, the names of the 50 further VIPs.

“These claims are completely false – there was no high priority lane for testing suppliers,” the Government’s spokesperson said. “All offers of testing went through the same robust assurance checks and there was no separate ‘fast track’ process.”

But Government emails made a mockery of this denial, proving the existence of a “fast track” for closely connected firms, with one stating:

📧
“If [offers] come from a minister/private office then please put FASTTRACK at the beginning of the subject line.”

Another email showed correspondence in which a private email address, as opposed to an official Department for Health and Social Care (DHSC) one, was used to discuss a potential deal.

According to David Conn, writing in the Guardian, “internal emails between DHSC civil servants, discussing the Rapid Testing Consortium (RTC), a group of companies led by York-based Abingdon Health, which was awarded huge government contracts without a competitive tender, did describe the process as ‘the VIP route’.”

The release of the names of the firms who landed these lucrative VIP deals would mark a significant step towards victory for all those who want to see the Government held to account for the vast sums of money spent on Test and Trace.

It comes hot on the heels of our successful challenge to the Government’s preferential treatment for VIPs when granting PPE contracts. In January, the High Court ruled that its operation of a VIP lane for handing out lucrative PPE deals for politically-connected companies was unlawful. 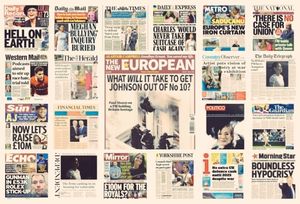