Scottish independence: What has changed since the last referendum.

If the UK continues down paths that further isolate it from the EU and the wider world stage, Scottish attitudes to the Union may harden. Especially because Boris Johnson is personally very unpopular in Scotland.

If the SNP Scottish government and Nicola Sturgeon, first minister, get their way, then in October 2023 voters in Scotland will again be asked “Should Scotland be an independent country?”. This will be the same wording used in September 2014 for the first independence referendum. This, on a massive turnout of 84.6%, saw 55.3% of voters against and 44.7% voting for independence.

As in 2014, the proposed referendum would be consultative, not binding. If supported, it would be a start to negotiations on Scottish independence between the Scottish parliament and the UK parliament (which would, constitutionally speaking, still have to approve Scotland’s departure). The referendum question will be the same, but politically, much has changed in nine years when it comes to support for Scottish independence, not least the UK’s own Brexit referendum.

To hold the first “indyref”, Westminster granted Holyrood a section 30 order. This mechanism allows for the temporary transfer of power, so the Scottish parliament can deal with issues that are normally dealt with at the UK level, such as constitutional questions.

However, since then, two UK prime ministers, Theresa May and Boris Johnson, have consistently refused to grant a section 30 order for the purposes of indyref2, arguing in both 2017 and 2019 that “now is not the time”. Sturgeon has again written to Johnson asking for that authority, but it is unlikely the prime minister will change his mind.

Sturgeon, very aware that “no” was likely to be the answer again to her section 30 request, has preempted that decision by directly asking the Lord Advocate, Scotland’s top law officer, to refer the proposed Scottish referendum bill to the UK Supreme Court. Very few people saw that move coming, and it plays well in terms of putting the Scottish government slightly more in the driving seat, legally speaking. The SNP government’s plan A was always to ask for a section 30 order. This is their amended plan B, which was to move ahead with a referendum anyway, subject to legal arguments they would no doubt face.

Sturgeon has now also announced a plan C. If no referendum is allowed, the SNP will fight the next UK general election on the lone issue of independence for Scotland.

We must never forget that few expected the 2014 result to be almost 45% in favour. The pro-independence movement gained a lot of ground during the referendum campaign – ground it has not lost since. The SNP has become the dominant force at Holyrood in every subsequent Scottish election. The 2021 Scottish Parliament elections saw another SNP victory, and a pro-independence majority, when you include the Green Party.

The 2014 referendum did not hurt the SNP – in fact, it helped the party a lot. It has seemingly changed the nature of voting behaviour in Scotland. The Scottish Labour Party, long dominant in Scotland, was devastated at the 2015 UK election. The SNP won 56 seats out of 59, leaving Labour, the Scottish Conservatives, and the Scottish Liberal Democrats with only one each. While the pattern for UK elections in Scotland has shifted somewhat, in 2019 the SNP won 45% of the vote and the lion’s share of the seats again. Sturgeon claimed a fresh mandate for an independence referendum then.

Brexit has also changed the playing field. In 2016, the UK voted, by 51.89% to 48.11% to leave the EU. Scotland, on the other hand, voted 62% to 38% to remain. Scotland, the SNP and others argued, was being “dragged out” of Europe against its will. The links between Europe and Scotland have always seemed strong, and the attitude towards the EU, especially the political attitudes, more positive. The SNP has always argued that Brexit represents significant constitutional change for the UK, and is therefore a reason to hold another referendum. But the UK government and Boris Johnson have insisted the 2014 result must stand.

Then, there was the COVID pandemic. While this caused social, political and economic ructions that few saw coming, it also illustrated the fact that Scotland had its own parliament, its own first minister, and could make its own rules, with different priorities and message. Irrespective of any difference in outcomes, Scotland’s ability to govern itself was more evident than ever before.

Polls over the last few years have occasionally shown a potential pro-independence majority in Scotland, albeit a slim one. Furthermore, the pro-UK union parties in Scotland (Scottish Labour, the Scottish Conservatives and the Scottish Liberal Democrats) are not as united as they were last time. It would be politically very difficult for them to run a united campaign as they did in 2014.

Indyref2 may have a better chance of success than 2014’s referendum, but a year is a long time. What may change in that year? The legal decision around the referendum and the potential granting of a Section 30 order will no doubt have impacts.

If the UK continues down paths that further isolate it from the EU and the wider world stage, Scottish attitudes to the Union may harden. But, Boris Johnson is personally very unpopular in Scotland. If he is replaced as PM before a referendum takes place, this might change the game and positively impact pro-UK Union attitudes in Scotland.

New Met Police legal action will get to the truth about the PM’s Partygate. 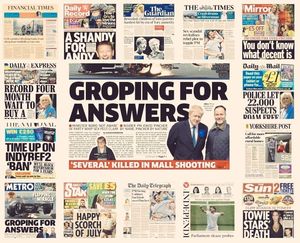