As the two words “I resign” have not crossed his lips and he is carrying on as though nothing had happened in a very disturbing way... Has Boris Johnson actually resigned?

If you are one of those Tory apologists on social media who thinks that Johnson’s non-resignation speech was ‘dignified’ you can get in the bin. Johnson’s resignation speech was not dignified and it wasn’t even a resignation speech, because the bloviating abandoned mattress with clown hair didn’t actually resign. He is still Prime Minister and the words “I resign” did not cross his lying lips. All he conceded was that the chair of the 1922 Committee should start the process of electing a new leader of the Conservative party, Johnson intends to remain in office until then.

In his petulant speech Johnson blamed a ‘herd mentality’, he blamed the media, he blamed everyone except himself for the predicament he now finds himself in. There was absolutely no recognition that it’s his own lies and deceit which have brought him down. Even at this late stage, there is no sign of any contrition or that he has learned anything at all. His speech dripped with entitlement and self-pity.

Despite this supposed resignation, Johnson is still offering cabinet posts, he’s still re-shuffling, and he chaired a Cabinet meeting this afternoon. Johnson is still effectively running the country. So in what meaningful sense has he resigned? Surely, it is the job of the Deputy Prime Minister to step in. But Johnson is carrying on as though nothing has happened in a Trumpian denial that the game is up.

This is an alarming and dangerous development. Saying that Johnson is a caretaker Prime Minister is a sick joke. When has Johnson ever taken care of anything other than his own self-interest and selfish ambition? The longer he is allowed to remain in power the more time he has to use every dirty and underhand trick at his disposal to maintain his stranglehold on power, choking off what little oxygen remains for democracy and accountability in British politics. Johnson cannot be trusted.

For the sake of what remains of democracy in the UK, Borexit means Borexit. It’s time to get Borexit done.

Starmer is threatening a vote of no confidence in Johnson in the Commons in an effort to get him out if the Conservatives don’t do so immediately and if Johnson tries to stay in post until the Conservatives get around to electing a new party leader.

Funny isn’t it, Tory Ministers are allowed to change their minds, a mere four weeks after the last vote of no confidence in Johnson, but neither the Conservatives nor Labour think that Scottish electorate should be allowed to change their minds on Scottish Independence after eight years in which everything has changed. Where’s their cries of “They had a vote, they should accept the result.” now?

If the Commons was to vote no confidence in Johnson, it would then be for the Queen to appoint the person best-placed to command a majority in the Commons as Prime Minister. In the event that no such person could be appointed, Parliament would be dissolved and a general election held.

The events of Johnson’s time in office have illustrated just how fragile democracy in the UK really is. The apologists for British nationalism have always patted themselves on the back about the supposed better quality and higher standards of democracy under the Westminster system. Indeed during the 2014 referendum campaign we were told that democracy in Scotland depended upon Westminster, and that left to our own devices Scots would rapidly deteriorate into a corrupt authoritarianism and the destruction of meaningful democracy. But that is precisely what has been happening with this Conservative party. Under the Westminster system, democracy and political accountability depend upon those who hold high office acting with honour, decency, and propriety, but when power is seized by liars, charlatans and cheats, as it has been with this Conservative party, the Westminster system is rendered powerless.

Johnson wanted to be in office for three terms, he fancied himself as the Churchill of the 21st century. But today Johnson instead ties with Neville Chamberlain for the number of days in No 10. Theresa May and Jim Callaghan both served longer. Johnson will go down in the history books as one of the worst Prime Ministers that the UK has ever had. The man that destroyed the conventions, customs and traditions that underpin the famously unwritten British constitution. And in addition, he destroyed the traditional foundations of unionism in Scotland. This so-called union is now no longer a partnership of nations founded on consent. Johnson has disabused us of that notion in a blatant denial of democracy that has been enthusiastically adopted by Keir Starmer’s Labour party.

Whoever eventually takes over from Johnson will be a creature in his image. It will be a Conservative minister who has spent the past months and years colluding with and enabling Johnson’s assault on standards of decency in public office. There are many names of potential candidates being bandied about. One of the reasons Johnson has clung on so long is because the Tories have no clear successor in sight. In no small measure that’s because Johnson promoted talentless non-entities like Alister Jack or Nadine Dorries whose sole political usefulness was their willingness to keep defending Johnson no matter how egregiously he broke the rules.

One thing is certain, however, Johnson’s successor will be a creature in his own authoritarian sleazy, and deceitful image. It is being reported that Rishi Sunak has already set up a temporary leadership campaign office in a Westminster hotel. It’s bound to be a swanky hotel.

The only reason that Johnson is being forced from the Conservative leadership now is not in order to protect and defend the highest standards in public office. It is to ensure that the Conservatives maintain their corrupt grasp on power. Nothing is going to change even when Johnson is finally dragged kicking and screaming out of number ten. This is all happening so that things can stay the same and so that the Conservatives can win the next UK General Election and the Tories can continue to trash democracy, accountability, and honesty and decency in public office for years and years to come.

There’s only one way in which Scotland can be certain that we can get Borexit done and that we will not be subject to Johnson’s democracy denying Conservative heirs, and that is through independence. It’s time.

Boris Johnson: Four key insights from recent polls can help us see where the crisis is heading. 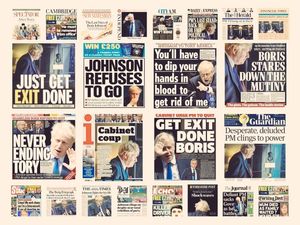