What Boris Johnson said in his bitter resignation speech and what he really meant.

Boris Johnson breaks from his party in a bitter resignation speech in which there is no sense of taking responsibility and no sense of apology.

Having apparently delayed the inevitable for as long as he could, Boris Johnson finally took to a podium outside 10 Downing Street on July 7 to say he would be stepping down as leader of the Conservative Party. This ultimately means his time as prime minister is over too.

This followed a torrid few days during which many of his MPs turned on him by either calling on him to resign or resigning themselves from government jobs. Johnson said he would stay in post as prime minister until the governing Conservatives had elected a replacement.

Resignation, defeat and concession speeches in politics are difficult to make. Johnson, like so many departing leaders before him, wanted to shore up his reputation while also taking aim at his enemies and those who brought him down. This is always a tricky line to walk. Too much attack and you are the sore loser, too much self-praise and you are deluded.

Did he manage to walk the line? Not really. The speech was followed by objections over its tone and led to calls for him to depart straight away rather than staying on until his successor is appointed.

Here are a few things we learned from Boris Johnson’s resignation speech.

1. He still doesn’t believe he should go

The build-up to Johnson’s eventual resignation involved a stand-off with his own ministers and a protracted refusal to quit. Even though Johnson has now agreed to leave, it was abundantly clear from his speech that this is a man who struggles to accept what has happened to him.

“Victim of his party’s senseless antics”

His choice of words was telling. Johnson revealed that he had argued to his cabinet that a change of government at this current moment would be “eccentric” given the country’s needs. He accused his own parliamentary party of acting under a “herd instinct” and referred to a “Darwinian” method of leadership selection. He, it seems, was the victim of his party’s senseless antics.

“Them’s the breaks” he concluded – a phrase used when something happens outside your control.

2. He’s lost what interest he had in his party

Johnson has pressured his ministers into agreeing to let him stay on as a caretaker prime minister until a new leader is in place. But the tone of his speech has already triggered their regret at making such a concession. Conservative Party grandees have weighed in, with former prime minister John Major arguing that months with Johnson as PM would be “unwise”.

It is usual in these types of speeches to pledge support for a successor. Johnson’s version of this tradition was lukewarm at best:

💬
“Our brilliant and Darwinian system will produce another leader equally committed to taking this country forward through tough times … And to that new leader, whoever he or she may be, I say: I will give you as much support as I can.”

It is often said that he is not as rooted in the Conservative party as many of his fellow MPs – and this speech left it hard to imagine him staying on as a backbencher after he finally leaves Downing Street. Before becoming prime minister he had seen no problem in rocking the boat. Those Conservatives aching for a period of calm will be worried about letting Johnson continue in Downing street when he no longer has a stake in future elections.

3. He remembers the highs and has already forgotten the lows

The broader style of Johnson’s speech was also unusual. The rhetorical devices he deployed are common in politics, but perhaps less so in resignation statements specifically. Groupings of three ideas are popular in political speeches, for example. Johnson said he “felt it was my job, my duty, my obligation” to stay on in the role of prime minister.

Lists using very active language are also popular and Johnson opted for this style to remind us of his achievements:

💬
“Getting Brexit done and settling our relations with the continent after half a century, reclaiming the power for this country to make its own laws in parliament, getting us all through the pandemic, delivering the fastest vaccine rollout in Europe … leading the west in standing up to Putin’s aggression in Ukraine.”

These devices are standard in campaign-type speaking, or in speeches at party conferences or conventions. But the boosterism sounded odd in a speech effectively marking a huge (personal) defeat. Anyone without background knowledge who tuned in for this speech could have been forgiven for wondering why on earth he was resigning.

Perhaps the most significant words were those missing from Johnson’s speech – “thanks” and “sorry”.

It’s normal in a speech like this to thank your colleagues, even if things ended badly. There were thanks for the public, Johnson’s family and the civil service but none for any ministers or MPs. Where, I wondered, were the thanks for those ministerial colleagues who had been defending him in parliament and in the media for several months? Many had of course ended up advising him to quit but it is quite a snub to not rate a mention.

“Little to gain by saying sorry”

It is fair to say that the speech elicited an immediate backlash. Critics pointed out that there was no sense of taking responsibility and no sense of apology. This is not part of Johnson’s DNA and while using apologetic language in the House of Commons has sometimes been necessary in recent times, he probably felt he had little to gain by saying sorry at this final moment. 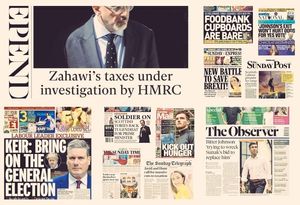