Survey shows British people, and especially Tory voters, feel very differently about some refugees than others.

A heartening 70% of British voters want to allow Ukrainians into the UK but only 50% feel the same way about Afghans. And the difference is even starker among those who vote Conservative.

As of late May, in the three months since Russia invaded Ukraine, 6.8 million refugees had fled the war into other countries. The majority, some 3.6 million people, headed to Poland, while another million went to Romania. European Union nations and others began offering visa waivers and other schemes to help Ukrainians. The UK, for example, is currently home to about 60,000 refugees from Ukraine.

Further east of Europe, the people of Afghanistan are experiencing conflict which has lasted for over 40 years. More than 2.6 million Afghan refugees are registered with the UN’s refugee agency alone, with an increasing number of people fleeing the country in the wake of the Taliban takeover.

Do people think that refugees from one of these two countries deserve more help than the other? Are people’s views mirroring the racist double standards that characterised much of the coverage of conflicts in Ukraine and the Middle East? We set out to find out what the British public believes. Caught between their desire to show solidarity for people affected by war and their evergreen concerns that too many people are coming to the UK, legally or illegally, we wanted to know how recent events have shaped their views.

To do this, we conducted an online survey, as part of ongoing research, with a representative sample of 1,690 adults in Great Britain contacted via YouGov. Among other questions, we asked respondents:

“Do you agree or disagree that we should let refugees fleeing conflict-affected areas come and stay in the UK?”

To get to the core of the matter, however, we actually deployed three slightly different versions of this question, with each respondent only seeing one. In one version, we asked the question as it is, in one further version, we added a reference to Ukraine as the conflict-afflicted area, and in a third version, Afghanistan was used as the example.

For people receiving the neutral version of the question, levels of support for helping refugees were high, with 71% agreeing that the refugees should be allowed to come and stay in the UK. We found similar levels of agreement when we ask about Ukrainian refugees, with 70% of respondents agreeing we should help.

However, in the version where we ask about Afghan refugees, the proportion of respondents agreeing that we should help dropped by a staggering 21% to 50%. The difference is statistically significant and shows a specific, rather than universal, feeling of responsibility among the UK public.

We investigated this interesting gap by comparing the responses we got from a series of political and demographic groups. The gap between support for helping refugees from Ukraine and Afghanistan is at its largest for those respondents who voted Conservative at the last general election. Of all Conservative voters, 67% thought we should let refugees come and stay in the UK, compared with 65% when we used the Ukraine frame, and only 36% with the Afghanistan frame.

This is not to say we didn’t find a gap with Labour voters, but it was much smaller. In this group, 81% said that the UK should let refugees come and stay, compared to 82% for those who received the Ukraine question, and 76% with the Afghanistan frame.

Overall, there is a 21% gap for the general population, which grows to 31% for Conservative voters, and shrinks to 5% for Labour voters.

The smallest gap is observed among young respondents aged 18 to 24. In this group, 58% thought we should help when asked with the neutral frame, 60% with the Ukraine frame, and 59% with the Afghanistan frame. So, while the gap is almost gone, support levels for helping refugees, in general, were also lower than for older groups in our sample.

For all those optimist proponents of a reawakening public spirit favouring international cooperation and solidarity in the face of conflicts, pandemics or perhaps even climate change, these results are a reminder that there are limits beyond surface shifts in the public mood.

The war in Ukraine has clearly prompted British people to think about their role in helping those who suffer and to build a fairer world. But charities, NGOs, and governments, through their efforts, are apparently still not able to bridge the gap in the public’s mind between the specific case of Ukraine and the broader cause of helping all those afflicted by conflicts worldwide.

To better understand what is driving the sense of exceptionalism regarding Ukraine, we might look to the higher levels of media attention that are currently being given to the crisis there. Another factor may be a perceived cultural or social nearness to Ukrainians (or, conversely, a sense of distance from or even racism towards Afghan refugees). It’s also possible that British people are more open to helping Ukrainians because their plight leaves them with a stronger sense that something similar could happen to them.

Thinking “it could be me” will move many to take action, but it won’t give us the chance to engender the radical change in our care for all people around the world. Once the emergency is over in Ukraine, the work to make the world a place without suffering will still go on.

How the hostile environment is affecting EU citizens. 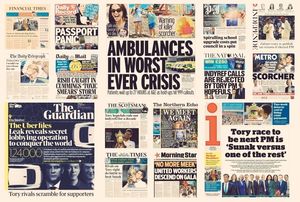