What happens – and when – in the race to replace Boris Johnson.

Conservative MPs vote in the first round and members in the second.

Boris Johnson’s resignation as Conservative leader has triggered the start of the process to find his successor. Rules setting out a two-month leadership election have now been confirmed by the 1922 Committee of backbench Tory MPs.

The Conservatives’ leadership selection system is a two-stage process. First, Tory MPs hold a series of ballots to whittle the field of candidates down to two. This usually takes one to two weeks, depending on the number of candidates. Second, the final two candidates are then offered to the party’s approximately 100,000-150,000 individual members, who make their choice in a postal ballot. A period of two to three months is usually allowed for this stage in order to enable candidates to campaign for support in regional leadership hustings and televised debates.

In order to ensure that only MPs with serious backing enter the contest, all candidates must be nominated by 20 Tory MPs (a proposer, a seconder and 18 others). The timetable is tight, with nominations opening and closing on Tuesday July 12.

Those candidates reaching the threshold are entitled to participate in the first ballot of Conservative MPs, and which takes place on Wednesday July 13. Voting in this and subsequent rounds is by secret ballot and each MP can vote for one candidate (which need not be the one they nominated and can change between rounds of voting).

Faced with an exceptionally large number of MPs hoping to stand in the election to replace Johnson, the 1922 Committee has tweaked the rules. Usually, one candidate at a time is eliminated in the parliamentary votes but the worry is that, with such a crowded field, the process would take too long. Changing the rules in this way is not unprecedented – a similar step was taken in the 2019 contest, when there were ten candidates.

This year, candidates must secure the support of at least 30 of the 358 Conservative MPs in the first round to proceed to the next round. Those who fall below the threshold are eliminated. The second ballot takes place on Thursday July 14 and this time only the bottom-ranked candidate is eliminated. If further ballots are required, they will be held the following week, with the bottom-ranked candidate eliminated each time.

The party hopes that the final two candidates will then be known and that the contest can move on to the mass membership stage by the time the House of Commons rises for its summer recess on July 21. Campaigning will take place throughout the summer and ballot papers sent to members in August. The final result will be announced on September 5.

Who could make it through?

The selection rules play an important role in shaping ideological competition in Conservative leadership contests. As candidates are eliminated in the parliamentary ballots, their supporters tend to shift to another from the same ideological bloc in the next round of voting. Since the parliamentary ballots choose two final candidates and not one, they can effectively become two concurrent sets of “primaries” for the major factions – centrists and the right. Each is effectively selecting their preferred candidate to offer to the membership.

Thus, in 2005 David Cameron and Kenneth Clarke fought for the support of centrist Tory MPs, while David Davis and Liam Fox contested the right-wing vote. In 2016, May scooped up Remainer-centrist MPs, while Leadsom and Gove fought for the Brexiter-right.

In 2022, Liz Truss, the foreign secretary, looks to be the major candidate appealing to the Tory right, offering hawkish stances on tax cuts, Brexit policy (the Northern Ireland Protocol) and culture war issues. Her principal challengers for this bloc of MPs are Suella Braverman, Kemi Badenoch and – if she runs – Priti Patel. Braverman and Patel lack support beyond the Brexiteer-right. Badenoch has made an early impact with an attack on identity politics, but she lacks Truss’s profile or experience. Truss looks a strong bet to reach the all-member ballot.

Liz Truss is in a strong position to win support from the right of the party. | Flickr/UK Government

The centrist vote is split between numerous candidates, of whom Rishi Sunak, the former chancellor, is the strongest. Centrist MPs adopt more dovish positions on the economy, Brexit and the culture war, although some candidates are toughening their positions, especially on tax cuts, to gain wider appeal.

Strategy for the factions

When the final parliamentary ballot of three contenders consists of one candidate from one major faction and two candidates from the opposing faction, the former is almost guaranteed a top-place finish. He or she may direct some supporters to vote tactically for the weaker of their two opponents to engineer an easier contest at the all-member stage. It is therefore advantageous for a candidate to be the sole representative of their faction in the final parliamentary round of voting.

When Cameron was the sole centrist facing two right-wingers in the final parliamentary ballot in 2005 it was rumoured that some of his backers voted for Davis, who they considered an easier opponent in the membership ballot than the more populist Fox. Similar rumours swirled in 2019, when it was alleged that some of Johnson’s supporters voted for Hunt in the final parliamentary ballot to ensure the elimination of the more dangerous Gove.

The party membership leans to the right, which ought to help a strong candidate from that wing – in this case, Truss. But party members consider other factors, such as experience and electability. Like Truss, Sunak has held one of the great offices of state. If polls showed him, or another centrist, as substantially more electorally appealing than Truss, that could boost him and undermine her. In short, there would be everything to play for. 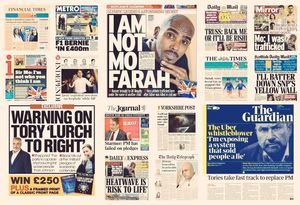