Days after ordinary Sri Lankans stormed the security barricades at their president’s official residence to force his resignation, the island nation of 22 million is holding its collective breath amid the worst economic crisis in its history.

Beleaguered president Gotabaya Rajapaksa, 73, fled by military plane to the Maldives overnight, throwing into disarray plans for his promised resignation which had been scheduled for yesterday.

The office of prime minister Ranil Wickremesinghe declared a state of emergency. Wickremesinghe, a veteran politician who was sworn into office just eight weeks ago had also said he would resign. But he has been appointed acting president by the fleeing president. Meanwhile, the main opposition leader, Sajith Premadasa, has said he will run for president as well as support an all-party government.

If all goes to plan, Sri Lanka’s 225-member parliament will vote on 20 July to elect a new president and end 20 years of the Rajapaksa political dynasty’s dominance.

“86% of Sri Lankans are having to skip meals”

The new administration will have to submit a debt restructuring plan to the International Monetary Fund (IMF) in August, in order to agree a bailout package for the worst economic crisis in 74 years of independence. Sri Lanka is bankrupt, without foreign currency to pay for fuel, food imports and fertiliser. The World Food Programme estimates that 86% of Sri Lankans are having to skip meals or take other measures to cope with the crisis.

Last Saturday, the British colonial-era presidential mansion was transformed into the people’s palace, with crowds ascending sweeping staircases, lolling on four-poster beds, strolling the manicured lawns and merrily splashing about in the swimming pool.

oD spoke to some protestors about their hopes and fears for their island home.

‘I was a part of the revolution’: Shanitha Fernando, president and co-founder of Authenticities Sri Lanka

“I live in Colombo in the very heart of the city, barely five kilometres from the presidential palace. I was at the protest with roughly 15 colleagues. I didn’t ask my employees to come to the protest, there were just many like-minded people and they came. We all went because we decided enough is enough. I heard that 54 trains came from other parts of the country into Colombo and people made the effort to come in any way they could, by lorry, on bicycle, on foot.

“The spirit was just amazing. It really captured the need of the hour. It was not a case of rich against the poor. It was not about one community or another. Everyone is feeling the pinch and everyone wanted to say enough is enough. The situation is so bad – there is no fuel, there is no cooking gas, there is no way to get to work, inflation is soaring. We want regime change.

“This has been coming since April, which is when I started going to protests. I was not a regular but I used to do my part. The president should have heeded the voice of the people. He didn’t and so there was the protest organised by the people – there were no leaders, no political party in charge. It was a kind of revolution, not a protest. I was a part of the revolution.

“I felt two emotions on 9 July. Sadness, because it was a very sad day for Sri Lanka. We shouldn’t have been in this mess. And I felt happiness because the people had an opportunity to release the pressures they felt at the mismanagement and corruption.

“If you analyse the politics of Sri Lanka, it was this regime that played one against the other – Sinhalese, Tamil, Muslim. On 9 July, we were one people. Let politics not come between us.”

“I was at the protest on 9 July because it was a Saturday and our foundation, which is a registered charity, doesn’t run community kitchens on the weekend. Five days a week, we run ten community kitchens in Colombo and urban centres all around and serve 1,500 meals a day, all cooked on firewood. So it’s hard work and we do it only on weekdays to give our teams time to rest. Our plan is to reach 2,000 meals a day until 31 August, when we hope the situation will be better.

“We were at the protest near the presidential palace. I didn’t go to the president’s residence but I went to the presidential secretariat and to Temple Trees [the prime minister’s official residence]. I went because like other people, I feel we need a country to live in and what we are facing right now is not because of us. I was present at that moment when the people took the step of peacefully overcoming the barriers. It was difficult because tear gas was being fired. It was a quite extraordinary moment. I didn’t expect that many people. I think there were 2.5 million people there, ordinary people, who pluck coconuts, catch fish, and work in different jobs. They kept going and suddenly the army backed up the protestors. They didn’t destroy anything, they just went in. I was at the protest from 10.30am to 6pm.

“We didn’t have anything to eat or drink, so eventually we left and walked the seven kilometres home. We feel that we have achieved our objectives to some extent. Now let’s see what happens.”

“I reached the protest at about 3.30pm. By that time, the major part of it was already done and there was a carnival atmosphere all around. I wasn’t there when they stormed the presidential palace but I did go to the presidential secretariat.

“This was the first time I had taken part in a protest in my 38 years. The middle class of Sri Lanka largely doesn’t get on to the roads to protest and join in demonstrations and so on. But now the impact of the situation is being felt by everybody and people wanted to raise their voice.

“For the old guard, say my parents’ generation and for people over 55, it is a little unsettling. They feel it’s all a bit unnerving. People over 50 are used to more structure. For the younger crowd, we feel more liberated, able to raise our voice.

“We feel that the system should not rely on a particular person or party and that you should have some qualifications, not just a voter base, if you want to be in parliament. People are saying that this is an opportune time to form an all-party government. 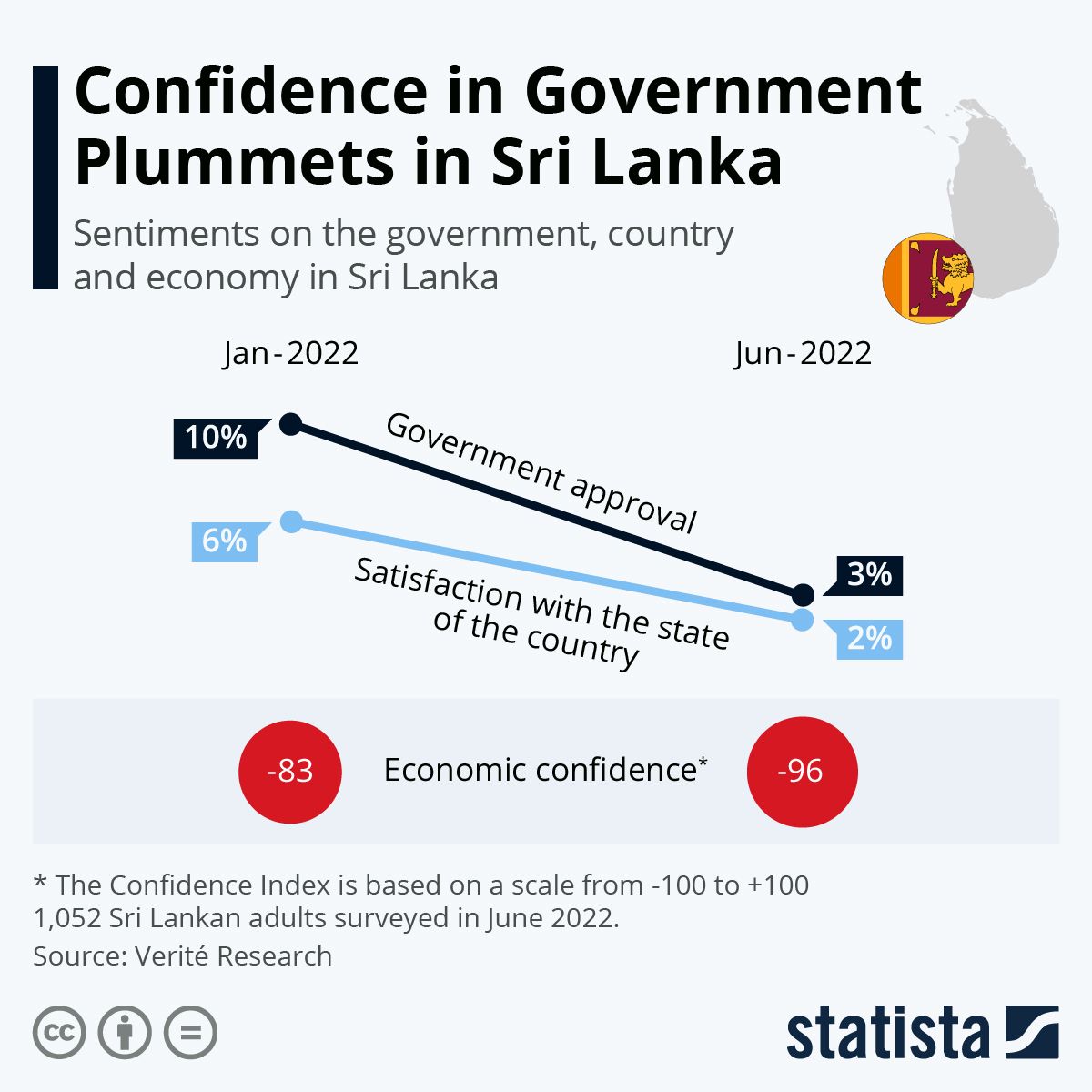 “Really, the protest felt almost like independence day [Sri Lanka won independence from Britain on 4 February 1948]. It was a chance for us all to come together, to be united.

“I am Sinhalese and when I was young we were told to look at the Tamils in a different way. But on 9 July, I saw Tamils joining in. We were all one people, there were no divisions between Tamils, Sinhalese, Muslims, the wealthy and not-so-wealthy. It felt surreal, I have never seen Sri Lanka like this before.

“The people have had a big win because the protests have, by and large, been really peaceful. Of course, there are some people who take the opportunity to misbehave, but largely it has been non-violent. The international media should report it as it is, life is going on. We even played a Test match against the Australians and won.

“Going forward, people want to see a plan with a purpose. We want accountability. I remember hearing on the radio, a story about the Indian prime minister Indira Gandhi coming to Sri Lanka and having no more than a glass of water at dinner with our prime minister, Mrs Bandaranaike. When she was asked why, she said there was a famine in India and how could she eat when her people were not eating. I don’t know if the story is true but I think we want to see some of the same spirit in our leaders.”

‘We showed them the people are stronger’: Resident* of Colombo, engineer

“I reached the presidential residence with all the other people and felt really happy that finally, we could show that we are the ones in charge, not these corrupt leaders.

“I spent the whole day at the residence and also went to the presidential secretariat. It was an eye-opener to see the menus at the secretariat. They were serving mashed potatoes and roast chicken to all these officials while the ordinary people were starving or making do with dal and a bit of roti.

“I was glad then that we had chased these so-called leaders out of these palaces. We managed to show them that the people are stronger than armies, security guards and high walls. They have stolen from us and brought us to this – our rich country is poor and can’t even feed itself.”

Boris Johnson’s claim of a ‘mandate’ from the people isn’t accurate.

Tory leadership hopefuls fail to address the reality that Brexit is a disaster.