What exactly was “Johnsonism” beyond a few slogans such as “levelling up” and the scandals that attracted the attention? Behind Boris Johnson’s buffoonish exterior, the quick wit and wearisome repartee, lay very little.

Following an excruciating few days when many of his colleagues left his cabinet over yet another scandal, Boris Johnson finally resigned on July 7 as leader of the Conservative party. As the UK is a parliamentary democracy, he continues as caretaker prime minister while the contest that will produce his replacement plays out. This situation has caused only more confusion and hiatus.

In a characteristic sorry-not-sorry speech, Johnson made clear that the problem was not him or his policies, but rather that his own party had decided to move in another direction. The “herd” had decided to find a new leader, leaving the PM colleagueless and friendless in front of No. 10.

Johnson’s departure will mark the end of yet another tumultuous, chaotic period of British politics. The question remains, however, how did one of the most successful politicians of recent years go from winning a huge electoral majority in 2019 to being forced into resigning less than three years later?

For some, the answer is obvious. Johnson attracted accusations of scandal, impropriety and incompetence in much the same way that Donald Trump attracts accusations of arrogance, misogyny and obnoxiousness. The justification for this view is obvious, given their personalities and past performances.

Granted, even the most cynical commentator would be hard-pressed to imagine the inventiveness of the ways in which Johnson offended everyday opinion. From a scandal over wallpaper, being fined by police for breaking his own lockdown rules and, finally, treating with indifference serious accusations of sexual misconduct against a member of his government, the charge sheet is long and novel, at least in British politics. Multiple quasi-apologies and half-hearted mea culpas have provided grist to the mill.

But if we privilege the role scandal plays in this story, then the implication might be that all was otherwise fine under Johnson’s administration. This is far from the case. What became obvious to his own party was that behind the buffoonish exterior, the quick wit and wearisome repartee, lay very little.

We’re used to political scientists discussing Thatcherism, Blairism, Reaganism and so forth. What exactly was “Johnsonism”? Beyond a few slogans such as “levelling up”, the answer is not much.

Johnson successfully reached out to some working-class sections of the population who wouldn’t usually vote Conservative by promising to “get Brexit done” but beyond this gesture in the direction of earthy nationalism, there was very little in his policy agenda for them. Anyone feeling increasingly under pressure with rising inflation or seeing their standard of living eroded would find little in the way of concrete initiatives to help them.

It soon became clear that Johnson could not maintain the allegiance of his newly recruited voters. Meanwhile, in wooing his new base, his neglect of the communities his party has counted on for decades cost him votes in other areas. The recent results from by-elections held in very different constituencies in England on the same day confirmed all this. A northern seat won by the Conservatives in 2019 returned to Labour and an ultra-safe seat in the south west was taken by the Liberal Democrats.

Even to the right, Johnson’s appeal and traction was very palpably on the wane. There was little assurance that the once robust defender of free-market economics, enterprise and low taxes would at some stage revert back to type. Having splurged hundreds of billions on COVID-related measures, Johnson seemed reluctant to contemplate how the bill was to be paid.

But isn’t this just a form of “big tent” or centrist politics of a kind associated with Emmanuel Macron in France or Angela Merkel in Germany? Wasn’t Johnson in seeking the broadest coalition of forces merely playing the game of contemporary electoral politics? Give something to everyone, and watch the votes roll in.

There is an ideological core to centrism which was absent in Johnson’s government. This wasn’t the “catch-all” politics found in continental Europe – built from the ground up with the backing of a cartel party. It was a single issue campaign around Brexit that lost traction and significance once that objective had been obtained – or had been seen to be obtained.

Politics under Johnson morphed into a campaign to keep Johnson in power. Politics served little purpose other than to keep the man famous for his childhood pronouncement that he wanted to be “World King” at the centre of attention.

In the end, his party woke up to the realities of this maverick, self-interested figure. They finally understood that they had created, in contemporary management speak, a “single point of failure”.

Johnson’s multiple failures, of character, of policies, of leadership had created one gigantic source of risk for all of them. They stood him up on the plank, marched him to the end at the point of many swords, and finally nudged him over into the depths. An ignominious end for an ignominious figure who presided over an ignominious period of British politics. 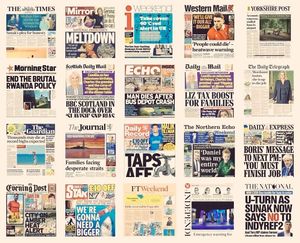