Rishi Sunak or Liz Truss? Polling shows party members want her – but the wider voting public would choose him.

Will Conservative Party members choose their preferred leader to become the new Prime Minister or the candidate who is more popular with the wider public?

Rishi Sunak and Liz Truss are the final two candidates chosen to go head-to-head in the battle to become the next leader of the Conservative party and, therefore, the next prime minister of the UK.

They emerged as the top two candidates in a series of ballots among Conservative MPs and so will spend the summer campaigning to win votes from members of the party, which according to the House of Commons Library amounted to 180,000 in 2019. The final winner will then be announced on September 5.

Many people think this is not a legitimate way to select the next prime minister even though they might accept that Conservative party members should be involved in selecting their next leader. However, precedence is in play here, since this is how it has been done in the past. Whatever the public might think of it, the system is not going to be changed before the new leader is in Downing Street.

A YouGov poll of Conservative party members published on July 21 showed that the members are very likely to support Liz Truss rather than Rishi Sunak in this contest – with 62% preferring her and 38% him.

A strategic dilemma for party members

This result creates a strategic dilemma for the party because Conservative voters beyond the party prefer Sunak to Truss. A poll of Conservative voters conducted by JL Partners for the Daily Telegraph published on July 16 showed that Sunak was in the lead. Some 60% of them thought Sunak would make a good prime minister and 11% thought he would be bad. The figures for Truss were 48% good and 32% bad. So among Conservative voters, Sunak is both more popular and less polarising than Truss.

This conclusion is reinforced by a poll from Opinium which asked respondents to identify who they thought did best in the leadership debate on ITV on July 17, when five candidates were still in the running. Sunak came second of the five with 24% of the vote. Truss came last with 7%.

Why are the members different?

A YouGov membership survey from July 19 gives some insight into why the members differ from Conservative voters. Respondents were asked what they wanted from a new leader and many of them focused on “personality traits” in their priorities. Within this theme, honesty and integrity trumped all other traits, but they also want someone who has “strong personal character”. “Intellectual strength” and “communication skills” were ranked as less important than these traits. 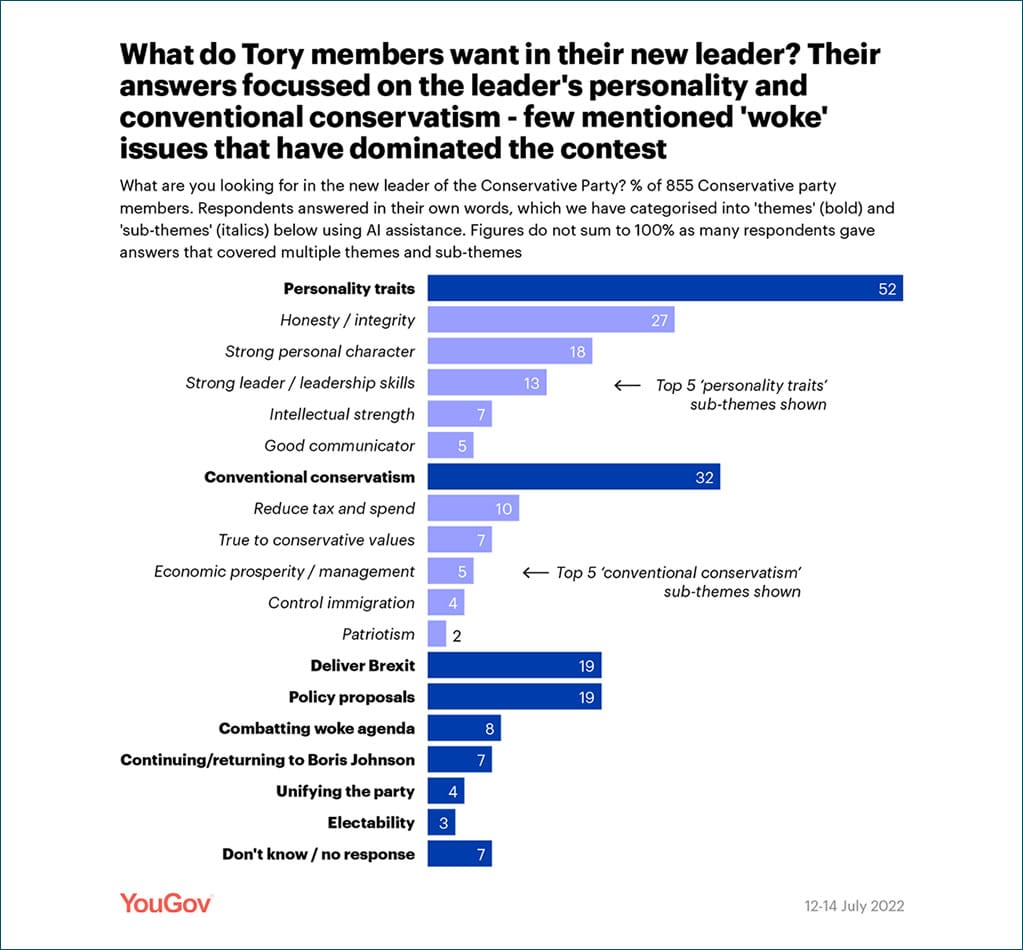 The other top priority was the need for “conventional conservativism” in the next leader. Drilling down into what that means in practice, the members want a leader who will “cut taxes and spending” and “control immigration”.

In contrast, for voters, the cost-of-living crisis dominates the picture.

The prominence of honesty is a clear reaction to Boris Johnson but it’s not necessarily clear which of the two candidates would be rated as more or less honest than the other.

However, the same cannot be said about “strength”. Truss, still the foreign secretary in Johnson’s caretaker government, has been trying to emulate Margaret Thatcher by leading the charge against Russian aggression in Ukraine.

Truss is also promising large-scale tax cuts as soon as she enters 10 Downing Street. Sunak’s refusal to cut taxes immediately if he wins the election clearly works against him among the members. Her advantage in this respect is probably reinforced by the fact that party members said in the survey that they prioritise “tax and spending cuts” over “effective economic management”.

A bumpy start awaits the victor

Once the winner is decided they will have to take urgent action to deal with the cost of living crisis. Unfunded tax cuts will very likely prolong high rates of inflation and the Bank of England will respond by raising interest rates and restricting credit. If so, Prime Minister Truss would either have to remove the Bank’s control of monetary policy – probably causing a run on the pound – or she would have to do a U-turn and postpone the promised tax cuts. The former option would be bad for the country and the latter for her reputation.

All this suggests that constitutional reform is needed for the future. An incumbent party seeking to change the prime minister in mid-term should be required to face the voters in a general election. The job is too important to be given to an unrepresentative minority like Conservative party members. 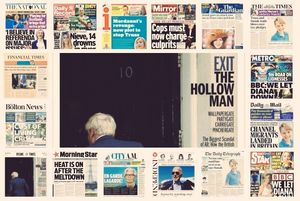