Reactions to reports that Attorney General Suella Braverman has now banned government lawyers from telling her if proposed government actions are illegal.


The Telegraph revealed last night that the Attorney General “has banned government lawyers from telling ministers that their policies are unlawful” – a guidance lawyers have described as an affront as it would call into question their ability to hold the Government to account, asking, “What exactly is our role now?”

“How much more can Suella Braverman debase the role of Attorney General? And how much lower can this wretched government sink?

“This Tory government has learnt absolutely nothing from the demise of Boris Johnson, and is clearly determined to carry on in exactly the same vein. They still think that the rules the rest of us have to follow do not apply to them, so much so they have now banned civil servants from even pointing out when their proposals would break the law.

“They are a bunch of third-rate ministers acting like medieval monarchs, and it does not matter which new leader they choose, their behaviour is not going to change. Only if the British people give Labour a chance to serve will we see decency, integrity and respect for the rule of law restored to our country’s government, and the sooner that day comes the better.”

Former Conservative MP and Attorney General from 2010 to 2014.

“I can’t really work out why this has been done. Clearly, the duty of government lawyers is always – if they’re confronted with a problem, and asked whether something is likely to be successfully challenged – to give their best advice based on their understanding of the law. But if they consider that something on the basis of precedent and its nature is unlawful, they should be in a position to be able to say so.

“It seems very strange that the ‘U word’ should be removed, because, ultimately, it’s still up to the Government whether it wishes to follow its lawyers’ advice. It can decide to go ahead with something which they deem to be unlawful. Indeed, this current government under the present Prime Minister has been rather keen on doing that from time to time.”

Barrister, Founder and Director of the Good Law Project.

“At least in constitutional theory, the laws remain the laws, whatever advice Government gets about them. This is, of course, because the laws that the Government is asking its lawyers to be free to ignore are laws made or authorised, by and large, by Parliament.

“I say ‘in constitutional theory’ because the law is only meaningfully the law if a Government chooses or is forced to adhere to it. The whole point about Braverman’s advice is that Government is giving itself greater space to choose not to adhere to it.

“‘Forcing’ Government to adhere to the law made by Parliament requires that judges withstanding the pressure or bullying to which Ministers subject them. Aside from anecdote, there is a good statistical reason to think that judges might not be succeeding.

“And even if judges do resist the bullying they cannot uphold the law on their own. Someone has to ask them to do it, someone must sue. Very few NGOs are able to take legal action and fewer still can withstand the (often) unethical way in which Government chooses to litigate.

“We at the Good Law Project are making a real difference. We hear from Government lawyers, uncomfortable with what they are asked to do, that our existence gives them a reason to warn Ministers their actions will be challenged.”

“If true this would obviously be outrageous, and also very stupid unless she also plans to ban courts from telling ministers their policies are unlawful. Which I suppose she might try.

“It wouldn’t be consistent with that guidance (and I find it difficult to imagine it happening) for a lawyer to say “there’s only a 30% chance of winning if we’re challenged on this policy, so it’s unlawful and we can’t do it”. Ministers are entitled to take a 30% risk.

“And good lawyers will always say, if possible, “and here are ways we can adapt the policy to increase our chances to 50%” or whatever. Again it’s for Ministers to decide if they want to do that. There will or should be a constructive dialogue about it.

“But if the chances of successfully defending a policy are 0% – because it’s obviously unlawful, there’s a fatal legal flaw – of course, lawyers must point that out. What else are they to say?”

“First, government is entitled to run arguments that its lawyers say are sustainable, but rather more likely than not to lose.

“If you’re sceptical about that, then take the case of your least favourite multinational that has a tax refund claim for £100bn that HMRC lawyers say is 70% likely to succeed. Should government fight it or not?

“But, second, it’s also critical that government lawyers are not put off telling ministers that they are rather more likely than not to lose – and, in cases where the measure is unlawful beyond sensible argument – be able to say “no”: and be able to rely on the AG backing them up.

“Unfortunately, it is hard to have any confidence that Suella Braverman is prepared to say “no”. Indeed, her record shows that she has, for political reasons, been prepared to take or rely on points that are obviously unarguable. As I argue here.

“The problem is that we have an Attorney General who is prepared to run unarguable cases with no merit in order to get good headlines in the Express, and to put forward risible legal arguments in order to give her government cover to act unlawfully.

“When such an Attorney General issues guidance that appears to discourage government lawyers from giving awkward advice, that is how it is going to be read.

“Any competent or principled government should give its lawyers the instructions famously given by our greatest monarch to her greatest adviser. “Without respect of my private will, you will give me that counsel that you think best.””

🧾
“I give you this chardge that you shallbe of my privy counsell and content yourself to take paynes for me and my Realme. This judgement I have of you that you will not be corrupted with any manner of gift, and that you wilbee faithful to the state, and that without respect of my pryvate will you will give me that counsaill that you thinke best, And if you shall knowe any thinge necessarye to bee declared to me of secresye, you shall show it to my self only, and assure yourself I will not fayle to keepe taciturnitye therein, and therefore herewith I chardge you.” — Queen Elizabeth I, 20 Nov. 1558.
— Source: Twitter.

“Dear Suella Braverman
Banning Government lawyers from telling Ministers that their policies are unlawful does NOT make their policies lawful
Yours
Every lawyer in the land.”

Disability – The farce that is PIP. 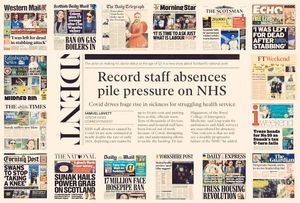