Both Churchill and Johnson had a complicated relationship with the Conservative Party. The only way they compare?

Parallels don’t usually make for good history. They can overly flatter or excuse those involved, or imply a historic figure would act today as they did in the past.

Sometimes, though, politicians themselves invite comparisons with a famous predecessor. It isn’t surprising, then, that Boris Johnson has been judged against Winston Churchill, the leader Johnson has frequently invoked and whom he even wrote a book about.

Churchill served as prime minister from 1940 to 1945 and took up the office again in 1951. Culture Secretary Nadine Dorries has suggested that Johnson could return to the role of prime minister in a similar way.

Nevertheless, by focusing less on personality or policy and more on the fundamentals of party politics, setting Boris Johnson in historical perspective can still be revealing.

There are some apparent similarities in how Churchill and Johnson took power. Both did so without a general election by replacing a serving Conservative premier. Churchill replaced Neville Chamberlain in 1940 when Chamberlain resigned after taking a significant hit to his parliamentary majority in a vote on how Britain was fighting the war.

Johnson won his party’s leadership and replaced Theresa May in 2019 after she repeatedly failed to win enough support for her EU withdrawal agreement bill.

Both became prime minister after previously experiencing spells of relative isolation from Westminster power. Churchill was on the backbenches for a decade before returning to government in 1939, and Boris Johnson spent most of 2008-2016 out of the House of Commons as Mayor of London.

Although the events of the second world war and the pandemic are not directly comparable, Johnson was the first prime minister since Churchill to impose wide-ranging restrictions on everyday life for a sustained period and had to weather the criticism – including from his own side – that comes with a large-scale loss of civilian life.

But these similarities aren’t sustained by the details. Churchill did not become prime minister through a leadership election. Instead, Chamberlain recommended that the King ask Churchill to form a government because Labour’s leaders had refused to enter a wartime coalition but suggested they might under Churchill.

What’s more, Churchill was far more experienced than Johnson was on entering Downing Street. He had held posts across many areas of government, including president of the board of trade, home secretary, secretary of state for the colonies, chancellor of the exchequer, first lord of the Admiralty (twice) and minister of defence.

The less flattering parallels between the two are perhaps more interesting. Like Johnson, Churchill had a complicated relationship with the Conservatives. Before the second world war he had often been thought of as unreliable and reckless. Conservatives had reason to question the depth of his party allegiance: having switched from the Conservatives in 1904, Churchill held high office under Liberal leaders before returning to the Conservative fold as chancellor in the mid-1920s.

Johnson’s case is less extreme, but some of his former allies in parliament came to see him as similarly unreliable on issues such as Brexit or coronavirus policies.

Both also let their attacks on the opposition outrun good taste. Johnson has been condemned for attacks on Keir Starmer’s record as director of public prosecutions after he wrongly claimed the Labour leader failed to prosecute Jimmy Savile. Churchill was roundly criticised for alleging Labour would need a Gestapo – Nazi Germany’s secret police – to implement its policies.

Both were also associated with advisers whom others blamed for their leaders’ weaknesses. In Churchill’s case, his friend and advisor, the newspaper baron Lord Beaverbrook, was said to be behind the aggressive anti-socialist rhetoric that made the Conservatives look out of touch in 1945.

As chief political adviser, Dominic Cummings was similarly linked to Johnson’s proroguing of Parliament which the supreme court ruled to be unlawful. More recently, the Number Ten press operation was at the centre of criticism about how the prime minister responded to coronavirus rule-breaking.

Johnson may actually more closely resemble Edward Heath, who served as Conservative leader between 1966 and 1975 and who became prime minister in 1970. Like Johnson, Heath delivered a historic change in international relations – albeit in an opposite direction – by taking Britain into the European Economic Community.

Like Johnson, though, Heath also faced a fossil-fuel crisis worsened by war as well as an economy characterised by low growth and high inflation. Heath lost office in 1974 after a run of industrial relations crises which – until coronavirus – were arguably the biggest test faced by emergency planners since the war.

Johnson loyalists like Dorries might be tempted to think comparisons with Churchill offer Johnson a way back. After all, Churchill led his party to a historic loss in 1945, failed to win in 1950 but returned to Downing Street a year later. Heath had racked up three election losses against one win by the time Thatcher challenged him.

Both Churchill and Johnson had a complicated relationship with the Conservative Party. | Flickr/Number 10

But such parallels offer false hope. Churchill and Heath lost general elections before becoming prime minister, but they retained enough support from senior colleagues and MPs to remain party leader throughout. Neither gained office after losing their party’s leadership.

The political lesson is clear: losing elections may not be fatal to a political life, but losing your parliamentary party almost certainly is. 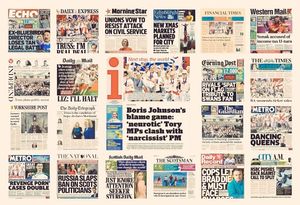