From the start, the Tories chose to reduce public investment and encouraged companies to prioritise profits over investment too. The result: whilst we claim to be a rich country, we now have 14.2 million people in poverty.

From 2010 the Tories chose to reduce public investment, and by cuts to corporation tax they encouraged businesses to prioritise profits over investment too.

But because we didn’t spend on investment, share dividends kept on rising. So despite wage stagnation, inflation is at 10%.

It all started with David Cameron. | Flickr/Number 10

Now, I am not suggesting we should rush to conclusions. It is reasonable to give things an opportunity to prove they work. Or time to allow teething troubles to be fixed.

If any of this was going to work, it surely would have worked by now.

The stock market is not the country. GDP is not success.

That’s the intellectual end-game of this policy. But the theory has been stretched as far as it will go.

We NEED redistribution – and this isn’t even a party political point, simply a practical one. We NEED investment.

And we need to decide what the country is for. And then we need to build towards it.

What do I mean by that?

I am not defending empire AT ALL, but due to it our vision of ourselves was built around multiple pillars:

(I absolutely accept that most of this was stolen, most of it was corrupt, and the rest of it is just a story we tell ourselves about “Great Britain” without much justification – it excluded most of the UK and all of our colonies).

We aren’t manufacturers. That’s gone. We under-invested and lost it.

We aren’t a military power in any significant sense.

We have blown our global influence, and burned through our reputation as stable.

Our own government is ripping up our legal status.

We have slashed education.

And our finance sector is drifting off to Frankfurt and other areas, we have lost our AAA status; and even if it’s still a big sector, it can’t hold up an entire country. Especially not if we don’t tax it enough, or have a government complicit in letting it slip past tax authorities.

A big recession is coming. It will be global, it will last about a decade, and it couldn’t be a worse time.

Every nation needs to spend like hell to prepare (and reduce) climate catastrophe, and this government (and I worry Labour too) won’t do what is needed.

We need to decide... What are we, now all that “empire” stuff is over?

For me, the sensible thing is to invest HUGELY in renewables. Fight Chinese steel tariffs and build nationalised steel to allow us to manufacture our own wind, wave and solar. Invest in the science and engineering to do it. The climate demands it, and although steel is carbon heavy, it is a once-in-50-years burst of production that enables domestic green power and hundreds of thousands of jobs.

Invest in domestic housing, in two streams: build new, and refit old. Make them green. Insulation, solar panels, better ventilation for the heat, green boilers, replace gas. Create jobs to do it, public money to do it.

Build aquifers and reservoirs. Don’t wait for the market to do it. The market wastes billions of litres of water a DAY.

Plant trees and re-wild everything we can

Do this at once – it is a cheap, simple way to (partially) slow climate change while we adapt. And... it creates instant jobs, which we need in the recession about to begin.

We have lost a decade of vital training for new doctors and nurses, and we will suffer for years as a result. But the only way out is to train now.

Create jobs to do it. Infrastructure for electric vehicles too. Not just fitting things made overseas – create plants to make our own recharging points. This creates jobs, which pay tax, which repays the borrowing for all the investment.

There are no cheap and simple solutions – it will be costly, and we will have to borrow hugely to do it. It will push our debt/GDP ration up to 200%, I would guess. But it will create jobs during the recession, investment will generate the money to repay debts after the recession, and (to me at least) importantly, it will provide the nation with a direction and a purpose – after 12 solid years of trashing everything we built – what I guess you could call our “national persona” around.

I know not all of this is perfect. Please don’t kick it down, instead reply with BETTER ideas for how to dog ourselves out of this simply dreadful position.

We have tried cutting everything and wrapping the corpse in flags, and it doesn’t seem to work.

The Tory chancers trashing the rule of law. 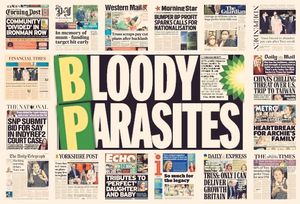