The government’s public procurement approaches were not appropriate at the pandemic’s start, especially when dealing with Randox Laboratories, the National Audit Office reports.

Government had to move very fast at the start of the pandemic to increase testing capacity, but did not document key decisions adequately when awarding a contract to Randox Laboratories Ltd (Randox) for COVID-19 testing services, according to a report by the National Audit Office (NAO), the body that scrutinises public spending for Parliament and is independent of government and the civil service.

At the start of the pandemic, the government had to act quickly and in exceptional circumstances to scale up COVID-19 testing activity, given the lack of mass testing capacity in the UK at that time. As part of these efforts, the government contracted with private sector suppliers to provide the testing services and goods needed as part of the pandemic response. Ministers were involved in discussions with testing suppliers, including Randox, as part of their role to drive progress on building the unprecedented testing capacity required in the UK.

Between January 2020 and December 2021, the Department of Health & Social Care (DHSC) and Public Health England awarded 22 contracts to Randox, or its strategic partner Qnostics Ltd, with a maximum value of £776.9 million. By value, almost all the contracts were for the provision of testing services. Sixty per cent (£463.5 million) of the total value of the contracts were awarded directly without any competition under emergency procurement rules.

The DHSC first awarded a £132.4 million contract to Randox for testing services on 30 March 2020. DHSC told the NAO that a competitive tender was ruled out due to the need to move quickly, and that it could not award the contract from an existing framework as the value of the contract exceeded the framework limit.

DHSC provided the NAO with no documentation on detailed contractual negotiations and consideration of potential conflicts of interest for its first testing contract with Randox.

DHSC also did not disclose Randox’s attendance at four ministerial meetings as it should have done in line with transparency requirements. Meeting minutes were kept for two of eight meetings on testing involving ministers and Randox that took place in 2020 and 2021.

In September 2020, the Labour/Co-op MP for Walthamstow Stella Creasy asked the then-Health Secretary Matt Hancock a question in the House of Commons related to issues with voided tests produced by Randox.

“I am delighted to have just heard the Secretary of State’s previous answer, because, in a former life, he and I both served on the Public Accounts Committee, so I know that he will understand that every taxpayer living in a community facing a lockdown or unable to get a test deserves a straight answer on whether his Department has imposed a financial penalty or withheld payments for the many voided tests undertaken by Randox. Will he give an answer to that question today?”

“Randox delivers a very significant number of tests every single day—it is a growing number. In fact, it is currently outperforming the allocation that we have asked it to deliver, and I pay tribute to every single person who works at Randox for the work that they have done and the part that they have played in keeping people safe. Everybody who gets a Randox test result, just like every other test result, has more information that they can use to keep themselves safe, and we have more information that we can use to try to keep the whole of society safe.”

The gaps in the audit trail mean that the National Audit Office is not able to provide positive assurance in the normal way, but it has not seen any evidence that the government’s contracts with Randox were awarded improperly.

In October 2020, DHSC chose to award a variation of its original contract to Randox worth £328.3 million, rather than undertake a competitive procurement. 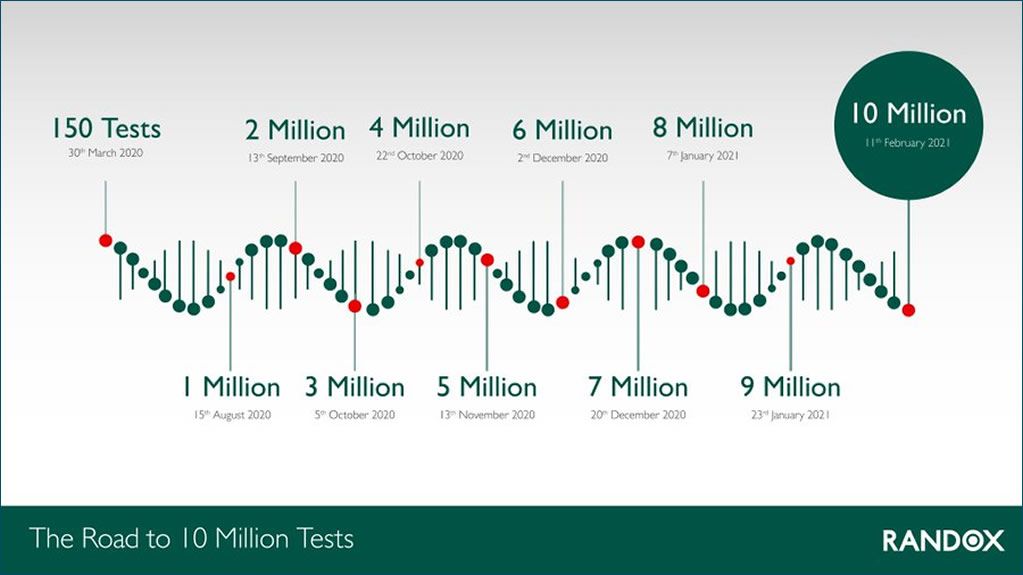 Further contracts were awarded to Randox between April 2021 and March 2022. These were a mix of direct awards without competition, direct awards that were variations to existing contracts, and awards from framework agreements.

❕
Awards from framework agreements are where Randox had previously undergone a competitive process to be appointed onto the framework.

Gareth Davies, the head of the National Audit Office, explained that “the overriding need to create a high volume testing capacity rapidly at the start of the COVID-19 pandemic meant that standard public procurement approaches were not appropriate. Even taking these exceptional circumstances into account, the documentation of the decision-making process for such large contracts was inadequate.

“Our previous reports on COVID-19-related procurement and those of Nigel Boardman have recommended improvements to ensure an adequate audit trail is maintained even when the priority is speed of action. Government has already started to implement some of these improvements, and we will follow up progress.”

“Randox states categorically that political lobbying played no role in the award of Covid contracts to the company. The Department of Health and Social Care (DHSC) contracts to provide Covid-19 testing were awarded on merit to Randox as the largest healthcare diagnostic company from the UK. The entire process was transparent and compliant with government regulations in a time of national crisis.

“Randox has almost 40 years experience in testing and diagnostics: it was one of the first companies in the world to develop a Covid-19 test and to have developed extensive laboratory, IT and logistic infrastructure to support large scale testing operations. The decision to award Covid-19 contracts was fully validated by the company’s performance and delivery under the terms of the contracts.

“The company was awarded its initial Covid contract on 30 Mar 20 and, within a short period, had exceeded the initial Covid-19 testing capability of the entire NHS.

“Subsequent DHSC planning required Randox to deliver 17,000 tests per day by the end of April and more beyond then. To facilitate and ultimately enable these extraordinary levels of delivery, Randox was temporarily allocated 5 extraction systems from universities in order to increase capacity. DHSC directed the Army to collect equipment, in line with their support for all Pillar 2 laboratories.

“This was a pragmatic and transparent move by the DHSC to meet a critical national need to save lives and ease overwhelming pressure on the NHS. The extraction systems were returned once the systems ordered by Randox, against the backdrop of a global shortage of such equipment, had been delivered and installed.

“Randox and its staff have striven tirelessly and innovatively to support the national Covid-19 testing effort. We are proud of our collective achievement at a time of crisis in being the only Pillar 2 laboratory to have reported in excess of 100,000 Covid-19 results in one day.”

“In response to the greatest public health emergency that we have faced for a generation, the Government engaged with many businesses—big and small—as part of an unprecedented national effort. On 3 February, we responded to the Humble Address and laid the documents before the House. We are committed to transparency and helping the House perform its valuable scrutiny, and the Department dedicated significant resources to reviewing about 11,000 records to identify the 35 relevant documents. They show how we took every possible step to build the huge infrastructure for testing that we now have in this country—the biggest testing programme in Europe. The programme has done so much to stop the spread of this deadly virus and given us all hope that we can learn to live with covid-19.

“Randox has been globally recognised in the diagnostics industry for nearly 40 years and even as early as March 2020 had lab-based PCR testing capacity for covid-19. Robust rules and processes are in place to ensure that all contracts are awarded in line with procurement regulations and transparency guidelines, and that any potential conflicts of interest with respect to commercial matters are appropriately managed. Direct awards, such as in this case, are permitted by public contract regulations for reasons of extreme urgency brought about by unforeseeable events. I am sure that no hon. Member would deny that the situation was one of extreme urgency.

“As the House would expect, Ministers of course have a role in approving contracts, but their approval relies on the impartial evaluation conducted by civil servants. I reinforce to honourable Members that Ministers are not involved in the assessment and evaluation process for contracts, and that the documents given to the House show no evidence that any of those principles have been breached. Instead, they plainly show that we did everything in our power to keep this country safe at a time of crisis, as the British people would expect.”

“The Randox files published last week, later than the Government said they would be—that was not acknowledged by the Minister—paint a picture of a Conservative Government who are simply unfit for office. That Conservative Government played fast and loose with public money. They handed Randox a £133 million contract without competition. The Minister talked about every possible step being taken in testing infrastructure, but let us remember what happened. Randox tried to requisition equipment from universities that, because of the files that were released, we now know had to be stopped. Vital tests in care homes were voided, and 750,000 tests were recalled. The Government’s response was to hand it a second contract worth £350 million, again without competition.

“We now know that both the civil service chief operating officer and the Minister, Lord Agnew, sounded a warning alarm. That Minister said that the Department was paying “dramatically over the odds” for Randox’s services, but the Government ploughed on. Why was he ignored, and did the Department do what he asked, and introduce a competitive tender process by March 2021? There does not seem to have been the operation of robust rules that the Minister referred to, or an impartial evaluation. Was that put into place or not?

“Secondly, there are still no minutes of that crucial meeting on 9 April, just a rough draft email sent seven months later. Two years on, the Department cannot even explain who was there. We now know that Health Ministers held another four meetings that were never declared in the Register. How many more secret meetings were there?

“That brings us to Owen Paterson who, as we now know from these papers, is called “O-Patz”—really, Mr Speaker, is there any clearer sign that we are in the twilight days of this Government? The files show that this former MP, a paid advocate for Randox, was arranging meetings with the Health Secretary in the Division Lobby, a place to which only MPs have access, and where it is impossible for civil servants to join them—hardly the appropriate management of commercial interests that the Minister referred to.”

Four ways Brexit and the loss of free movement have made life harder for mixed British-European families.

Is race an issue that might explain why Rishi Sunak is doing so badly among Tory members?