When Nicola Sturgeon met Liz Truss at the COP26 climate summit in Glasgow last year, the Foreign Secretary didn’t talk to her about climate change. She talked about... Vogue.

Responding to a Q&A with the broadcaster Iain Dale at the Edinburgh Fringe, Scotland’s First Minister Nicola Sturgeon said that shortly after being interviewed by Vogue last year, she met Liz Truss at the COP26 climate summit in Glasgow. Truss, she said, was keen to find out how she too could appear in the fashion magazine.

“We were at the Kelvingrove Museum. Her and I were there early and waiting for the leaders to arrive – Biden, Merkel etc. We were there quite a bit early, so we were talking to each other. I remember this quite well actually.

“I had just been interviewed by Vogue. So I’d just had a photoshoot, as you do. And that was the main thing she wanted to talk to me about. She wanted to know how she could get into Vogue – and she calls me an attention-seeker.

“I said... Well, they came and asked me. And I didn’t really mean to do this, but I then said it hadn’t actually been my first time in Vogue. She looked a little bit as if she’d swallowed a wasp.

“I’m sure she’ll be in Vogue before too long.

“I remember it because there we were at the world’s biggest climate change conference in Glasgow, world leaders about to arrive.

“That was the main topic of conversation she was interested in pursuing. And once we’d exhausted that it kind of dried up.

“I’m sure we’ll have many more conversations about many more substantive things.”

Our current COVID vaccines could soon be updated to target new variants. 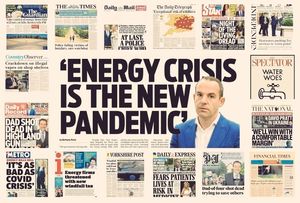