Salman Rushdie, the man who told stories about India.

Salman Rushdie features in almost every story about India, a country that he is fascinated with, that is in his bones. But is he the master or victim of our times?

The day that Salman Rushdie was stabbed in Chautauqua, in upstate New York, an openDemocracy piece on India-Pakistan at 75 quoted the novelist.

“The growing likeness,” between India and Pakistan, the piece said, “has struck others, not least Salman Rushdie, whose acclaimed allegorical novel ‘Midnight’s Children’ (1981) centred on India and Pakistan’s inextricably linked fates. At a seminar at Brown University in the US last November, Rushdie noted that in these past seven decades, neither country had fared well. “I used to think that India had got things right to a degree that Pakistan had not,” said Rushdie. “I find it hard to believe that any more — not because of the improvement of Pakistan, but because of the deterioration of India.”

Mr Rushdie features in almost every story about India. Pakistan, not so much.

One might wonder why. After all, though Mr Rushdie was born in Bombay to parents of Kashmiri ethnicity, after school in England, he went to his immigrant parental home in Pakistan. The senior Rushdies had migrated to the new Muslim homeland.

But in the stories he tells, Mr Rushdie doesn’t seem to appreciate Pakistan that much. It is India that he is fascinated with, it is India that’s in his bones.

As Mr Rushdie wrote in 2021, on the 40th anniversary of his Booker-winning novel ‘Midnight’s Children’: it’s basically a history book “looking for an answer to the great question history asks us, what is the relationship between society and the individual, between the macrocosm and the microcosm? To put it another way: do we make history, or does it make (or unmake) us? Are we the masters or victims of our times?”

One might ask the same question today as Mr Rushdie struggles to overcome the vicious attack on him in upstate New York. As the storyteller goes through the latest chapter in the gripping plotline that is his life, is he the master or victim of our times? 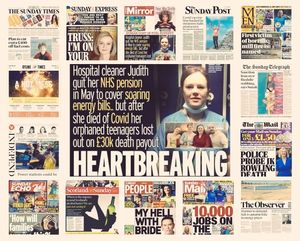