The Home Office is denying rights to thousands of EU citizens and hundreds of thousands of people who are unable to join their family members, due to the hostile environment towards immigration.

This week we have seen the story of a Spanish-born woman come out in the Guardian [1], as she is still fighting for her right to work, a year since she was fired from her job due to lack of status.

Investigative journalist Amelia Gentleman uncovered that the woman who came to the UK as a baby 45 years ago is still unable to prove her immigration status, trapped in a spiral of bureaucracy, unable to claim unemployment benefits and being pushed into debt.

A freedom of information request revealed she is just one of 43,296 people who have been waiting for more than a year for a decision, as of June 2022. Her story shows us how safeguards are failing too many people, leading to suffering for many. It is shameful for people to be treated so unfairly by the Home Office.

At the same time, it was very disappointing to see in this week’s news a focus on a very small minority of EU Settlement Scheme[2] (EUSS) cases where marriages have been found to be disingenuous, rather than the thousands of families who are being split apart by the Home Office. Articles shared that the Home Office claimed 365 cases of disingenuous marriages. We know that even out of these, some decisions are overturned on appeal.

To put this in context, there have been 490,030 applications made by non-EEA citizens to the EUSS, most of whom are EU citizens’ family members.

The Home Office is denying rights to hundreds of thousands of people who are unable to join their family members, due to the paranoia induced by this very small number of cases, as well as the overall hostile environment towards immigration.

This has real, devastating consequences. For a Gambian father we have been in touch with, it means he has never met his 2-year-old son. His Swiss wife has been on the front line throughout the pandemic, as a care worker, and is left alone under constant pressure and stress.

If you or someone you know have either been waiting for more than 6-12 months for a decision in the EU Settlement Scheme, or for a Family Permit to join family in the UK, we urge you to get in touch with us and get your voice heard.

▫ the3million, the largest group of EU citizens in the UK.
▫ Andreea Dumitrache, Communications Manager of the3million.

Gordon Brown economics versus Liz Truss tax cuts: A new twist in the battle to resolve the UK’s cost of living crisis. 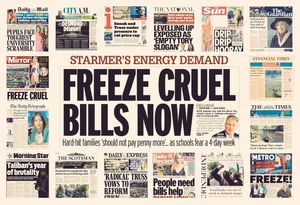 How the hostile environment is affecting EU citizens.