Rishi Sunak is more authentic and emotional, and Liz Truss more analytical, according to computerised text analysis of a recent hustings.

In a series of hustings across the country, Rishi Sunak and Liz Truss are talking to Conservative party members about what they plan to do if elected as leader of the party and prime minister of the UK.

The topics of discussion are, by now, well established, from taxes to energy prices. But, at a deeper level, the way the two speak is potentially very revealing about what kind of leader they would make.

The words that people use can be “honest signals” that give insights into their underlying psychological processes and potential behaviours. And since these linguistic choices are subtle, speakers themselves may not be consciously aware of them. Also, they’re hard to conceal.

I used computerised text analysis to analyse the speeches Sunak and Truss gave during a hustings in Eastbourne on August 5 and compared their scores with each other and with overall averages for three key language variables: “authenticity”, “emotional tone” and “analytical thinking”.

The findings were unexpected and in some ways belied the candidates’ respective reputations. Sunak came out as more authentic and emotional while Truss was more analytical. But, rather worryingly, both were below average for analytical thinking and neither checked all the boxes.

Sunak was more authentic than Truss

Sunak is often criticised for his slick PR operation and has been accused of being out of touch. But the analysis revealed his speech to be more authentic than that of his rival.

Speakers are rated as more authentic when they reveal themselves in an honest way through language that’s more personal, humble and vulnerable. Words indicating authenticity and self-awareness include greater use of the first-person singular “I” relative to the first-person plural “we”. Sunak’s I:we ratio was higher than Truss’s. This suggests that he accepts personal ownership of the claims he is making during the hustings rather than inferring some kind of collective ownership.

Margaret Thatcher has been repeatedly invoked in this leadership contest, and it’s interesting to note that she took the use of the word “we” to new heights by referring to herself using the “royal we”. When her daughter-in-law gave birth in 1989, she emerged from Downing Street to announce, “We have become a grandmother.”

This was later interpreted as an indicator of her emerging hubris syndrome, which eventually led to her downfall at the hands of her party.

Sunak’s language was also more vulnerable. For example, he illustrated vulnerability when he said of his opposition to tax cuts: “What I’m not going to do is pursue policies that risk making the situation far worse.” His words confirmed that he knew he was risking alienation from those Tory Party members who favour tax cuts.

Sunak’s language showed an above-average level of authenticity compared to the wider public. Truss, on the other hand, was below the average.

Emotional tone is an essential skill if a potential leader wants to relate to the people they seek to lead. Sunak was ahead in this respect. He scored above the average for emotional tone.

A linguistic analysis of emotional tone involves identifying all the words that express sentiment, both positive and negative – such as “happy” or “bad”.

In two particularly emotional sentences from his speech, Sunak said:

💬
“I will give you my everything, my heart my soul, to ensure that each and every one of you here this evening will always feel enormously proud.”

💬
“The bonds of family are far greater than anything any government could ever hope to replicate.”

By contrast, Truss displayed a lower and below-average level of emotional tone in her speech.

There is a wealth of evidence suggesting that emotions play an integral part in election campaigning, something Truss may need to reflect upon if she wins the leadership contest.

Analytical thinking can be detected when people use words that suggest formality, logic, hierarchical relationships and quantities. For example, Truss used more quantifiers than Sunak. Examples included: “first of all”, “extend to more countries”, “fulfil all of our promises”, “deliver more deals”, “investing more in” and especially “we need”, as in “we need more of that sense of pride”.

Worryingly though, both candidates were below the average for analytical thinking. This might indicate that they haven’t really thought through their ideas, are avoiding being too specific or even flip-flopping in response to each other’s claims and counter-claims in frantic efforts to win votes.

What do people want in a leader?

It’s regrettable that neither of the candidates checks all the boxes by being emotionally aware, analytic and authentic.

For the time being, the Conservative Party members are the ones who get to decide which of these qualities are the most important in a leader. But it won’t be long before the victor has to face the wider country.

Voters outside the Party membership may have different ideas about which combination of these qualities they feel are needed by the next prime minister and a misjudgement now could cost the Conservatives dear at the next general election. 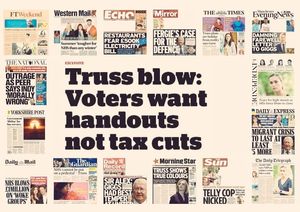