The Conservatives promised that their Brexit would deliver sunlit uplands, what they are delivering is unlit slum lands.

Having had the political equivalent of a major piss-up in the pub with Boris Johnson, trashing the venue in the inimitable Bullingdon style and expecting the little people to clean the mess up, the Tories have now staggered home, still not ready to face the aftermath or deal with the consequences of their bad behaviour.

“Truss has no principles or ideology”

With the likely election of Liz Truss by party members, a woman who was memorably described by former Conservative MP Matthew Parris as a balloon of vast ambition perched on a pin head ¹, what the Conservatives are now doing is deciding that they fancy something to eat after their almighty bender, so still drunk, they’ve put the chip pan on, and now they are passed out on the sofa. Truss has no principles or ideology. For her, it is whatever gives her power or gets her noticed. Every day is a new day for Truss. What she said yesterday has no bearing on today. The whole of Scotland on the other hand is to be held to the eight-year-old campaign rhetoric of Alex Salmond.

The Truss campaign is far ahead of Sunak in all the polls of Conservative party members that have been published – most polls have given Truss a lead in excess of 30%. There are only two weeks remaining in a contest that seems to have dragged on forever. Most of those eligible to vote will have already done so, and at this point, it is vanishingly unlikely that Sunak could catch up, even in the implausible event that all those who are still to vote cast their vote for him.

Truss is so confident that the campaign is as good as over that her team have released details of who she is likely to appoint to her cabinet, so we have some idea of the chip pan fire that awaits us. ² An awful lot of barrels had to be scraped through to get to this lot. Kwasi Kwarteng, Suella Braverman, James Cleverly, Jacob Rees-Mogg and Kemi Badenoch will take key roles in the new cabinet under Liz Truss, according to a report in the Times. ³ All of them are on the far right of a Conservative party that has moved increasingly to the right over the past decade. The far-right John Redwood is tipped for a senior post under Kwarteng the likely new Chancellor of the Exchequer.

Kwarteng was one of the authors of the infamous Britannia Unchained. Redwood is currently demanding that state regulation of water and energy companies be scrapped. Just imagine what these companies will do if they don’t face even minimal constraints. The privatised water companies in England are already pumping untreated sewage into the sea, Britain is literally sitting in a sea of sh*t. Meanwhile, the energy companies are enjoying soaring profits as domestic energy bills go through the roof.

“Tax cuts put money in the pockets of the better off”

To a man and woman, this lot are demented pseudo-libertarian lunatics who believe that the problems of the British economy are largely due to working-class people not working hard enough. It’s kind of surprising that they are all so viscerally opposed to socialism considering how frequently they have been publicly owned. Their answer to the cost of living crisis is tax cuts. How can tax cuts for people who don’t pay tax help people who don’t earn enough to pay tax? They can’t – it’s nonsense. Tax cuts put money in the pockets of the better off. Hundreds of thousands won’t be able to afford their energy bills and we are in addition facing a real threat of blackouts during the coming winter. The Conservatives promised that their Brexit would deliver sunlit uplands, what they are delivering is unlit slum lands.

Like May and Johnson before her, Truss has no intention of governing in the interests of the UK as a whole and most certainly is not interested in any idea of reconciliation with that half of the UK that voted Remain, or the half of Scotland that wants independence. Truss intends to bludgeon the opposition into obedience. The European Research Group is now in charge. With Braverman as Home Secretary and Rees-Mogg as Levelling-up Secretary, it can indeed be even worse than Johnson, Patel and Gove. We are about to experience an even deeper dive into the stink pit of unthinking Tory bigotry. Truss promises a disunited Kingdom weighed down by the hateful uselessness and vindictiveness of what it pleases itself to call a government.

Suella Braverman is tipped as the next Home Secretary, a woman who makes the current incumbent seem reasonable and empathetic by comparison. And you thought Priti Patel was terrifying. Braverman wants to dump the ECHR, she is heavily involved with Freeports and Charter Cities that will be sold off to private firms who will be able to make up their own rules and will not be bound by rules on holiday or sick pay, minimum wages, or the right to unionisation.

Jacob Rees-Mogg is likely to be appointed Minister for Levelling Up. That sounds like a joke, and indeed it is, although Truss is apparently deadly serious about it. He changed his mind about there having to be a General Election if Johnson was deposed as leader ⁴ and replaced with someone else. ⁵ See, you ARE allowed to change your mind from a previously espoused political position. But not you Scotland, not you.

Rees-Mogg, who questioned the common sense of those who were killed in Grenfell, ⁶ is now to be put in charge of the department managing the Grenfell Tower Memorial Commission. ⁷ It is difficult to imagine a more perfect image of this entire chip pan fire of a government than a performative fake aristocrat in a cosplay Victorian frock coat being given the job of improving regional inequality. The idea of Rees-Mogg being in charge of levelling up is as bizarre as putting George Michael in charge of driving lessons. Still, as far as Truss is concerned, Rees-Mogg will be ideal for the job since we all know that to this Conservative party ‘levelling up’ means withdrawing much-needed funding from deprived inner city areas and giving it to leafy Tory districts like Tonbridge Wells.

It’s only going to get worse in Liz Truss’s Great British chip pan fire. Buckle up. We are in for a bumpy ride. 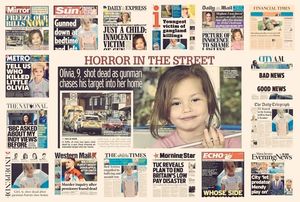