I think the Tories are heading for a decade of strife and internecine warfare, worse than the period after Thatcher. And I think – although this is pretty speculative – that it could lead to a complete split between the two wings. Here is why.

The Tories seemed powerful under Boris Johnson, but that’s because he used an infinitely vague fantasy of something called “Brexit” to unify a coalition with vastly differing political views.

That coalition is now collapsing. The impulse that kept them together is gone.

At its heart: a conflict.

(I am not being critical of “low info” voters by the way – most people pay little attention to politics, and it is not a character flaw if you don’t have enough info or detail to form massively informed opinions. That’s normal.)

Since 2016, traditional Tories – the Rory Stewarts and Ken Clarkes – have been replaced by a cohort of (essentially) UKIP MPs posing as Tories. This turned the Tories – the essence of the establishment – into a pretend anti-establishment party. Which is mad.

But electorally, it worked: there was this Big Demon in Brussels against which to rebel. That’s gone now. The new Big Demon is Westminster again, and the results of Brexit are pretty sh*tty. Even its biggest cheerleaders publish weekly articles deploring how it is going.

“Without unifying enemy, the coalition of voters will fall apart”

So, this means there is no big enemy. They are always inventing little enemies – trans people, lawyers, statues, “woke blobs” – but none of them appeals as broadly as the (infinitely vague) promise of Brexit. Without that unifying enemy, the coalition of voters will fall apart.

Inside parliament, it is (for the Tories) worse. They are out of ideas, and their one historical “big idea” – hack at the economy with a machete until it feels lean enough to jump up and run around – has left us with a bloody corpse of an economy.

Only 14% of her MPs backed Liz Truss in the leadership run-offs. She has little popular support inside parliament. She is appealing to the members – around 1 in 250 voters – with a promise of more cuts. Her MPs must know this is madness. And amongst regular voters, no mandate.

About half the former Tory cabinet members still in parliament have said her economic plans will be a disaster. Dozens of them are far more smart and/or eloquent than she is, and will sit on her backbenches, criticising her publicly or privately. She will be undermined at every turn.

She will have no mandate in the country. Poor support from her MPs. The smartest current cabinet ministers probably won’t get jobs. She is facing a massive cost-of-living crisis. And the only way to tackle it is to break her promises to her party members – the only group backing her.

If she cuts taxes she will f*ck up the economy. But If she doesn’t cut tax, her UKIP-style MPs will rebel (with the support of their local party members). From day 1 Truss will be in crisis mode.

I think she will look for a way to call an election to get a mandate. But Tory MPs will try to delay a General Election for as long as possible. Half of them fear losing their seats, they will not back an early election. She is also over 15% behind right now in polls – there is a possible small bump when Truss becomes PM, but it will vanish in three weeks. A General Election would be career-suicide for them.

“The Dissolution and Calling of Parliament Act 2022 received Royal Assent on 24 March 2022. The Prime Minister is now able to request a dissolution at the time of their choosing.”

So (I think) she will be trapped in Downing Street until 2024, haemorrhaging votes. Polls will cause panic in her party, and the fault lines will become gaping chasms. On one side, ultra-Brexit libertarians like Jacob Rees-Mogg. On the other, sane(ish) members wanting to fix the economy.

They also – and this is something that affects all parties after a long time in office – have completely run out of talent. They are not going to suddenly discover a new political giant on the backbenches. Their PM and cabinet will be entirely composed of third-raters.

I am no Tory, but Thatcher had a cabinet consisting of Major, Heseltine, Clarke, Hurd, and Patton – each one a genuine heavyweight. She will have James Cleverly, Penny Mordaunt, and Suella Braverman, locked in a fearsome tussle over the award for Most Over-Promoted Mediocrity.

They are already tearing one another apart in the leadership hustings. Put them under 2 more years of intense economic and political pressure, and they will be at one another’s throats, yanking the party in two.

Nothing is certain, but I am confident they will lose the next General Election.

“A right-wing libertarian populist party in 2025”

And once out of office, there will be a bloody internecine battle for what “The Conservative Party” means. Is it centre-right? Or a libertarian, Trumpist party? Parts of it are, certainly. But not all of it, and in the UK a vast majority of voters are not ready for that.

I wouldn’t be shocked to see – sometime in 2025 – a large rump of Tory MPs quitting and creating a right-wing libertarian populist party, which would include – and possibly even be led by – Nigel Farage. It would incorporate former Britain First members, UKIP, and right-wing Tories.

I also wouldn’t be shocked to see the UKIP grouping taking full control over the party, and the remaining “moderate” Tories attempting to jump ship to the LibDems. But the LibDems aren’t exactly welcoming to Tories after the 2010-2015 coalition years. Moderate Tories might have to create a new party.

(This is pretty speculative, but I wouldn’t be surprised at all by either outcome.)

Regardless, I think we are seeing the last of the UKIP domination of what we know as the Tory party, which began after 2010 and is now eating itself alive.

Its members are dying out, its central credo has proven false, it has run out of big enemies around which to unify voters, and its economics have failed utterly. Even if that UKIP wing wins the battle for control of the Tory party, the fight will damage the party massively.

I think we are looking at an absolutely disastrous next 2 years (for the country). This will mean an even more disastrous 2 years for the Tories, and (I think) a further decade of schism and infighting. Liz Truss might be the last PM of the “big tent” Tory party we all know. 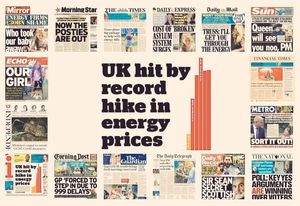