I had a dream last night where I was briefing a Prime Minister about practical, humane, ways to reduce channel crossings. You could tell it was a dream because they actually listened.

Let’s pull this out of the realms of dreams and into reality though.

First off, anyone who presents a “quick fix” is lying. There is no single simple solution to reducing channel crossings and tackling smuggling and trafficking gangs.

There has been some talk about processing asylum applications in France. Not an overly bad idea, but it carries its own range of issues. The UK, as with many other countries, doesn’t allow for people to seek asylum unless they are actually present in the country. So that needs to change.

It also isn’t as simple as just setting up an office. You need to ensure that people seeking asylum get access to professional legal assistance. You need to provide accommodation for them while they wait for outcomes. Obviously, this is expensive, relies heavily on French cooperation etc, but also it seriously risks creating effective prison camps for asylum seekers, which as shown with places like Napier, just increase other problems, particularly mental health issues.

You then have the question of what happens if claims are rejected. You need a solid and robust appeals process for asylum seekers. A significant proportion of claims are found to be legitimate upon appeal, so if you don’t provide that opportunity you risk removing refugees.

Even with all the systems in place, we’re back to what happens if a claim of unsuccessful? Who is responsible for returns? Would it be France or the UK? The difference is particularly important since Brexit as you can’t just fly someone to a country and dump them.

You need agreements in place with those countries in order to return people. So whether France or the UK is responsible determines those returns agreements for example. So even the “process applications in France” plan has problems.

Then there is the “process claims in British embassies” proposal. Again there is the matter of having to change current policy that asylum claims have to be made in the UK, but that is, quite frankly, the least significant issue here.

Asylum claims take time. The numbers of those waiting more than 6 months for an initial decision has been steadily rising for years, including during periods when the number of applications dropped off, so it’s not about the amount of people applying. If you’re fleeing persecution there is an obvious issue with hanging around in a country you are being persecuted in at the best of times. If you are seen going back and forth to the British Embassy, well, that’s going to raise red flags with someone and put you at more risk.

Emergency humanitarian visas present one possible solution, i.e. you get it and can fly to the UK to have your application processed, but they still rely on being able to get to a British Embassy without being picked up, and then a potential wait for them to be processed. Processing claims, or humanitarian visas, in any British Embassy removes some of these issues, i.e. you get to another country and then head to the embassy, but as most embassies don’t have significant residential capacity you then need to look accommodation etc.

If you are processing claims you then also fall into the same issues faced with the processing in France plan, access to legal assistance, appeals, what happens if your application is refused etc. So, again possible help but not a solution on its own.

Another idea is to create “safe and legal routes”. I use the phrase myself, but, let’s be honest, it’s a bit fluffy. The government uses the term to describe official “resettlement routes”, but, globally, such routes account for only about 4% of all asylum places.

Resettlement routes are helpful, but they are also limited. If enacted properly – and, let’s be honest, the UK is a pretty good of example of how they aren’t – they only really function for large scale refugee movements, such as conflicts.

Fleeing a conflict is not a necessity for someone to seek asylum. Persecution takes many forms, and can, in practicality mean just a handful of people needing to flee a State out of fear of it.

If we take “safe and legal routes” to mean “easier access to the UK to seek asylum” then one potential way to do so is to remove what are known as “carrier liability fines”. These are where airlines, ferries, etc., are penalised for allowing someone on without the correct visa. It would definitely make a difference, but it would also require international cooperation, which hasn’t ever been exactly forthcoming in this area, so, again, faces serious obstacles in being implemented.

We can definitely rule out “deterrents” as a solution, and I am including everything from the Rwanda plan and Albanian agreement through to wave machines in the channel and “pushback” operations. Not only do these proposals inevitably lead to conflict with international, and domestic at times, law, they just don’t work.

The UK takes fairly few asylum seekers in the grand scheme. I know reading the press the numbers seem big, but proportionally they aren’t.

People seeking asylum in the UK tend to do so for one of two primary reasons, language or family ties. Neither change no matter how many “deterrents” you use. It isn’t for benefits, where the UK provides fewer than other countries, and, no, asylum seekers can’t get council houses.

What happens in reality with these current types of proposals is you create a never ending cycle of exploitation. The reasons people want to seek asylum in the UK haven’t changed, so you are, in effect, just forcing them back into the hands of gangs.

So what are the solutions?

When I talk about poverty it’s inevitable that people latch onto only that point and start shouting about “economic migrants”. First off, 98% of people crossing the channel seek asylum, and the vast majority receive it, because they need it.

Secondly, poverty is a key driver of instability within a nation state, which tends to lead to conflicts, persecution etc. It is no surprise that one of the largest refugee movements at the moment is from Venezuela for example where Maduro’s policies drove people into poverty.

Any genuine solution to reducing channel crossings needs to start with two accepted facts. You need to recognise that people seeking asylum have good reasons for doing, and for where they do so. It’s no good saying they should stay in other countries. Not every country which is safe for one person is safe for another. Across Europe there are issues with individual countries, including France, Germany et al, which means that some asylum do not feel safe there.

It is also worth flagging the point, again, that you can’t just return people to another country without that country’s agreement. So, for example, saying that asylum claims from people who have traveled through “safe countries” will be rejected doesn’t make sense. You are either talking about sending people to a country which may not have agreed to take them, leading to even more issues, or returning them to their country of origin, as with the Albanian agreement, where the same reasons they left to seek asylum exist.

The second thing you need to factor in are the issues within the host country itself. There is no point in just lecturing people that a country needs to take more asylum without addressing concerns, such as the cost of living crisis for example.

On that note, one way to actually help would be to take some of the hundreds of millions of pounds currently wasted on “deterrents, detention and deportation” and use it to invest in communities to bolster infrastructure to benefit everyone.

You will always get those who say things like “well, how many will you put up in your house”, but the Homes for Ukraine scheme has shown that, in general, you can’t rely on public goodwill for something which requires serious state investment and resourcing.

What is without question is we need a solution. No one should be put in the position of being preyed on by gangs. Just saying “they can’t come here” isn’t a way to reduce crossings though. Already about 86% of refugees are in developing countries.

If developed countries focused more attention on policies of inclusion not only would they actually reduce costs, and increase the economy, giving refugees the right to work for example reduces “tax burdens”, increases the workforce and stimulates the economy...

They would also reduce the hold which criminal gangs have over people, with the knock on effect of reducing their hold elsewhere, you are removing a major revenue stream for them, creating a potential overall reduction, and therefore increase safety.

I told you that there weren’t simple solutions. There is no one single silver magic bullet to reducing the need for people to make channel crossings. There’s no “soundbite” or “three word answer”.

Anyone trying to persuade you otherwise is feeding you a line. 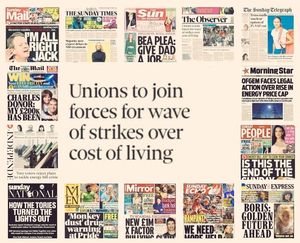