Who is Liz Truss, the new leader of the Conservative party who inherits a country in crisis after Boris Johnson and how did she get to become the new PM?

The United Kingdom’s next prime minister will be Liz Truss. After a two-month contest, Conservative Party members have chosen her as their new leader. All that remains is for Truss to travel to Balmoral in Scotland where she will be formally invited by the Queen to form a government.

Truss will become the Conservatives’ fourth leader and prime minister in just over six years. She’s Queen Elizabeth’s fifteenth prime minister, and the third woman to hold the job.

Her rapid rise to the top started in 2010 when she was first elected to Parliament. Four years later, she joined David Cameron’s cabinet as environment secretary. She went on to serve as justice secretary and then chief secretary to the Treasury under Theresa May, and as international trade secretary and foreign secretary under Johnson.

Truss is an avowed economic libertarian. She enthusiastically supported remain in the 2016 referendum on the UK’s membership of the EU but subsequently became a born-again leaver. She has preached the benefits of Brexit and adopted a notably hawkish stance against Russia over its invasion of Ukraine.

Truss’s brand of economic libertarianism, political optimism and hawkishness proved decisive in the 2022 leadership contest. Despite a number of gaffes and U-turns, her tax-cutting agenda, coupled with her erstwhile loyalty to Johnson, gave her a substantial edge over Sunak.

As the new prime minister, Truss faces a number of daunting challenges: rampant inflation, eye-watering energy costs, deteriorating public services, ongoing industrial action and an independence-minded government in Scotland. Overseas, she must contend with the war in Ukraine and troubled relations with the European Union.

Why did Boris Johnson resign?

Truss will replace Boris Johnson, who was compelled to step down as Conservative leader and prime minister in July. A mass resignation of around 60 ministers and other political appointees, including Sajid Javid, the health secretary, and Rishi Sunak, the chancellor of the exchequer, came in protest to Johnson’s mishandling of a scandal involving Chris Pincher, the government’s former deputy chief whip.

He resigned from that role after being accused of sexually assaulting two men at a private members club. Pincher said he had “drunk far too much” and embarrassed himself, but denied the accusations and remains an independent MP. Further historic allegations of sexual misconduct emerged, raising questions about what Johnson knew, and when.

Downing Street initially denied that Johnson had been aware of these allegations when appointing Pincher as deputy chief whip. This denial was later shown to be false. Johnson also faced criticism for not immediately suspending Pincher from the party, only doing so after coming under intense pressure from within his own ranks.

But Johnson’s hold on power was tenuous even before the Pincher affair. A string of scandals demonstrated his lax approach to standards in public life. A number of Conservatives had called on him to resign over partygate – revelations about boozy gatherings in Downing Street in defiance of COVID restrictions, which ultimately led to police fines for Johnson and his wife.

Johnson’s own conduct had became both distracting and cumulatively indefensible. No less than 41% of Conservative MPs voted against him in a no-confidence vote at the beginning of June.

Johnson’s perceived lack of direction was a second source of discontent. He could claim to have “got Brexit done”, but what was his government going to do next? There was much talk of “levelling up” but little of practical substance. The problems were compounded by the looming cost-of-living crisis and the apparent chaos of his Downing Street operation.

Lastly, Johnson had come to be seen as an electoral liability. The Conservatives had been behind Labour in the opinion polls since the end of 2019, and more recently had lost a string of byelections to Labour and the Liberal Democrats. Conservative MPs, especially in marginal seats, were worried.

The Pincher affair proved fatal for Johnson because it tapped directly into these sources of discontent. Johnson’s supporters claimed he was stabbed in the back by his own party – but after repeated stumbles, he had simply tripped onto his own sword.

Why hasn’t there been an election?

The choice of Johnson’s successor was always going to be a matter exclusively for the governing Conservative party. The UK is a parliamentary system in which the government of the day is formed by whoever can command the confidence of the House of Commons. In practice, this usually means the leader of whichever party won a majority of seats at the last general election.

Whenever a prime minister steps down midway through a parliament, there is no constitutional need to hold a new general election. Instead, the incumbent governing party chooses a new leader and thus the new prime minister.

“Takeover” prime ministers who assume office in this way are not unusual. Since 1945, eight premierships began with victory in a general election, while nine started midway through a parliament.

Political parties have their own rules about how to select a new leader. Before 1965, new Conservative leaders emerged from consultations with senior party figures. From then until 1998, new leaders were chosen exclusively by Conservative MPs. Thereafter, they have been elected via a two-stage process in which MPs select two candidates, and then party members – for the Conservatives, around 180,000 dues-paying members – make the final choice.

Eight candidates participated in the first stage of the contest to replace Johnson. After five rounds of voting among Conservative MPs, Sunak, the former chancellor, came top with 137 votes (38.3%), Truss, then foreign secretary, came second with 113 votes (31.6%), and Penny Mordaunt, minister of state for trade policy, was eliminated from the running with 105 votes (29.3%)

There then followed a ballot of party members, with Sunak and Truss spending much of July and the whole of August appealing for support. In the end, Truss beat Sunak by 57% to 43%.

Truss’s immediate task will be to form a government. Who she includes in her cabinet will set the tone for her relations with her party. Truss won the leadership because she was the Conservative members’ choice – not her MPs’ preferred candidate. Any honeymoon period could be brief, especially if the Conservatives continue to languish behind Labour in the polls.

Above all, Truss will need to manage her party’s expectations about the next general election. Every takeover prime minister is greeted by calls for an immediate election on the constitutionally spurious grounds that they haven’t been elected.

At the same time, takeover prime ministers want their own mandate from voters. It enhances their authority, and it enables them to start with a fresh set of manifesto commitments.

Truss has the power to call a general election at will. If the Conservatives enjoy a sustained bounce in the polls, Truss will need to calculate whether it’s better to go to the country sooner, in the knowledge that the economic situation might deteriorate, or to wait until the last minute, in the hope that things might improve.

If there is no such boost, those calculations will be moot, and the 2019 parliament is likely to run a full term. Voters will then have their chance to pass a verdict on Britain’s new prime minister no later than January 2025. 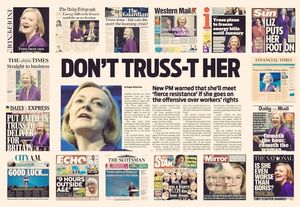