With the election of Liz Truss, the right-wing British nationalist extremists of the ERG are now in charge of the UK. The Tories have completed their transformation into Ukip.

To absolutely no one’s surprise, Liz Truss has been elected by the predominantly white, elderly, middle class and Southern English membership of the Conservative party, and on Tuesday she will travel to Balmoral to be appointed by the other Liz as the next Worst Prime Minister of the increasingly Disunited Kingdom. Truss won by a far narrower margin than had been forecast, because it seems that even Conservative party members took a dislike to her the more that they saw of her, a pattern which will assuredly be repeated across the entire population.

Truss managed to win just 57% of votes cast on a turnout of 83%, a lower percentage than any Conservative leader who was elected by a ballot of party members – even the terminally dismal Iain Duncan Smith did better. Truss obtained the backing of just 47% of Conservative party members meaning that she herself falls well short of the standards of at least 50% of the entire electorate that Truss reportedly plans to demand of voters in Scotland in a second independence referendum.

Truss inherits a bitterly divided Conservative party where a majority of her backbenchers preferred her rival Sunak. She also has a former Prime Minister who is returning to the back benches and who has made no secret of the fact that he wants his old job back. Yet Truss shows little sign of being interested in bridging the divisions within her own party, never mind reaching out to those who don’t support the Conservatives and have never been reconciled to Brexit. As soon as the result was announced she shot to the stage without so much as glancing at her defeated rival never mind having the good grace to shake his hand.

She began what we are supposed to call a speech, with her strange monotone robotic delivery by noting that during the leadership contest, “We have shown the depth and breadth of talent in the Conservative party.” It was a rare moment of candour and insight. The Conservatives had shown that they have no depth and are bereft of talent. In a vacuous collection of content-free slogans, she went on to promise her government would deliver, deliver, deliver. They’ve certainly succeeded at delivering raw sewage into rivers and onto beaches. She has known for two months that she was going to win. Two months in which to prepare for a five-minute speech which would set the stage for her leadership. She couldn’t even manage that.

Over the next couple of days, we will see the revealing of the horror show that will be Truss’s cabinet. Shortly after Truss’s victory was announced Home Secretary Priti Patel submitted a letter of resignation and said that she intended to return to the back benches. The move came after a number of briefings by the Truss campaign which strongly suggested that Patel would lose her job in Truss’s new cabinet. Patel was an unspeakably cruel Home Secretary and won’t be missed by anyone with a shred of decency. The news caused widespread rejoicing, right up until the realisation sank in that the new Home Secretary is likely to be Suella Braverman. Just when you think that the Hellmouth has closed it opens up again and an even worse demon comes crawling out. The next Worst British Prime Minister in modern times is set to appoint the next Worst Home Secretary in modern times. Remember when we were all horrified about how nasty Jack Straw and Theresa May were? How naive we were.

That’s where British politics is now, Priti Patel resigned because if she hadn’t she’d have been sacked for not being right-wing enough. Everyone thought that there could never be a worse Home Secretary than Priti Patel, architect of the despicable Rwanda policy, but along comes Suella Braverman saying, “Hold my eh, whatever this is… I think it might be some sort of law book, but I’ve only ever used it to prop up a wonky kitchen table.”

Braverman is the Attorney General whose big idea for dealing with government policies which are found to be unlawful is to prohibit government lawyers from telling ministers that their policies are unlawful. You don’t have to be a lawyer to know that ignorance of the law is no defence, but ignorance of the law is Suella Braverman’s operating principle. Braverman has consistently voted against laws to promote equality and human rights, voted against equal marriage for same-sex couples, and wants to take the UK out of the European Convention on Human Rights. Before she was eliminated as a candidate in the Conservative leadership contest, Braverman said that article 3 of the ECHR was ‘tying the government’s hands’.

Article 3 stipulates: “No one shall be subjected to torture or to inhuman or degrading treatment or punishment.”

If you feel that your government is being prevented from implementing its policies because of an international treaty prohibition on torture or inhuman and degrading treatment, it might just be your government’s policies which are the problem, not the human rights legislation that makes the policies unlawful.

To have Suella Braverman holding one of the great offices of state is possibly the grimmest indictment imaginable of contemporary British politics. God help us all. The only way it could get any worse would be to have Jacob Rees-Mogg as the business secretary and put in charge of employment rights and environmental protections. Oh, wait.

The right-wing British nationalist extremists of the European Research Group are now in charge of the UK. The Tories have completed their transformation into Ukip. We got into this position thanks to a combination of a sclerotic British constitution which is utterly incapable of holding power to account or putting limits on the power of the occupant of Downing Street, a system operating on privilege and patronage which perpetuates inequality and rewards greed. These shortcomings have been magnified and exacerbated by a media which sees its primary job as defending the status quo. If the BBC was actually doing the job we expect of it – to hold power to account, it shouldn’t be necessary for Led by Donkeys to spell out the realities of Johnson’s legacy. But the BBC thinks that the only power which needs to be held to account is the power held by the Scottish Government.

There are reports that Truss will be making a big announcement within the first few days of her leadership about the steps her government will be taking to tackle the frightening rise in energy bills. There are rumours of a price cap, which will be the very least that is required, although as always with the Tories the devil is in the small print. Nevertheless, it may win Truss some short-term plaudits, especially with the right-wing press, but it won’t last, no amount of gilding on this turd of a government can disguise its repellent nature. Truss and her ERG allies will soon be picking fights with Brussels, they will be coming for your employment rights and for environmental protections, and they will be attacking democracy itself in Scotland and undermining the devolution settlement. Truss’s political honeymoon will be as short-lived as the relief of everyone with a sense of decency and humanity when they heard that Priti Patel had resigned as Home Secretary.

Truss has won this election, and everyone else has lost. The Conservatives excel at mediocrity. Please make it stop. 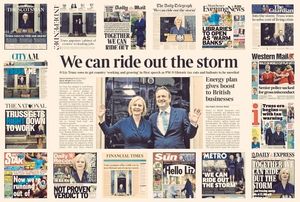