The Queen’s constant and reassuring presence at the centre of our national life was the thread that kept the UK Union together. The real challenge will be for King Charles III to continue to be that uniting force.

The sad news of the passing of HM Queen Elizabeth II marks the beginning of the reign of HM King Charles III. Inevitably this has led to speculation surrounding what kind of Sovereign he may be. Some are inclined to refer to his ‘black spider memos’ and receipt of ‘bags of cash from a billionaire Qatari Sheikh for his charities’ as evidence he will push boundaries. The supposed potential for controversy was sensationalised by a 2014 ‘future historic’ play written by Mike Bartlett, called King Charles III. The fictional play speculates what could happen when the King refuses to sign a Bill into Law, and explores the political and constitutional crisis that would follow – with the underlying question being what role and power should a 21st Century Monarchy have in the United Kingdom?

The reality is set to be a lot less controversial. King Charles has been consciously aware of his critics, and quick to offer reassurance as to the role of continuity he will now play.

In his first address to the country, he stated:

💬
“As The Queen herself did with such unswerving devotion, I too now solemnly pledge myself, throughout the remaining time God grants me, to uphold the Constitutional principles at the heart of our Nation.”

In recognition that his role must now change, he added:

💬
“It will no longer be possible for me to give so much of my time and energies to the charities and issues for which I care so deeply. But I know this important work will go on in the trusted hands of others.”

These reassurances were reiterated during the King’s address to the Privy Council at the Accession Council meeting, on 10 September 2022. Here he stated:

💬
“I am deeply aware of this great inheritance, and of the duties, and heavy responsibilities, of sovereignty...in taking up these responsibilities I shall strive to follow the inspiring example I have been set in upholding Constitutional Government, and seek the peace, harmony and prosperity of the peoples of these islands.”

For the Monarchy to survive, it must continue to be the constant and reassuring presence at the centre of national life, in being conscious of public morality – but whilst also continuing to respect the constitutional rules. It is for these reasons that HM King Charles III has been quick to publicly offer reassurance that he will change and continue to respect the norms of political neutrality, and in law making.

Whilst his accession marks a new beginning, it will be one that has to follow the same ‘rulebook’ that governed his mother, Queen Elizabeth II’s reign, for its survival.

What are the rules governing the King’s Reign?

Whilst he becomes Head of State, being a ‘Constitutional Monarchy’ means that the ability to make and pass legislation resides with the elected Parliament of the day. Since the reign of King John and the 1215 signing of Magna Carta, the UK has had a system of Monarchy limited by Law. Whilst the Monarch does have to give ‘Royal Assent’ to a Bill before it can become Law, today in the UK this is considered a ‘rubber stamping’ formality – with no real input from the Monarch, who by constitutional convention, should always approve the Bill on its passage into legislation. After all, the last Monarch to refuse Royal Assent was Queen Anne, when she blocked a Scottish Militia Bill in 1707/1708.

Today, for the Constitutional Monarchy to survive the King must be an uncontroversial figure and remain politically neutral. History tells us what happens when a Monarch tries to wield too much arbitrary power. For example, the tension between the Crown and its subjects was seen when King Charles entered Parliament in 1642 to arrest parliamentarians for treason. The Revolution, and for a brief period the UK becoming a ‘Republic’ under Oliver Cromwell, serves as a reminder of what happens when a UK Monarch tries to arbitrarily enforce their powers. The restoration of the Crown in 1660 with King Charles II; the case of Proclamation in 1611, which stated that a King cannot make law without the consent of Parliament; and the passing of the Bill of Rights in 1689 force the Crown to accept the will of the UK’s democratically elected Parliament.

Some have speculated as to the UK Monarch’s power to summon and dissolve Parliament. By constitutional convention (otherwise known as a constitutional custom) and as reflected in the Supreme Court’s Miller II judgment, the Monarch exercises this function on the advice of the Prime Minister. It used to be the case that the Fixed-Term Parliaments Act 2011 provided some legislative reassurances regarding what should happen. However, the new Dissolution and Calling of Parliament Act 2022 reinstated the prior constitutional position. That being a revival of the prerogative powers of the Monarch to both call and end Parliaments. However, in reality, it is important to reiterate that this power is exercised by the Monarch at the request of his Prime Minister of the day.

Others have referred to the Sovereign’s power to go to war. It is true to say that war is officially declared in the name of Crown in the UK. After all, King Charles III becomes the new Commander-in-Chief of the Armed Forces. However, once again, constitutional convention dictates that the Sovereign would only declare war after receiving advice from his Prime Minister and Government to do so. Indeed, some constitutional commentators argue that there has been an extension to that convention in recent years, with the new rule being that the Prime Minister should only advise the Crown to declare war after first putting the question to a vote in the House of Commons. It is likely that that constitutional convention will continue under the reign of the new King.

More practically, the new King signalled, prior to his accession, that he was aware that he would have to change and follow these rules. Up until now, these constitutional conventions had not applied to the new King Charles III during his time as Prince of Wales. In terms of future reform and ‘political meddling’ the former Prince had made it clear that he knew his approach had to change, and that he must maintain the status quo. During his 70th Birthday interview in 2018, the King dismissed concerns by stating:

💬
“I’m not that stupid. I do realise that it is a separate exercise being Sovereign. So, of course, I understand entirely how that should operate. The idea somehow that I’m going to go on exactly the same way, if I have to succeed, is complete nonsense. Because the two situations are completely different.”

These reassurances by the now King reassert his understanding that for the Royal Family to survive, neutrality must be maintained.

So, we can expect the new King to continue to respect the constitutional ‘rulebook’. Similarly, it is expected that he will be the constant and reassuring presence at the centre of national life, and be conscious of public morality.

Yet, we might expect him to be more active, conscious of societal changes, modernise, and follow less formalities. Some of those changes have already been seen, even in recent days. For example, in the first public broadcasting of the Accession Council by the BBC on Saturday, and when a member of the public kissed the new Sovereign on the cheek.

The new King has also signalled his desire to have a ‘slimmed down Royal Family’, with less working members. It is, therefore, likely that we will see role changes in the imminent future.

Other attempts at modernising and societal change could be seen in respect of the Commonwealth. For example, as Prince of Wales, he commented at the Commonwealth’s Head of Government meeting in Kigali, how the legacy of slavery needed to be confronted, stating:

💬
“I cannot describe the depths of my personal sorrow at the suffering of so many, as I continue to deepen my own understanding of slavery’s enduring impact.”

This had been an issue that his mother had not directly addressed at such meetings. Similarly, Prince William acknowledged, on a visit to Jamaica that the “appalling atrocity of slavery stains our history” and that slavery was “abhorrent...and it should never have happened”. During the visit, he similarly acknowledged individual Commonwealth States’ right to independently chose their own path, separate to associations with the Royal Family if they should so decide. Whilst further State departures from the Commonwealth are an inevitability, these manoeuvres are designed to try and modernise the Royal Family, reflect a generation change, and make the Monarchy appear more progressive and ‘in touch’ with societal changes – ultimately for its longer-term relevance and survival.

Challenges for the new King?

The most seismic challenge the new King will face will be maintaining the status quo. Many British and Commonwealth citizens have never known a world without HM Queen Elizabeth II.

Many, I included, have also argued that she was ‘the thread’ that kept the UK Union together. Such was the popularity of the Queen that even Scottish Nationalists, who campaigned for Scottish Independence from the UK Union, conceded that HM Queen Elizabeth II would have to continue to be the Head of State for a hypothetical independent Scotland. The real challenge will be for King Charles to continue to be that uniting force.

More broadly, in respect of the Commonwealth, the passing of the Queen is likely to reignite the debate surrounding whether some jurisdictions want to continue their association with the British Royal Family.

On a practical level, throughout her 70-year reign, the United Kingdom of Great Britain and Northern Ireland became accustomed to HM Queen Elizabeth II being the one who speaks for the country during times of celebration and in times of loss and grief. The new King will have the added challenge of connecting with the national psyche by being the replacement for the Queen’s constant and reassuring presence at the centre of our national life. 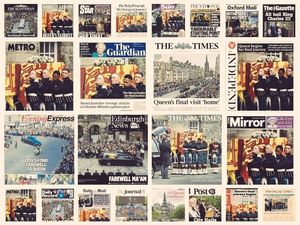 Why Charles is already king and other key constitutional questions answered