There’s a mountain to climb but there are positive signs for the opposition in the first few weeks of Liz Truss’s government.

Keir Starmer, the next British prime minister? A cautiously optimistic mood prevails at this year’s Labour Party conference in Liverpool. Yet hope is tempered with fear, befitting a party that has contrived to lose eight of the last 11 general elections.

The scale of the electoral task confronting Labour makes realism – not always the party’s greatest asset – the right approach. To win an outright majority, a gain of 124 parliamentary seats is needed. That would require a swing of 10.5% on Labour’s 2019 election result – which is larger than the one achieved by Tony Blair in his 1997 landslide.

Yet there is much to cheer Labour in an electoral landscape transformed since its December 2019 nadir. The Wakefield by-election last June saw a 12.7% swing from the Conservatives to Labour – a nationwide swing on that level would be enough to put Keir Starmer into 10 Downing Street with a slender overall majority. Opinion polls show Labour with an average 8% lead over the Conservatives. That amounts to a 10% swing to Labour since the election. A poll released on the Monday of the conference put Labour 17 points ahead.

Starmer’s net ratings are positive, with more voters thinking he is doing a good job than a bad one. His predecessor entered the last election campaign with the lowest leadership satisfaction rating of any opposition leader since the 1970s.

The likeliest outcome at the next election still appears to be a hung parliament. With the Conservatives bereft of potential coalition partners and Labour likely to be the largest party, Starmer seems the most likely candidate for PM. A minority or tiny majority Labour government might be unstable but there is always the Harold Wilson 1964-66 option of calling another election soon after to win a big majority.

Bruised by the regularity of defeat, however, Labour can barely contemplate a single term, let alone a bigger vista. There remain electoral problems, including Scotland, for starters, where Labour holds just one parliamentary seat.

But Starmer may be a lucky general. He survived Labour’s last conference in Liverpool in 2018, becoming leader thereafter, despite having achieved the remarkable feat of making the party’s Brexit policy even more confusing than it had been prior to the meeting. Going off-script, he offered the conference hall the possibility of Labour supporting a second referendum, with Remain as an option. The country preferred clarity and voted Conservative in droves.

Starmer may be fortunate in how the Conservatives’ reputation for fiscal responsibility has been blown off course by headwinds even stronger than the gales swirling around the Liverpool conference arena. Uncosted tax cuts? Sure. Lockdown furlough scheme of £80 billion? Not a problem. Help with your energy bills to the tune of £100 billion? Entirely doable. Debt at 100% of GDP. Nearly there.

For years, Labour was assailed by the Conservatives for reckless spending proposals. Yet the stringencies of contemporary times mean the old financial rules of the game no longer exist. Borrowing and spending way beyond what was previously deemed affordable has become normal. That provides cover, even immunity, for Labour’s own ambitious expenditure proposals.

Some of those big spending plans involve a green revolution. Driven by the ever-eager Ed Miliband, Labour promises to turn the UK into a green superstate, approaching energy self-sufficiency by 2030. It’s a green version of Wilson’s winning “white heat of technology” rhetoric of the 1960s. The promise of 200,000 green jobs seems a suspiciously round figure but Labour is at least offering a vision. And wind turbines seem rather less earthquake-prone than fracking.

That said, only 12% of Conservative voters listed climate change in their top three issues at the last election, compared to 36% of Labour supporters. Labour needs to camp directly on precious Conservative territory, such as law and order. Some 36% of Conservative supporters placed crime among their top three issues in 2019, second only to Brexit. Labour needs to woo them. Thousands more police officers are promised but a return to Blairite “tough on crime, tough on the causes of crime” mantras may be needed.

Starmer spent the first two years of his leadership putting the party under new management, marginalising the Left (but not all its ideas) instilling internal discipline and stressing his party’s principles of decency, the common good and patriotism. There remain significant gaps to plug before Labour fully looks a government in waiting – and Starmer still needs Trussonomics to fail. But at least the faithful will be leaving Liverpool with, to paraphrase a certain local song, hope in their hearts. 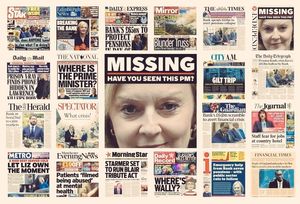