Liz Truss finally made a public appearance after keeping quiet for a week while her government burned down the economy, trashed the pound, and threatened to tank pension funds.

Liz Truss finally made a public appearance after keeping quiet for a week while her government burned down the economy, trashed the pound, threatened to tank pension funds and saw an emergency intervention from the Bank of England in an attempt to protect the British economy from the British Government. Interest rates seem likely to rise to 6%, their highest level for years, which will translate into large increases in mortgage payments and rent costs, adding a housing crisis to the energy and food price crises we already have to endure.

But according to Truss none of this is her fault. To call her series of interviews with local radio in England car crashes is to woefully under estimate the sheer horrific awfulness of her performance¹. Sure, it was a car crash, but only if your car had collided with a minibus carrying Freddy Krueger, Michael Myers, Buffalo Bill, Hannibal Lector, that guy from the Hills Have Eyes with the chainsaw, Pinhead, Doctor Doom, Davros, Doctor Evil, and Stephen Kerr who then chase you down the street screaming about ferries.

Chris Philp was one of the few government ministers who were prepared to do public interviews to defend this merdefest, and was excoriated on LBC radio by Nick Ferrari, who demanded that Philp stop treating listeners like fools as he vainly attempted to spout the unconvincing line that the self-inflicted disaster of Kwarteng’s mini-budget/maxi-damage was really down to Putin and assorted other global problems.

Meanwhile in Scotland in this supposed Union, in the midst of an economic crisis, the meltdown of the pound and the threat that hundreds of thousands may no longer be able to afford their mortgage payments or rent, a tanking pound that will translate into even higher inflation, food bills that will soar even more, and the threat of pension funds nose-diving, the opposition parties and their client journalists are obsessed with ferries and procurement processes² and amounts of money that don’t even register compared to the magnitude of the many billions that the Conservatives are costing us all. It’s so embarrassingly parochial and infantile. Yet more proof that Scotland cannot have adult politics and a grown up media until we escape the clutches of this appallingly dysfunctional Westminster system. It’s not just Philp who is treating us all like fools.

A 40p collapse in the pound this year suddenly makes the NHS very cheap for private healthcare companies in the USA to own. Truss and her allies will be looking to sell off the last few remaining public assets to pay for the mess that they have created. They will squeeze public services past the bone, and will make all of us pay for years to come, all so that wealthy Conservative donors can buy a bigger yacht and a third holiday home with the tax breaks that we are all paying for.

This is what this so-called Union has in store for us, impoverishment and the destruction of our civil and employment rights, the neutering of the Scottish Parliament and the reduction of Scotland to the status of a ‘historic region’ of a “single British nation” with no more political import than Mercia or Wessex.

This is a UK where apologists for this woeful government like Allison Pearson of the Telegraph³ tell us: “When I listen to the new Italian prime minister speak, I hear mainstream Conservative values that millions of people share.” That’s the actual far-right extremist and so close to fascist that it makes no difference Giorgia Meloni, who now seemingly counts as ‘mainstream Conservative’ in this UK. ‘I can’t tell the difference between a fascist and the modern Conservative Party’, is not the great killer point that Pearson seems to think it is.

Remember how in 2014 Better Together told Scotland that we needed the UK to protect us from political extremism. Fascism is no longer just knocking at the door, it has already been invited in and is making itself cosy. The case for Scottish independence has never looked stronger. The supposed economic strength of the UK has evaporated. Nicola Sturgeon and Kate Forbes seem safe pairs of hands by comparison to Liz Truss and Kwasi Kwarteng.

It’s not just the pound which is plummeting, so is support for the Conservatives in opinion polling. A YouGov poll⁴ published on Thursday gave the following astonishing results, Lab: 54% (+9) Con: 21% (-7), LibDem: 7% (-2), Green: 6% (-1). [The figures in brackets are changes from the previous YouGov poll published earlier this week. Fieldwork for this new poll was carried out on Wednesday and Thursday.]

Labour are now an incredible 33 points ahead of the Conservatives in voting intention. We have not seen anything like this since the years leading up to the Blair landslide of the late 1990s. Another poll out on Thursday, this time from Survation⁵, put Labour 21% ahead of the Conservatives. This is wipeout territory for the Tories. Just 37% of 2019 Tory voters say they would vote for Liz Truss’s party now. Lewis Goodall of Sky News points out that even Blair only had a 13% lead in 1997, and current polls point to a Labour majority of 300. The polls may be volatile right now due to the shock of the Conservatives’ self-inflicted economic crisis and are likely to settle down, but this is a polling level that the Conservatives are going to be unlikely to recover from.

Subsamples must be taken with more than a grain of salt, but for what it’s worth the Scottish subsample in the Survation poll shows 51% SNP, 29% Lab, 11% Con, 6% LibDem and 1% Green. That’s a 52% pro-independence vote and the probable annihilation of the Conservatives in Scotland.

However, there is no prospect of a General Election any time soon. The Tory turkeys will not vote for Christmas. We are going to have to endure this hideous government until it is forced to the polls in 2024. It would be nice to think that the long Tory nightmare was finally coming to an end, but Labour won’t take us back into the Single Market or Customs Union, never mind the EU, it won’t reform the House of Commons and will be as contemptuous of Scottish democracy as the Tories, and even in a best case scenario, the electoral pendulum in England will inevitably one day swing back to the right and we will be in for a Tory nightmare all over again. There is only one way to break this vicious cycle, and that’s with independence.

You know things are truly dire for the Conservatives when Liz Truss consents to be interviewed by Reporting Scotland and they don’t even give her the chance to attack the SNP about the ferries. 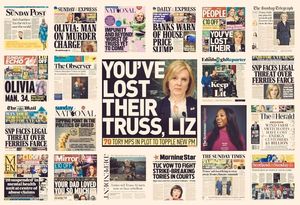