When the strong help the weak, it makes us all stronger


“After the right turn, the U-turn. But Kwasi Kwarteng’s panicked climbdown still leaves £43bn in tax cuts. Growth won’t pay for them so spending cuts worse than austerity will – an amount equivalent to closing every English school.

“By rejecting a new windfall tax, the Chancellor is effectively handing billions to oil and gas tycoons. Meanwhile, the typical family on Universal Credit face losses of up to £2,000 a year if, as seems possible, the government links benefits to earnings, not prices.

“With the UK facing a one-dollar pound, £3tn in debt and a million more unemployed, we have a government that destroys accountability, sacks trusted public servants, and lights fires precisely when and where they should be putting them out.

“It’s all there in Britannia Unchained, co-authored by Liz Truss and Kwarteng: the pound can collapse, borrowing and mortgages can soar, pensioners can freeze, kids can go hungry, as long as the economy is ripe for venture capitalists freed from regulation and, ideally, tax.

“But even venture capitalists know they don’t get rich on their own. Public investment – in education, infrastructure, skills, and health – is vital to create growth.

“It’s time this government remembered that age-old truth: when the strong help the weak, it makes us all stronger.” 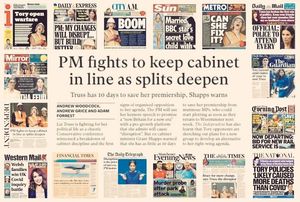