Preparing to win the next UK General Election

It is safe to say now that the Conservative party has made a catastrophic mistake by choosing Liz Truss as its leader and as Prime Minister.

After just four weeks in office – during two of which there was no government business due to the royal commournathon, Truss has taken the polling figures of the Conservatives to depths which have not been seen since the months prior to Labour’s electoral landslide of 1997 – a General Election which saw the Conservatives wiped out in Scotland, losing all eleven of its Westminster seats, a disaster which it took the Scottish Tories almost 20 years to briefly recover from.

Truss now has an approval figure of -70 in Scotland¹, a mere one point higher than Boris Johnson in the final weeks of his time in Number 10.

A party conference is typically a time when a political party puts on a display of unity, that is particularly the case when the party holds its conference with a new leader who was chosen by a vote of party members a mere couple of weeks before the conference. This should have been a triumphant occasion for the Tories with both party and the wider electorate giving the new Prime Minister the benefit of any doubt as she enjoyed a honeymoon period boost in the polls.

Instead, the conference, despite the ritualistic applause and senior Tories performatively telling the press that Truss had nailed it with her conference speech and its cosplay Thatcherism, was marked by muttering, plotting and the despair of Tory MPs staring at the likely loss of their seats. In just a few short weeks, Liz Truss has managed to restore the fortunes of an aimless Labour party and turn its personality-free zone of a leader into the most likely winner of the next General Election.

This has important implications for a General Election campaign in Scotland which could very well be fought as a de facto referendum on Scottish independence if, as most commentators appear to believe, the UK Supreme Court rules against the Scottish Government in the IndyRef case.

Until now the assumption has been that the Labour party would continue to struggle to establish electoral credibility among voters in England and the most likely outcome of the next UK General Election would be yet another Conservative government. However, the rapid and almost total implosion of Truss’s administration and her inability to rally her own party behind her never mind the wider electorate means that a Labour victory is a very real possibility. Indeed a recent poll found that Labour had a lead over the Conservatives in excess of 30% and could repeat Tony Blair’s historic landslide victory of 1997, and most likely prove to be equally disappointing in office.

Be that as it may, Labour’s resurgence means that the independence movement will not be fighting a campaign on the basis of independence vs an unpopular right-wing Conservative Government with very little support in Scotland. Labour will be promising all sorts of wide-ranging changes as they always do when they are in opposition, and even though bitter experience has taught us that Labour rarely follows through once it has achieved power and even when it does it is in a half-hearted, watered down and limited way, as we saw with Blair and devolution and reform of the House of Lords, some people will still be seduced by Labour’s message.

The key point that we as independence supporters need to establish is that the election of a Labour government will not bring about the fundamental and radical transformative change that is so desperately needed. Labour’s much heralded Constitutional Review does precisely nothing to alter the House of Commons and notably shies away from proposing the introduction of a more proportional voting system for Westminster elections.

This means that even in as best case scenario, with a Labour party which does actually fulfil its opposition promises once it secures its long-awaited majority, the electoral pendulum will eventually swing back in the other direction in England and we will once again be confronted with a majority Conservative government in Westminster elected by a minority of the electorate, and just as we have seen in recent years with Tory attacks on the supposedly permanent devolution, that Conservative government will enthusiastically do its utmost to undo and undermine all the changes that Labour has introduced.

Any increase in power for the devolved parliaments which a new Labour government might introduce will remain at the mercy of a future Conservative government. Without fundamental and far-reaching reform of the House of Commons, which Labour is not proposing, devolution is unable to do what its proponents in the 1980s and 1990s promised that it would do – which is to protect Scotland from the malign effects of a Conservative government that Scotland didn’t vote for.

We already know that there is one right-wing British nationalist sacred cow that Starmer has pledged to leave well alone. A Labour Government in Westminster will not attempt to revisit the question of EU membership and will not even seek to rejoin the customs union or the Single Market. Instead, Starmer has pledged to “make Brexit work” , which is a bit like vowing to run a marathon with a broken leg. Brexit cannot be made to work in the same way that you cannot make a faulty television set work by attacking it with a sledgehammer. Brexit is in itself a fundamentally broken thing, it cannot be ‘made to work’, yet with Labour Scotland is going to be stuck with it just as we are stuck with it with the Tories.

There is only one way in which Scotland will be able to restore a closer and more economically and socially productive relationship with Europe, and that is with independence.

We also know that Starmer’s Labour party is just as dismissive of Scottish democracy as the Conservatives are. We have seen this in Starmer’s refusal to accept the mandate for a second independence referendum given to the Scottish Parliament by the electorate of Scotland in the Holyrood election of May last year. It is no democracy at all if the outcome of a Scottish election is only accepted by Westminster if Scotland votes in a way which the ruling party in the Commons finds acceptable. We have also seen it in the willingness of the Labour party in Scotland to co-operate with the Conservatives, even to stand candidates with links to the sectarian British nationalist supremacist Orange Order, if it means keeping the dreaded SNP out of power. Labour can’t legitimately pose as the champion of Scotland against the Tories when it is hand in glove with the Tories in local authorities across the country.

Tory or Labour, what we are campaigning for is the security of democracy itself in Scotland. A Labour victory at the next UK General election cannot guarantee that, only independence can. 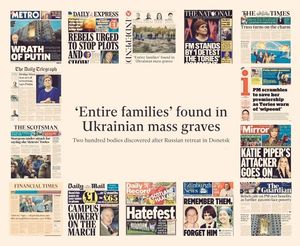