No matter whether a system is democratic or undemocratic, a bad leader’s period in office could leave millions of broken lives in its wake.

Ah, Liz Truss. The woman whose name is, funnily enough, becoming a byword for Western resilience as the 20th national congress of the Chinese Communist party meets this weekend for the almost-certain coronation of Xi Jinping as China’s potential ruler-for-life.

At this moment, Ms Truss’s intersection with Western resilience appears chiefly to mean that democratic countries such as Britain should be thankful they have terrible leaders so long as they know change is possible. In time.

This is a layered and contested argument.

Gideon Rachman, the Financial Times’ acutely plugged-in chief foreign affairs columnist, says in his latest piece that he’d rather have Liz Truss than Xi Jinping as a leader. His reasoning is as follows: the democratic British mess is preferable to China’s authoritarian model.

💬
“In a democratic society, a leader with Xi’s chequered record would be open to challenge and removal. In today’s China, however, it is impossible to have an open debate about what Xi has got right and wrong. His reappointment this week is mainly a sign of his success in centralising power and suppressing opposition. Indeed, just to make sure, there has been an intensification of repression in the run-up to the congress. Unlike Truss, his speech will not be interrupted by people shouting: ‘Who voted for this?’”

That’s true, except for a basic fact. Ms Truss became prime minister because of a selectorate — an incredibly small number, just 80,000 or so Truss-supporting members of the governing Conservative Party. While Ms Truss’s Conservative Party won an emphatic election victory in 2019, it was then led by a different leader and with a much different manifesto than Ms Truss’s libertarian approach to governance.

Consequently, Ms Truss herself has little or no personal mandate for sweeping change but she’s still trying to push her agenda through — no matter the disaffection or market effects, or indeed the undemocratic nature of her policy thrust.

The Conservative Party has a mandate; Ms Truss does not.

It would be short-sighted not to recognise the limits of democratic systems, which throw up bad leaders (coming through the revolving door) just as much as authoritarian ones. That you can remove a bad leader in a democratic system is some comfort, but it’s worth bearing in mind it doesn’t always happen quickly enough to pre-empt their effect on millions.

No matter whether a system is democratic or undemocratic, a bad leader’s period in office could leave millions of broken lives in its wake. 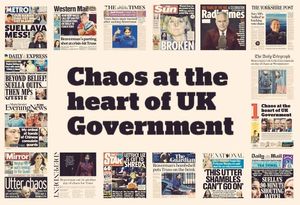