Party still comes before country and constituents and democracy to the Conservatives. The Tories would do anything now, including giving Boris Johnson another go at being PM, to avoid annihilation in a General Election.

The Star newspaper had set up a live feed of a photo of Truss beside a lettuce and a caption asking which would last longer. Well, now we know, the lettuce wins hands down. This may mean that the lettuce will be the next Prime Minister, and it would certainly make a better job of it than Truss did.

As Mhairi Black MP tweeted, this feels like the Tories had signed up for a month’s free trial and have only just remembered to cancel it. Truss’s six-week reign as PM also included 10 days off for national mourning and two weeks off for the conference season. She worked just 12 days as PM during her time in office.

Truss did not apologise in her brief resignation speech, none of it is apparently her fault. Shockingly, but not surprisingly, the Tories do not want a General Election but are planning an internal party lettuceship election to stitch things up amongst themselves. According to the Times¹, Boris Johnson plans to stand. May all the gods help us.

This is of course most likely what Johnson had in mind all the time when he backed Truss for PM, it stuck the knife into Sunak, which would have been reason enough, but by backing a weak candidate he knew was unsuitable for the job he could position himself for a return to power once Truss failed. Although it’s unlikely that even Johnson realised just how quickly Truss’s administration would implode.

Since being forced out of office Johnson has been in the USA giving speeches at £150K a pop. He missed Wednesday night’s vote because he was on holiday in the Caribbean, but he’d probably have missed it anyway because he has missed every vote since July. He hasn’t stopped claiming his £84K salary though.

People briefing on behalf of Boris Johnson say he is expected to stand in the Tory leadership contest because, ahem, he believes it is a matter of national interest and for the good of the nation that he does so. Give me strength.

He’s getting his lying in early this time.

So there’s the Tories this week, wittering on about the need for calm and stability in government, and how next week they can give the country a sober and sensible head, and along comes that lying corrupt balloon and the Brexit circus of grotesques that he brings along in his wake.

There were reports on Thursday afternoon that the head of the 1922 Committee said that the membership would get a vote. These are the clowns who inflicted Truss on us, if there was any justice, the Tory membership should be banned from having any say on who becomes the new Prime Minister and should collectively be sent to the naughty step to sit in darkness and reflect on just how out of touch and outright nasty they are.

The Tories are now going to choose a new Prime Minister just six weeks after they chose the last one. The Conservatives are allowed to change their minds, but they insist that the voters of Scotland are not.

I cannot stress enough just how few f*cks I give about the opinions or feelings of a Conservative party membership which was entrusted with steering the ship of state and steered it straight into an iceberg, and now it seems that the Westminster system is going to let them do it all over again – and you know that they will give us back Boris Johnson, who was forced from office in disgrace just a few weeks ago. This is beyond absurd. At this rate, the next Prime Minister will be Murdo Fraser.

We need a General Election now if democracy is to have any meaning. As Nicola Sturgeon pointed out, Liz Truss is merely a symptom of a fundamentally dysfunctional Westminster system. Are there any Better Together types who still want to argue that Scotland could not possibly do better than this complete and utter sh*tshow? Because if they are still intent on arguing that – and you can bet that they are, they now have even less credibility and self-awareness than an ex Prime Minister who went head to head with a lettuce and lost. Do any of them have any nuggets of wisdom about those ‘broad shoulders’ of the UK to share with us? A written constitution does not seem like a bad idea at all at this juncture.

And right on cue up pops the perma-smug Andrew Bowie who tweeted: “Let’s get this done and get on delivering on the manifesto that we got elected on. That must be our focus after all this.”

Your party has had twelve years to ‘get this done’.

Twelve years, twelve years in which you have wrought economic and political havoc, and now you want to ‘get this done’? It’s your miserable party which is done, and along with it your career. We are sick of the Conservatives, sick of careerists and the revolving Tory door of talentless hacks competing to out Daily Mail one another – look where that has got us.

Even now, after all that has happened, it is striking that so many conservative MPs are still talking about what is “best for the party”. Party still comes before country and constituents and democracy. It’s not a General Election that is needed, it’s a revolution, and every single sitting Tory MP should be disbarred from standing for re-election.

But whoever takes over will inherit a divided and broken party which is unable to govern. The instability, the plotting, the sheer self-interested selfishness, the corruption and the traducing of democracy and standards of decency in government. None of it will stop. And on top of it all, we will have a government led by a Prime Minister who is implementing policies that no one has voted for, not even their own party. The infighting and navel-gazing will only continue while people freeze, food prices soar, and trade with Europe continues to fall off a cliff. 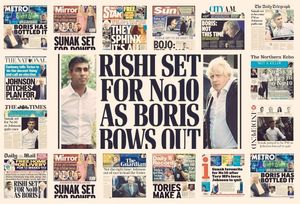