The vote results of the last mid-term elections have had political pundits, politicians, and the news media speculating that it’s the end of Donald Trump’s political dominance.

T he reality America must face, regardless of whether or not Donald Trump the man continues to be a political force, is that Trumpism is what truly vexes America, not Trump the man, and Trumpism will remain a political detriment in America until the emotions generated by Trumpism are addressed.

All the Americans who feared that America was on the road to transforming from a democracy to an autocracy, can now breathe a sigh of reduction, not relief. The last mid-term election’s results have reduced the immediate threat of autocracy but the emotion, the fuel, and the catalyst of autocracy, Trumpism, is still alive and well in America. And until Trumpism in America is addressed the threat of autocracy remains an active threat to American democracy. In order to understand and address Trumpism one must sift through the personality of Donald Trump, as well as many other images, symbols, and definitions associated with Trumpism.

10% of American Whites are hard-core racists who believe that there is an organized effort known as “The Great Replacement Theory”, informally referred to as white replacement theory, to replace American Whites as the dominant population of the United States. 30% of American Whites believe the inevitable racial and cultural demographic change in America is either a good or neutral fact of life thing. They don’t anticipate any racial or philosophical negative effects on American society. And 60% of American Whites, according to research by The Public Religion Research Institute, think racial, ethnic, and religious diversity makes America a stronger country.

The 60% are not racist and the majority voted for Barack Hussein Obama, an American Black with an African Islamic-sounding name, both times in 2008 and 2012 as President of the United States, but the 60% still fear being disadvantaged in a new racial majority America. If one thinks about it objectively how could non-racist American Whites logically not have questions, not have discomfort, or not be in fear, since for the entire 246-year history of the United States, the system of America has been designed so that the color of one’s skin determines one’s success or failure, who is a true American, and who is a second class American or a fake American.

The mid-term election results confirmed that neither autocracy nor racism lives in the hearts and minds of the 60%, their past votes for autocratic and/or racist politicians were motivated by a self-perceived threat and need to protect themselves. In the 2022 mid-terms, the 60% revealed that their Trumpism fear was trumped by their questions, discomfort, or fear about American democracy becoming American autocracy. The election results were truly a hallelujah moment for the soul of American democracy. The 60% said unequivocally that above their frustration with inflation and their Trumpism fear of racial and cultural demographic change in America, was their fear of losing small d democratic rights.

Unfortunately, as time progresses beyond the mid-term election the joy of the democracy hallelujah moment decreases, and the Trumpism fear of future racial and cultural demographic change increases. Because the mid-term elections did nothing to address American Whites’ Trumpism fear that they will be disadvantaged in the future people-of-color majority-populated America, or that 57% of American Whites think that America is in danger of losing its culture and identity. For the 10% “Jews will not replace us” hardcore American White racist, pure racism is the reason they fear demographic change. For the 60% it’s not racism it’s logical self-preservation for American Whites to question or have apprehension about how American society’s rituals, practices, symbols, cultural values, and laws would be impacted by a new population majority in a one-person-one-vote-counted majority rule nation.

It’s also self-preservationist for non-racist American Whites to question or have apprehension about how they will fare in a nation, whose tradition for most of its 246-year existence, is the racial majority legally oppressing the racial minority. Ironically before the 2022 mid-terms, the 60% consistently voted for politicians whose legislative proposals, policies, and judicial appointments attempt to reverse the civil, economic, and small d democratic laws, policies, and judicial appointments inspired by the Civil Rights Movement which legally guarantee, that not only American Blacks but that all Americans are treated equally regardless of who is the majority population in America.

If a change is not self-initiated all people, black or white, either fear, resist, or experience apprehension about change. Because all people believe they could lose something of value or fear they will not be able to adapt to the new change. Yale psychologist Jennifer Richeson and Maureen Craig, a graduate student working under her (now a psychology professor at NYU), conducted an experiment that confirms this.

Kari Lake is one of the politicians who will certainly keep trumpism going. | CREDIT: FLICKR/GAGE SKIDMORE

First, they had a group of American White participants read a summary from the U.S. Census Bureau projecting that American Whites would soon become a minority population. After reading this the group showed a greater preference for their racial group, responding positively to statements like “I would rather work alongside people of my same ethnic origin”, and they felt less warm feelings toward other races.

According to Craig, the results suggest that “a sense of a zero-sum competition between groups is activated,” when people hear about the rise of one group, they automatically fear it will mean a decline in their own.

The same results were found in a study led by psychologist H. Robert Outten who reported nearly identical findings in both Americans and Canadians. And apparently, it’s not just racial attitudes that shift when American Whites are exposed to the demographic data, political attitudes shift too. Richeson and Craig found that exposure to the census report caused American Whites to be more politically conservative on a variety of policies like affirmative action, immigration, defense spending, and health care reform. These shifts were not just limited to American Whites who believe in white supremacy, Richeson says “The point is that people who think of themselves as not prejudiced and liberal demonstrate these threat effects.”

Richeson and Craig also ran a version of the experiment where American Whites were told that even though the minority-majority switch was coming, the social order would continue to be the same and American Whites would still come out on top in American society. In that version, the vast majority of the negative results disappeared. “And that’s how you know its status threat” fueling the negative results, Richeson says. It’s also an indication that it would be wrong to accuse the 60% of being racist, like the racist 10% of American Whites, who claim America is on the road to hell because sub-human colored people are about to become the new majority in America.

In the 20th century, American Blacks were both legally and spiritually denied access to American society, so American Blacks needed the Affirmative Action initiatives of the 20th century to legally guarantee their inclusion in 20th-century American society. Now in the 21st century with the legitimate subject of reparations for past discrimination being discussed, non-racist American Whites are wondering if their traditional inclusion in and traditional access to American society will be taken from them, to compensate for racial sins of the past they personally did not commit, and since 57% of American Whites think that America is in danger of losing its culture and identity, they also fear the definition of the American Dream that they now know could change in the future with a new population majority. 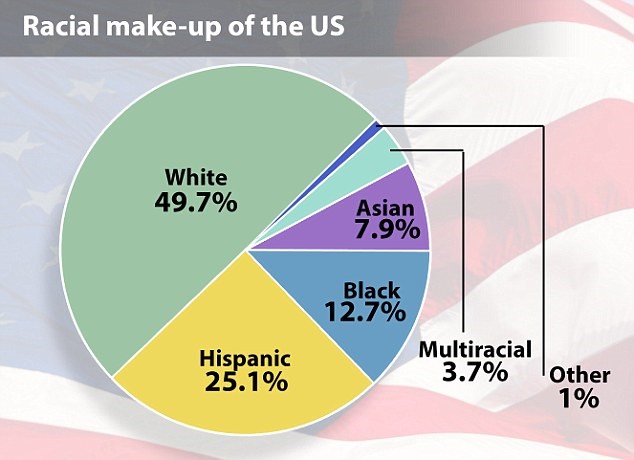 The pie chart above shows projected population figures for the year 2044 the first year that ethnic minorities will outnumber white Americans.

The 2022 mid-term election threat of American democracy becoming American autocracy was real enough to suppress the Trumpism fear of the 60% TEMPORARILY!!! The questions, discomfort, or fear of non-racist American Whites over racial and cultural demographic change will definitely resurface, therefore American society must take Affirmative Action to address and alleviate them. When America and 20 other countries, including Brazil, China, Germany, and South Africa among them implemented Affirmative Action initiatives in the 20th century, it was done to directly benefit a select group within a nation’s society and indirectly benefit the nation’s whole society.

Because no one skin color will be a 51% majority. America will become a true melting pot of different colored people, making any one particular skin color obsolete as a physical indicator of American citizenship. The new tangible American citizenship indicator has to be a trait common to all and easily attainable by all, a common language is that trait. No one can control what race or gender they are born to, everyone can control what language they freely choose to speak. In a multi-cultured multi-colored America, (E Pluribus Unum, out of many one), designating the English language as the official language of America will be the easily accessible common tangible trait that indicates American citizenship and binds all Americans together culturally.

Things everyone should know about COVID-19 (Part 2: Transmission & Protection)

He’ll be Congressman, not congressman-ish